The readme says: A = To move left
Oh, hey, the readme also says: S = To Move right
What it really does: These are the only two useful movement commands in the game. Actually “useful” is an understatement, since sidestepping is a surefire way to protect yourself from any weapon less powerful than an atomic bomb. You can walk right up in front of an enemy wielding his dreaded Mango Cannon of Doom, but as long as you’re sidestepping he will fail to hit you every single time. Maybe this was done to balance out the fact that you need to sit there and hold down the trigger for a good 10-15 seconds before an enemy will die. Good thing your gun has infinite ammo. 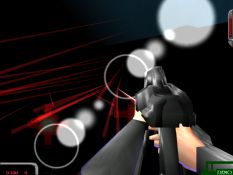 This is a very relaxed and laid back game engine. It doesn't worry too much about keeping you from falling through solid objects.

The readme says: C = To croch
What it really does: No, this button does not let you crouch. I think “croch” is simply a weird foreign word, working hard to gain the level of acceptance and appreciation enjoyed by its American counterpart, “crotch.” And apparently croching involves growing two inches shorter, and....uh, that’s about it. You don’t move any slower, your footsteps aren’t silenced and your aim isn’t any better. Being 5’8” has taught me that being shorter makes it harder to see, so maybe this is simply an option that experienced Demon Massacrerers can use to give themselves an added challenge, but it’s still stupid. If you want to give yourself an added challenge it’s a lot more fun to try sitting on the keyboard and playing the game with your ass.

The readme says: V = To make it bluuet time
What it really does: I’m not sure exactly what “bluuet” time is supposed to be, but it sure as hell isn’t anything like bullet time. In bluuet time, the entire game simply slows to a crawl. That’s it. No additional bullet effects (probably because your bullets never appear on the screen in the first place) and no additional tricks you can pull off. You don’t even have a limited amount of bluuet time, you can simply keep the game in slow motion for the entire time if you feel like it. Max Payne was a good game and the bullet-time gimmick worked well in it, but now other developers are taking a good idea and driving it into the ground by slapping it in their games when it isn’t necessary and doesn’t make any sense in the context of the game. You know, like colored lighting.

The readme says: K = To make the crosshair apper
What it really does: This makes a targeting reticle appear, like a bright shining beacon guiding all your happy little bullets to their new home inside the enemy’s face. Unfortunately for you, you’re better off without it because it’s off center. Your bullets actually hit substantially lower and to the right of where the crosshair shows up. If a mistake like this (that would have taken ten seconds of playtesting to catch) isn’t a mark of supreme laziness, I don’t know what is. Now, some people have accused me of being immature and unprofessional when I harp on seemingly small mistakes like this. To be honest, I’ve always prided myself on being immature and unprofessional, so I’d like to take this opportunity to point out that all the people who made this game are fat.

The readme says: ALT = Trick shoot
What it really does: At first I thought this wasn’t a very good trick, since holding the button by itself doesn’t do anything. However, if you hold it while sidestepping your guy will tilt 45 degrees in whichever direction you’re stepping and one of your arms will detach from your body and float into the air in front of you. I must admit that’s a pretty good trick. 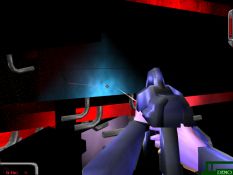 The dreaded alien paper clip monsters are after me!

This game also has literally the worst controls I have ever seen in a FPS, because while the keyboard controls are just plain old sluggish, the mouse controls are completely unpredictable. Nudging the mouse slightly to the right might not have any effect at all, or it could make you whip around 180 degrees and face the opposite direction. It’s almost impossible to keep your aim on an enemy while you’re moving around, because if you try to make a small adjustment to your aim you may end up turning sharply and running into the wall. This makes combat incredibly disorienting, even more disorienting than the time I smashed my face into the back of my friend’s Civic in the Renton Technical College parking lot.

As if that wasn’t enough, which I suppose it wasn’t, Ventelation Studios also made sure this fine demo was riddled with bugs. But instead of having a number of small bugs, they wisely decided to include a small number of severe, crippling bugs. Occasionally you will simply fall through a floor without warning, which is very surprising and unusual unless you’ve ever played Sonic Adventure DX. Walls do the same thing, occasionally giving way and letting you fall through to a whole new world of random swirling colors. Strangely, these random swirling colors are almost indistinguishable from the actual game. Also, sometimes the monsters will decide moving is no longer the “in” thing to do, and they’ll just stand there motionless, but this will make them impossible to kill. Also, when you load up a game (no matter what name you save the game under, it will look blank again when you try to load it) the majority of the time you will encounter the previously documented “sticky shoes” bug and have to restart.

This demo is not merely bad, it manages to fail spectacularly on every level, both real and imaginary. I sincerely hope the author never unleashes the full version of this atrocity on the unsuspecting world, and fortunately it doesn't look like he will, since the "official homepage" of the game is a redirect to a Geocities site that hasn't been updated in two months. If a full version ever comes out, I'll have to go out and smash my face into random cars until I forget that this horrible game ever existed.