Arthur's Quest: Battle for the Kingdom

At a Glance: Are you intrigued by the idea of stepping into King Arthur’s shiny shoes and running around a forest killing lawn gnomes and spiders?? Well, I guess that’s a bad way to start things off, since the only people to answer “yes” to that question would be Valu-Soft employees and their mothers. But on the off-chance that my brief description made you want to play the game, I urge you to take a look at the developer and publisher first. If the tag team of Valu-Soft and Valu-Soft isn’t a surefire recipe for spectacular failure, I don’t know what is.

Right when I started playing this cringe-inducing mass of what could best be described as monotony incarnate, I noticed an extremely strong atmosphere. Most budget titles don’t create any kind of “mood”, but when you play King Arthur you can’t help but notice an overwhelming atmosphere of apathy. It’s difficult to describe, but after five minutes with this thing you are left knowing, without a doubt, that nobody who worked on this game gave a shit about the project. In that respect this game is a lot like Thundra, but Arthur’s Quest has the advantage of not including any fat naked men in UFOs. 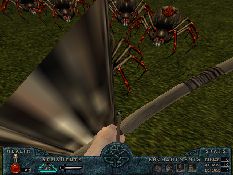 Unfortunately keeping the fat naked UFO men away seems to take up a lot of CPU power, because I could probably get a faster framerate by drawing each frame on the monitor manually with a pen. My system is able to run Battlefield 1942 and Planetside with no problems at all, so I’m very curious how the developers were able to code a game about hopping around in a narrow little forest stabbing spiders and make it run this badly. My theory is that they took each line of code and copied and pasted it 20 or 30 times just to make sure the computer got it right, which is the same approach EA took when they coded Command and Conquer: Generals.

And it’s not like the bad framerate is a price that you pay for great graphics, because the graphics in this game are an affront to all mankind and at least a few members of the animal kingdom. Firing an arrow results in a 50% chance that you’ll actually see the arrow flying through the air, and a 50% chance that it will simply disappear. Enemies routinely clip halfway through the flat green walls that I guess are supposed to look like lines of trees, and I frequently got stuck on and trapped inside random objects on the landscape. And sometimes if you crouch in the right place you’ll fall right through the map, at which point you can float through the entire map and see some wonderous sights, such as a house way out in the distance that they apparently forgot to delete after copying and pasting a few times to make the village. 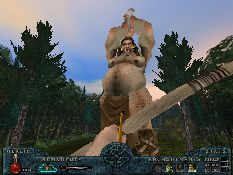 Does this look like a shot you could possibly miss? If you answered "no", you clearly aren't familiar with how shitty the game engine is.

The story in Arthur’s Quest is about as epic as the riveting “Help Tony the Tiger get through the maze” saga I experienced this morning while staring at the back of a Frosted Flakes box. You start out in....some town, somewhere. But this is a special clone town, one that’s populated by about 12 people with about 3 or 4 unique looks. You’d think they would have at least bothered to make a few more models, or at least position the people so that identical twins aren’t standing right next to each other. Anyway, the many identical twin brothers are all standing there motionless, presumably thinking about the long-living of the queen or whatever people in England think about, when four or five lawn gnomes come out of nowhere and run into the village. This causes everyone to flee in terror for about two seconds, then stop running and resume standing motionless 30 feet away from where they were before. Meanwhile a woman runs up to you (with her identical twin sister right behind her) and hands you the dreaded Plastic Sword to fight the tacky-looking little critters with.

Now, I’m no expert on lawn gnomes, at least not as much as some other writers, but I would think that if one of them came to life I would be able to kill it with a stab to the face. But these lawn gnomes take at least five or six stabs each to kill, and since they swarm in groups of seven or eight while making obnoxious grunting noises, you’ll be able to play for about ten minutes before the noises drive you insane and you take a cattle prod to your sound card. Once you fight them all off, they give you an equally useless bow and tell you to go find Merlin. After a very long, very boring trip through a forest maze, you find Merlin relaxing in a cave in the middle of nowhere. He uses some remarkably bad grammar to inform you that you need to kill Morgan LeFay, and then he makes a big deal out of giving you magic arrows for your bow. And then ten seconds later when you get dumped back into the forest, these magic arrows are just lying around on the ground. Thanks a lot, fucker.