At a glance: My jaw just shot off the bottom of my skull trailing a mixture of arterial blood and sinew, crashed through the floor, and ended up as a smoking crater in the basement of my apartment building. Why is that you ask? Because Knights of the Old Republic is a GOOD STAR WARS GAME! The last time that happened people were running for the office of president on the anti-pterodactyl platform. 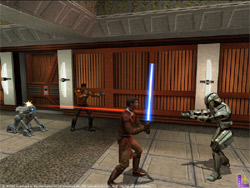 I would imagine that the quality of Knights of the Old Republic was as much of a surprise to most reviewers and gamers as it was to me. That is to say that after tarnishing a legacy of publishing only the greatest games, LucasArts has pretty much zero credibility, especially when it comes to the now wholly-maligned clutch of hideous Star Wars games they have released since about oh, 1995. Knights of the Old Republic isn't just good, it's pretty damn near amazing, and maybe the best console RPG I have ever played. Disclaimer on that statement: I did not like any of the old Final Fantasy games very much so if those are the paragon of RPGs to you then you may not agree with my opinion.

Knights of the Old Republic starts out in media res with you and fellow Republic soldier Carth escaping from a republic ship that is being attacked by the nefarious Sith. You elude the Sith's evil leader Darth Malak and flee to the urban world of Taris where the adventure begins.

First and foremost the system for the game is based on the D20 rule set used in nerd-favorite pen and paper games like Dungeons and Dragons as well as computer RPGs like Neverwinter Nights. Thankfully the game handles the majority of the stat crunching leaving you to make a character and occasionally pick skills as you advance. I appreciate being able to build your own character in a game instead of running around with a pre-packaged angst machine like in the Final Fantasy titles, but I also can certainly appreciate not making things too complex. Especially on a console. The combat is conducted in real time with impressively fluid battle animations and the ability to pause and issue commands to any or all of your three party members.

Probably the greatest strength is the cinematic feel of the conversations and dialogue in the game. BioWare has plain and simple fucking outdone itself in casting good voice actors, writing sharp and often funny dialogue, and putting together a gripping plot. Nearly every conversation is a joy to participate in, with the dialogue (always voice acted) branching appropriately depending on whether you are choosing to follow the path of the light side or the dark side. 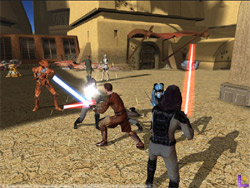 Good old Tatooine. Despite what the game leads you to believe Tatooine never changes!

Once you have stolen a spacecraft on Taris the game opens up wide for the player, allowing you to fly to any of the planets you currently know the location of. This ability to zig back and forth between locations adds a fair bit of non-linearity to the game, even if the path you need to take from planet to planet does reveal itself in a pretty straight line. Another thing about this is that as you travel around between the planets the bad guys are portrayed as remaining active in their efforts to foil you. They don't just sit in a castle waiting for you to come and defeat their guardians and then them, they plot against you and send various assassins and bounty hunters out to kill you.

There is a down side to the game, and it may put off some players. It's impossible to deny that The Force is at best a cruddy new age philosophy and in a game with the depth of Knights of the Old Republic you know you're going to be exploring that philosophy a lot. Unfortunately, the best way to become a "good" Light Side Jedi is to behave exactly like a stereotypical ultra liberal would. If you want to go to the Dark Side then behave like a stereotypical ultra conservative. Basically every time you find an encounter that will earn you light or dark points it's going to be a "help the poor" or "defend the alien from the racist human" type of situation. There are rare but welcome times where it will mean letting the bad guy live instead of hacking his face off, but these are definitely not representative of the "moral dilemmas" the game throws at you.

The other thing, and it somewhat ties into the conservative/liberal problem the game has, is the Czerka Corporation. In the game Czerka is a galaxy-spanning super corporation with shady business practices that include genocide against the Sand People and slave trading with Wookiees. They are about as faceless and evil as an evil faceless corporation can get and in addition to being a very "big business is bad" sort of message Czerka is also just plain fucking clichéd. Luckily they are not THE bad guys they are just SOME bad guys.