At a Glance: One of the most common personalities you will find on the internet is the Teenage American Japanese Wannabe, an online demographic that ranks slightly below furries and console fanboys on the annoyingness scale. TAJWs, also known as Japanophiles (or “fags” in more educated circles) do not simply enjoy anime, they are obsessed and consumed by it. They put phrases like “ne?” at the end of their sentences, they talk with their eyes closed in order to look cool, and they masturbate to pictures of cartoon women with eyes the size of bowling balls and hair the color of a urinal cake. But most importantly, they think any product that comes from Japan, or at least has a Japanese feel to it, is worthy of worship and should be extolled in long, rambling GameFAQs forum posts with an average of two “^_^” smileys per sentence. ”Got Game” apparently noticed this group’s existence, and therefore tried to make everything in the game as Japanese as possible so they could at least get a few dozen sales by exploiting gullible teenagers. Smart move.

“Various characters integrated in the story that can change your destiny!”

“Opening musical overture of over 2 minutes!” 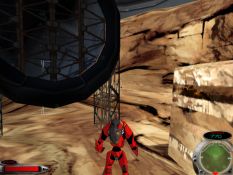 Nope, my robot isn't floating in a lake of caramel, that's supposed to be a wall.

Are you excited? After reading those wonderful quotes from the box, I know I sure was! It’s been a long time since I’ve had my destiny changed by a game, let alone a game that boasts a two-minute opening number and eight whole “sets!” And after firing the game up I saw that the box did not lie, because the opening song does indeed clock in at 2:09. Unfortunately, the “musical overture” is some generic Japanese pop song that drones in the background while big robots fly around and do random things (for OVER TWO MINUTES!!). And on a note that reflects poorly on either my hearing or the band’s lyricism, the chorus sounds exactly like a girl chanting “We’ll keep farting in sunshine.”

Scatological references aside, the plot in Tsunami 2265 should be immediately familiar to anyone who has heard of either anime or Japan. For example, the box says “Tsunami 2265: 1st Century After – A WAVE OF PURE ADRENALINE.” You can immediately guess that the civilized world has been destroyed in some kind of disaster (perhaps a tsunami of some sort) and that all over Japan different factions of a new Earth government are fighting it out against each other. Then when you learn that the main characters are a man and a woman who don’t seem to know each other, you can guess that the man will have spiky hair and a shady background, and the woman will be a strong warrior who had to fight extra hard to win respect because of her gender. And then at some point one of them will save the other’s life and they will fall in love. I wrote this paragraph after simply looking at the box - before even installing the game - and now that I’ve played it I can say that almost all of these guesses turned out to be correct. That’s kind of sad. 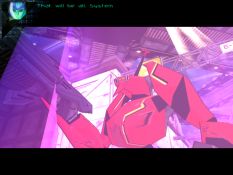 I don't know why the training stage has bright pink lighting.

The cel-shaded graphics in this game actually manage to rival Wild Arms 3 in sheer ugliness. Now, cel-shading usually looks pretty bad (although occasionally you’ll get a game like Legend of Zelda: The Wind Waker or Sly Cooper that does it right) but Tsunami 2265’s graphics are absolutely hideous. All the people look like plastic figurines who were tragically shot repeatedly in a drive-by paintball gun attack, leaving them covered in glaring bright colors that appear in ugly splotches all over their clothes. Every movable object or person is framed by an inch-thick black line, making sure they always sharply contrast with the smeary, low-res textures pasted onto the lumpy, misshapen blobs of random polygons that comprise the background. If the developers of Jet Grind Radio ever see this game, they will undoubtedly begin mutilating themselves with various power tools out of sheer remorse for having started the cel-shading fad that led to the creation of this monstrosity.

Sounds pretty bad, huh? Just wait until you try to play it.