The incredibly generic plot of Revolution is made interesting only by the cutscenes, in which the few speaking NPCs recite lines of badly translated dialogue while flailing their arms and heads around like mannequins stuck in a wind tunnel. The main character and champion flailer is Jack Plummer, who shows up for a job interview with a giant corporation called “The Corporation.” Aside from picking a really unimaginitive name, the owner of The Corporation really sucks at picking a location, since his company’s headquarters is located in the middle of an abandoned floating city surrounded by a massive brown cloud. After Jack flies in on a hover car, and somehow manages to get out and appear on the ground while the car is still descending, he walks up and tells the guard that he’s there for a job interview, and the guard demonstrates his poise and cunning by responding “Yeah…so?” Jack’s response, “So…here I am”, seems to satisfy the guard, who tells him “Walk around while I check your ID” and then turns around and runs away before Jack can explain that he never gave him any ID. 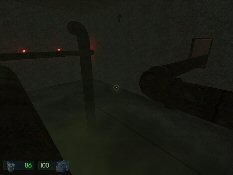 The usual daily commute for a worker at The Corporation.Jack responds by standing still on the front steps for several seconds while turning his head back and forth as if slapped by the sheer stupidity of the adventure he’s about to embark on. After the camera completes a slow 360-degree turn, allowing you to clearly see the background lights right through Jack’s head, you get to enter the building, wander around a few dozen hallways, stroll into a bar, meet some girl named Juana and trigger the cutscene that turns Jack’s world upside down.

You: Juana! I can’t believe. What are you doing here.
Juana: Im in the launch break.
You: Oh. You are working here?!
Juana: Yes. I work in the Higher level of The Corporation.
You: Higher Level?! Whats that supposed to mean
Juana: Well I cant tell you. its confidential.
Juana: Lets say that if you will not working here, you wouldnt be here?
You: Oh yeah! Good answer. If I will not know you, Id say you are right.

The exact meaning of this conversation remains a mystery, especially since most of the spoken dialog is nowhere close to the text on screen. Come to think of it, none of the spoken dialogue in this game matches the text on screen, and most of the muffled, grainy audio bytes sound like a guy delivered them over a broken walkie-talkie with his head stuffed in a pillowcase. But that’s okay, because after you leave the bar area, you won’t see another human being for the next few hours. 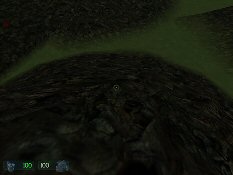 Thanks to the art team's stellar texture work, you too can know what it's like to run around on a pile of dead sardines.In order to get to your maintenance job (apparently you’re now an employee even though all you did was walk in and hit on a girl in the bar) you need to make your way across eleven thousand feet of pipe, because hey, what kind of Half-Life ripoff would this be without a few dozen hours of pointless jumping? Unfortunately they forgot to make the jumping puzzles fun or logical in any way, so you’ll have a great time touching giant electrified fences in the bottom of a sewer and trying to avoid a two-foot-deep puddle of water that somehow knocks off half your health when you touch it. One thing you won’t have to worry about is long drops, since even a fall down a huge elevator shaft, which takes over ten seconds of freefall, only does about 40 damage. But if a pipe is near any of the mysterious fog that shows up in random locations, be sure not to fall off, since touching the fog will make you splatter into a mess of blood and meatballs.

Eventually, in a completely unexpected plot twist, it is revealed that The Corporation is a giant evil corporate entity responsible for trading away large amounts of blood in exchange for oil. Eager to take a break from shooting rats and doing some of the other stupid jobs of a maintenance worker (which the game doesn’t just tell you about, but makes you actually do) Jack gets selected for a biological weapons experiment and gets turned into a “Breed”, which makes him look like the Predator after he put on a Spawn mask and fell in a vat of blue paint. He meets the leader of an underground resistance movement called, uh, The Resistance. When he asks the leader what happened to Juana, the leader replies “We aren’t be able to contact Juana for couple of weeks,” which convinces Jack to join the resistance against whatever it is The Corporation is doing. I’m not even sure how the story ended, since none of the stuff leading up to the final battle makes any sense and the ending just shows you getting in a hovercar and flying off into the giant cloud of vaporized shit.