I hate 99 percent of music, but within the heavier genres there's a slight uptick: I despise only about 97 percent. The Mayhem Fest, an all-day barrage of mostly laughable "extreme music" acts, would definitely test my mettle. 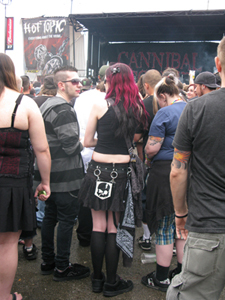 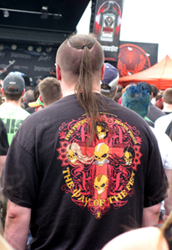 For a fan of any heavy music, attending touring metal festivals means confronting some uncomfortable truths, such as acknowledging that the mutants surrounding you share common aesthetic ground and thus are now your peers in a very real way. Metal crowds look inbred, not only because everyone appears related, but also because everyone seems seriously defective. If you find yourself in this situation, it's delusional to suggest you're the only normal one.

Fortunately, I can just keep repeating the mantra "hey, I'm only doing this for work."

Mayhem Fest does not involve the band Mayhem, whose storied history includes brain-fragment necklaces, murder, stake-impaled sheep heads, Norwegian forests, and some pretty fucking compelling music. All of these elements were in short supply during this life-sucking shit-fest, held in the ominous shadow of the Agricultural Hall of Fame.

Like most modern festivals, Mayhem operates with brutal efficiency. Bands play on makeshift side-by-side stages, so one begins its set the second the other group ends. If all the featured acts were good, it would render spectators conflicted about when they could leave to brave the public restroom or the slightly more appetizing concession stand. At Mayhem, the more likely scenario was that I would resort to locking myself inside a distant portable toilet, weathering the putrid fumes in grateful exchange for a brief muffled respite from the relentless crap bombardment.

I saved my bathroom break for Bullet for my Valentine, who I'll leave out of this article because they're just an emo band with long hair and breakdown riffs, an unsheared sheep in wolves' clothing. I'll also dismiss the headlining acts. For one thing, Marilyn Manson parodies himself so effectively that he transcends mockery at this point. He can be an involuntary tangential player in interesting scenarios, such as when a middle-school kid with a gun orders his teacher to say "Hail Marilyn Manson" and she refuses, but he's too willfully ridiculous to serve as a primary punchline.

A lot of groups blended together in an incoherent blur of frog-belch vocals and speed-scribbled guitars, so I've narrowed the coverage to the most egregious offenders -- and one highlight. First, let's trudge through the duds.

Sample quote: "This is a metal show, not a tampon convention!" 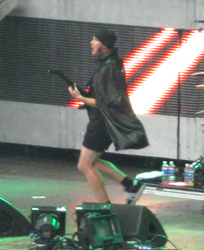 I couldn't find any online evidence that tampon conventions actually exist, only a bunch of moronic similes ("sounds like this guy has more strings attached than a tampon convention!") But if I had a choice between attending this apocryphal event and watching another Killswitch Engage performance, I'd opt for TampCon every fucking time. I could browse vendor booths in a dingy hotel ballroom, learning about innovations in gentle-glide and flexible-wing technology. I could hear creative pitches from salesmen motivated to convince me I need feminine hygiene products for some reason. Most importantly, Killswitch Engage's generic mall metal would not be playing in the background.

Killswitch Engage shows and 'PonCons are mutually exclusive propositions. As soon as dickhead guitarist Adam Dutkiewicz commandeered the microphone to yell "fuck you, bitch" at some woman who refused to raise her shirt, the band would be mauled by a rabid menstruating mob. Surveying the carnage, an observer might remark "I haven't seen so much blood since the tampon convention! Ha ha! Oh, right. Is that thing still going on?"

Not content to repulse people solely with its horrible songs, Killswitch Engage pours on the charm. "It's not Kansas City, it's Kansas Titty," proclaimed Dutkiewicz. "Tits out!" Breast puns dominated the banter for the rest of the set. "Let's start a circle pit, or should I say circle tit," Jones said. "So round and succulent." Then he trailed off, mumbling incoherently until the rest of the band mercifully drowned out his groupie fantasies with some weak pseudo-thrash.

Killswitch Engage closed by butchering "Holy Diver." Some random drunk got pummeled in a Wisconsin karaoke bar for fucking with that song, and rightly so, but where are the vigilantes when these assholes desecrate it with chug riffs and crude grunts in front of thousands of witnesses? And where's sword-swinging Dio when he's needed?