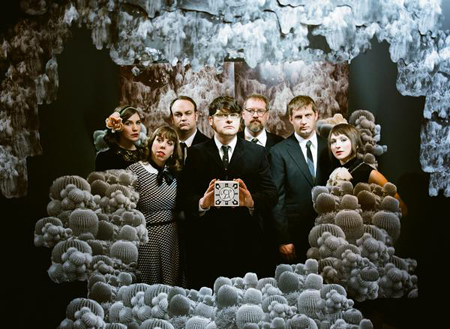 Track 4: "Won't Want for Love (Margaret in the Taiga)"

Yes, that's "mistle thrush," coming so soon after the "whistles/thistles" debacle. And a few tracks later, Margaret sings "And thistledown that we had found to lay upon the dewy ground." The album's real concept appears to be incorporating the aesthetically unpleasant sound "-istle" as frequently as possible.

Meloy filters his creaky whine through an earnest, aristocratic brogue that's not so much "fake British" as it is "unplaceable and antiquated," some sort of quirky create-your-own-accent from a fictional role-play realm. But what annoys about his delivery isn't so much the dialect as it is the abrasive nasality. If Meloy were an animated character, he'd be a slithering, sick-mucous-green pile of slime, like some anthropomorphic sinus infection from a kids-health video in which the ailments sound as though they're suffering from what they represent.

Track 8: "The Wanting Comes in Waves/Repaid"

Shara Worden plays the "Forest Queen," the album's most inexplicable creation. The Forest Queen grows creepily jealous of her adopted son William's tryst with Margaret, but she allows him to spend a night with her, as long as he forfeits his life immediately afterward. So, she's overprotective, except when she agrees to let the kid die, which seems underprotective at best.

Worden's symbiotic relationship with The Decemberists makes a lot more sense. She gets musical backdrops marginally more interesting than her own snoozy creations under the My Brightest Diamond moniker, and The Decemberists finally get to add someone with an attractiveness quotient above 2 out of 10 to their extended family.

Decemberists fans have been congratulating themselves on retroactively spotting this song's bold-faced foreshadowing: A man who has killed his three children remorselessly boasts "I expect that you think that I should be haunted." Then, a few songs later, he is haunted -- by those very kids he killed! Who could have seen that coming? Also, during the track 16 reprise of "The Wanting Comes in Waves," William sings "here come the waves," meaning not only the metaphorical waves of passion, but also the actual waves that will lead to his drowning death. Amazing!

The Decemberists cover "Wanted Dead or Alive." It's all the same, only the words have changed. (For the worse -- "limber limbs akimbo.") Meloy proves he can swipe ideas from sources other than obscure British corpses.

This country ballad might be the record's most boring song, but I'll address it because it's the anticlimactic finale. William and Margaret reunite, hastily marry, then willfully drown immediately afterward. Their insistence on ceremony at a time of impending mortality doesn't seem especially efficient, but, whatever, they're dead.

And that's it -- everybody dies at the end, except the Forest Queen, and, I guess, The Rake's already-dead kids. On the plus side, there's little chance of an even shoddier Operation: MIndcrime II-style sequel a decade down the line.