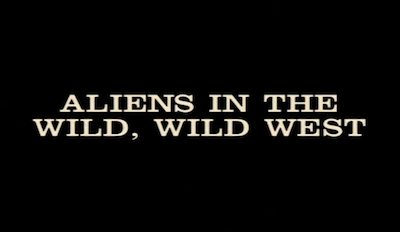 Overview: An annoying kid and his massive whore of a sister travel back in time to the Old West, where they have to save some furry alien monstrosities from being sold to a traveling sideshow. They succeed and then have a horrible dance party. Afterwards, five people who call themselves Executive Producers all watch the movie and agree that it is a fine product which should be released to the public, a decision which is now one of history's greatest puzzles.

The Case For: Watching this puts us one step closer to finally checking the entire Canarom Productions catalog off of our list forever. Note that this is only a case for us, there's no reason anyone else should ever watch Aliens in the Wild, Wild West.

The Case Against: Unlike fellow Canarom trainwreck Shapeshifter, which at least has the decency to lull you to sleep by being relatively innocuous for the first half-hour, Aliens in the Wild, Wild West is just wall-to-wall Romanian Skullfuck Surprise from minute one. 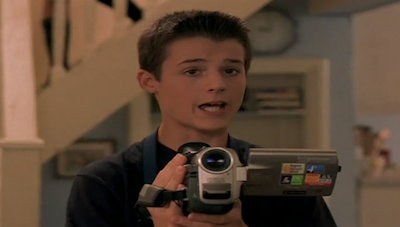 Hey, remember a little movie called Shapeshifter? You know, the one about the teenage Romanian secret agent - whose parents are both also (recently retired) secret agents - taking a vacation to hell to play glass harmonica with the most insane CGI griffin thing imaginable for extremely unclear reasons? Yeah...this is another one of theirs. That's right - the one and only Canarom Productions. There aren't even words in English to describe the kinds of mind-nuking Eastern bloc granola these guys must've been smoking when they made...well, everything they ever made, really.

So naturally, we're completely torn about how to even begin describing Aliens in the Wild, Wild West. On the one hand, there are the titular Aliens, who both look and sound (oh God, the sound) like the bastard love children of Nukie and Galgameth, i.e. the products of a reproductive abomination so unspeakable that even imagining the act is guaranteed to permanently destroy all of your higher brain functions. On the other hand, focusing too much too quickly on those Busey-eyed, Gremlin-abortion-looking motherfuckers would mean somehow ignoring the main character, an equally baffling time-traveling Canadia-Romanian tweenage sarcastic turdlet who is constantly, exasperatingly performing his one-man traveling YMCA At Risk Youth Open Mic Night talent show: Back to the Future Again: The Final Jeopardy "Phone a Friend" - Hey Remember That Show Captain N Guys? - Inappropriate Pop Culture Anachronism Festival (sponsored by Boost Mobile).

Grizzled veterans of this review column will have some scarred brain tissue left over from our other brushes with Canarom classics like the aforementioned glass harmonica dwarf-hell foreigner orgy Shapeshifter and the magically unmagical Teen Sorcery. For those of you who didn't already know, we're on a mission from God to get through their whole filmography eventually (which hit an impressive 6 movies in one year, before anyone finally started watching enough of what they were making to stop giving them money). We're also about 90% sure that these movies have somehow come to us from an alternate Philip K. Dickian universe where Canada and Romania are at war over the United States, and joined forces to make a crippling psychological weapon to destroy our nation's youth through the mystical power of propaganda. Or maybe the production crew were all Canadians who don't speak Romanian and vice-versa, except that no amount of language barrier can explain any part of this:

"This is a rich slice of American history," to quote from the heady dialogue of Aliens in the Wild, Wild West (yes, that's an actual line in the movie). Rich indeed, and nothing is richer or more historical than those delightful bug-eyed, psyche-raping little horror Sasquatches who look like something that Galgameth would see in his screaming nightmares and sound like Meatwad trying to do an impersonation of Jar Jar Binks sucking down enough whip-its to kill off half the ADA. The plot, such as it is, revolves mainly around the weird, gross Mama J. Jar being kidnapped by the evil sheriff of Prefabsville Pines, Missouruh, and sold off to a circus sideshow, presumably P.T. Barnum's darker and lesser-known side project, Barnum's Limited Liability Technically Legal Traveling Abominaseum and All-Purpose Snuff Dungeon. Because, you know, nothing fills a tent quicker than intergalactic hate crimes and irregular third world Furby knockoffs whispering "k i l l . . . m e . . ." to anyone insane enough to move within listening distance of their blood- and feces-smeared cages.