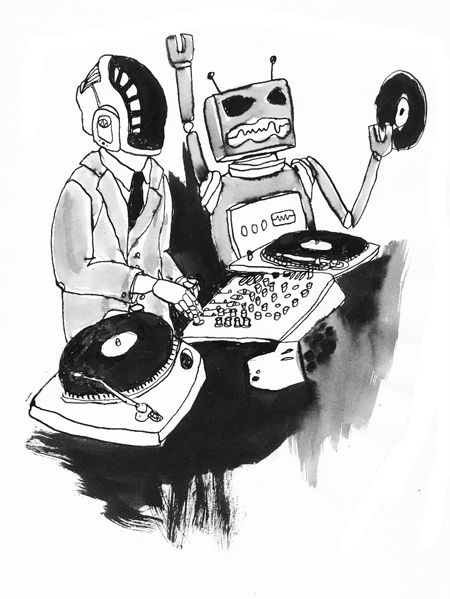 Disco had an impact beyond the short period where every rock band was trying to ape the style (it's pretty weird that a song that hit #1 with a great bassline - Chic's "Good Times" - never gets radio play, but "Another One Bites The Dust" is on the air every thirty seconds because of that same bassline). Every form of dance music since then has just involved different artists doing their take on it, from hip-hop DJs spinning disco and funk breaks to house producers ... okay, house producers are just making disco, that should be pretty obvious. Unfortunately, someone decided that these people can be successful only if they dress up as robots.

One major point of inaccessibility for the genre is its method of presentation. Lots of people eager to hear certain genres of electronic music will naively ask which albums to get to hear more of something they liked. Well, they are told, they don't really do albums. It's a singles genre. So ... what compilations of singles, then? Well, there are some, but most of them are mostly shit, so you should listen to mixes instead. But the mixes you can buy are mostly awful. Oh, and most songs aren't actually good all the way through, just ... certain parts. Instead, it's recommended to download some mp3s made by some guy at a blog that got taken down three years ago.

As much as dance-music enthusiasts will try to find ways around it, it's just tougher to get into than almost anything else, disco especially. You can't even count on a certain artist maintaining anywhere near the same level of quality over a couple years; you have to get super-nerdy and check the producer and remixer credit in tiny, tiny text on the twelve-inch single. Did I mention it's almost all on twelve-inch singles? Yeesh. To collect or even listen to it "as it was intended," it would require a room in your house. Hope you're not living with anyone, because you'd get kicked out halfway through saying "collection of disco records."

There is hope, though, for any rockists looking to repent! In recent years, a revival of interest in disco has sparked many excellent series of compilations, and multitudes of blogs of various legalities. The best point of entry for anyone from an indie-rock background is the Fabriclive 36 mix made by James Murphy and Pat Mahoney of LCD Soundsystem; it's an excellent summary of the sort of music made when disco overlapped with a bit of a weirder vibe in the early '80s. It has some overlap with the Mutant Disco release, a compilation of many wonderfully strange tunes released by Ze records. Disco Not Disco has similar content, but swinging even farther toward "post-punk with a disco vibe" rather than just being disco. Salsoul has released an awful lot of compilations, of which Disco Funk Flavas has the worst name but probably the best content. The Disco Demands series, currently five volumes, has a fantastic collection of incredibly deep cuts by artists I'd never heard of previously.

As far as blogs, Beat Electric mostly leans toward early-'80s boogie and more electronically produced disco. American Athlete, a DJ's blog that has a good mix of original disco, disco-flavored Latin and African records, and recent edits, is the other one I check on a semi-regular basis.

Hopefully this little diatribe has convinced you to feel guilty about the music you listen to, so much so that you're willing to try something new. If you decide to completely swear off all guitar-based music as a result, please mail me all your T. Rex records. And check back in a few years, when I will be releasing an extended edit of this article by copying-and-pasting the part with the fewest words over and over.

Thanks to Ali "Donna Summoner" Horn for the hot-stuff illustrations!