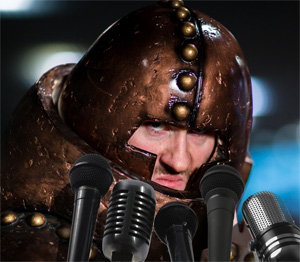 I come before you today to say that words matter, words can hurt, but words change over time.

It has come to my attention that certain media outlets and bloggers with an agenda to create controversy have recently dredged up a video containing some offhand comments I made many years ago. These past words and actions have been perceived by some as hurtful, even hateful, and a number of you have made up your mind that I am a misogynist. No one is more upset about this than me. When I first learned that my words were construed as offensive by some of you I was shocked.

I will admit, I had not chosen those words very carefully, as I was in the process of smashing through a wall and deflecting bullets. However, I would like to correct that now and, hopefully, make clear to you that my intent was not to offend. It is my hope that we can all use this incident to open up a dialogue about the use of gendered insults, for women and men, so that future misunderstandings such as this can be avoided.

As a feminist ally and the Juggernaut, I am very aware of the effect gendered insults can have when used during personal interactions. There are certain words that should be and are completely off limits in a healthy conversation. But I must acknowledge my wrongdoing wherever I might have done wrong.

During a heated conversation with Professor Charles Xavier and Lilandra Neramani I might have used a particular word that some women find offensive. If any of my language during this conversation was deemed to be insulting to women I offer my total and complete apology as is appropriate. Some of you have construed other things I said to be overt references to forced sexual intercourse.

The idea that I, the Juggernaut, would demean women in this way and even jokingly refer to sexual violence is absolutely antithetical to who I am as the Juggernaut. Blog postings and twitter comments have flooded me over the past few days, taking my words out of context and accusing me of some of the most vile behavior imaginable. I am not this character that has been built up by those of you on tumblr who think I am perpetrating a sexual attack myself. 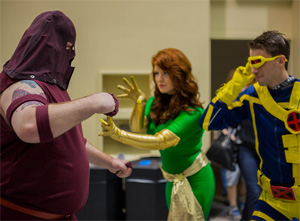 I will be the first to admit that there are occasions where tempers can be lost and that I am not a perfect man, but I try every day to better myself and those around me by being respectful towards women and men. I would never use the b-word in my personal life. I would never even use it in anger. The past is the past, and I cannot change what was said, nor your interpretation of it, but I ask you to consider the circumstances.

Did I throw a cabinet at a handicapped man? Did I slap a woman to the ground? These were actions that were undertaken by me under very extreme circumstances. I was being attacked by psionic blasts and energy blasts. This was a deadly confrontation. My way of defusing that situation was by using a little bit of humor.

Was it salty? Yes. Did it go too far? That is not for me, the Juggernaut, to judge, but I humbly ask you to consider what you might have done under the same circumstances if your helmet was knocked off, making you vulnerable to mind control.

Since I have been made aware of the concerns of some of you I have completely and totally discontinued the use of the b-word in any sort of greeting. It is my hope that my unfortunate use of language will have the net positive of effect of making sure no little girl or little boy ever has to hear the word used. The next time I break through a wall, I will be very mindful of the feelings of others.

To my family: I love you all and I am deeply sorry if the way my words have been misunderstood was harmful at all to you. I will do my best to repair the damage this has done to our family by continuing to be the devoted husband and father of two daughters that I have always been. In time, I hope the past can be forgiven, and that I can move on with my life as the Juggernaut.

I'm the Juggernaut, ladies and gentlemen.