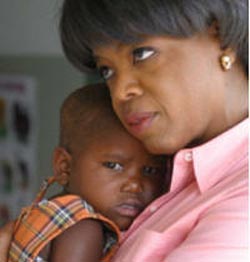 Oprah cradles a tragic story. I have never liked Oprah Winfrey. There's something about her that sets me wrong in the same way as a flowing curlicue wig on a baby or a man with no teeth seen from a distance biting into an apple. This unease I feel at the sight or sound of Miss Winfrey goes well beyond my innate distrust of her people and the crafty indolence to which her race is genetically predisposed. There is an ill-defined something at her core that is amiss.

Over the years she has transformed herself several times over. She has gone from corpulent maven of baby mama drama, to over enthusiastic motivational den mother, to her current incarnation as cooing self-righteous philanthropist. This latest and greatest Oprah, already bound for media sainthood, is the one which concerns me the most.

After having already saved the written word, Oprah announced the grand opening of her theme-park-cum-elite-academy for girls in South Africa. Located somewhere near a giant pit full of people dying of AIDS, the Oprah Winfrey Leadership Academy intends to "nurture, educate and turn gifted South African girls from impoverished backgrounds into the country's future leaders". Winfrey believes this can best be achieved by spending 40 million dollars building a sprawling state-of-the-art campus for a very small number of girls.

Many critics wondered aloud and possibly into microphones why Winfrey had chosen to spend all of her money educating girls in Africa when there are plenty of perfectly adequate girls in the United States.

"I became so frustrated with visiting inner-city schools that I just stopped going. The sense that you need to learn just isn't there," [Oprah Winfrey] says. "If you ask the kids what they want or need, they will say an iPod or some sneakers. In South Africa, they don't ask for money or toys. They ask for uniforms so they can go to school." 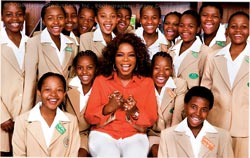 Girls excited about their new opportunity. Not pictured: 2,848 girls still living in poverty. In response to their requests for school uniforms, Oprah built a campus that includes a beauty salon, yoga studio, state-of-the-art theater, stately dorm rooms that put most American university dorms to shame, wireless internet and a giant gold statue of her with those creepy eyes that follow students wherever they go. Yes, girls who lived inside refrigerator boxes next to a pile of dirty diapers are finally able to activate their chakras and download videos of white people dancing next to moving cars. It's sort of like finding one of those Japanese guys who spent the last 60 years on an Island in the Pacific thinking World War II was still going on and then flying him immediately to California to tape an episode of Jeopardy.

Oprah received over 3,000 applications for her Leadership Academy and she accepted the 152 girls with the most tragic or heartwarming stories. They're mostly AIDS babies, maybe a few kids raised by hyenas, one with two heads and a heart of gold, some adorable puppies that survived cross-country adventures with their kitten friends, that sort of thing.

The 2,848 kids who just weren't quite feeble and heroic enough to pass muster were shown the door. No school uniform, no iPod, just a gift tote with some bath salts and a candle that smells like apple pie.

Oprah's Leadership Academy opened its doors on January 2nd of the new year. Being a Harpo Production, the Academy could not have a low-key opening. It received a full-scale media blitz, press releases by the dozen and a plush party featuring celebrities who no doubt care deeply about creating the next generation of leaders in Africa.

Local businessman Tokyo Sexwale was also present and Nelson Mandela was expected to attend although he had not yet arrived by midday. 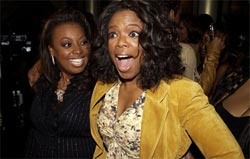 Oprah (right) and one of her broodlings prowl for prey. In addition to a businessman with the most awesome name ever in the history of all time, the party included a lavish spread of cocktails, delicacies and a cigar bar. The students who were rejected by the Academy were allowed to dig through the trashcans for crusts of bread and Tina Turner's used sanitary napkins. Some time around 9 PM Nelson Mandela shit in his pants and Oprah read a poem by Maya Angelou about a rock on fire rolling down a mountain being the black struggle.

The touchingly misguided, or misguidedly touching, saga of Oprah's misguided school for impoverished African girls reminds me most of all of a scene from one of my favorite movies.

Near the end of Steven Spielberg's cinematic thrill-ride Schindler's List there is a scene in which Oskar Schindler, a true Nazi hero, has shepherded his ragtag band of Jewish misfits all the way to an armaments factory in the middle of nowhere.

Evil Russians are coming to kill the last of the Nazis and so he has to escape in the middle of the night. The Jews - who are so grateful for his guidance that they have made a ring out of the gold elderly Jews secrete from their gums - stand around thanking Schindler and wishing him well as he and his wife prepare to flee into the night.

After saying a tearful goodbye, Schindler realizes that had he curbed his own life of excess he might have been able to save more Jewish people. He points to a car and a ring with a Swastika and cries "this is worth like 500 Jews", or something to that effect.

The Jews quiet him down and send him on his way, but the moral of the scene is clear and is one Oprah should ponder before embarking on her next epic of philanthropy: even when you do good, you can do more good if you try harder. Or something along those lines.