This is the tale of an aesthetically bankrupt fellow named Phillip, who favoured only the worst music. Nobody stopped him on the street with greetings or glad tidings, because they heard the infernal din from his headphones. No one visited his flat, at which hellish noise never ceased. Even the deaf appeared to know him, for they watched the others react to his wretched cacophony, and they signed each other "no ear at all is better than an evil ear!"

Once upon a time - on December 16, less than a fortnight until the good day of the year - Phillip found himself at a phonograph emporium. As he had no chums due to his repellent soundtrack, he shopped only for himself. He selected Fall-Out Boy, All-American Rejects and Saliva, all of whom had released new recordings on that very date, and his ears perked in misguided anticipation. 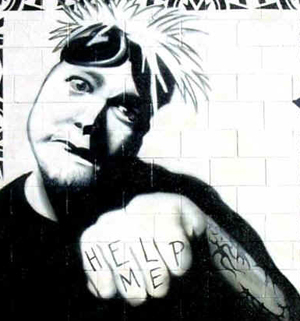 Dave Williams can't bear an eternity of "Bodies" jokes.Phillip played each of these miserable offerings to the exhaustion of their running time, but the ugly clamor continued because he'd triggered a torturous function that compelled the discs within his listening device to repeat ad infinitum. He smiled as this ungodly cycle began anew, like the rise of a poison sun, then gasped with shock as he beheld a familiar face in phantom form.

"In life, I was Dave Williams, singer of Drowning Pool," spake the apparition.

"Awesome, dude!" Phillip exclaimed. "Miss you, bro, but still love the band. So, are you partying all the time up there, man, with, like, Blind Melon and that dude from Sublime?"

"Man, the afterlife sucks for a SINNER." Dave moaned as he tucked a wayward intestine into a gaping abdominal cavity.

"But you were always a good man of music, Dave," Phillip insisted.

"Music!" Dave wailed. "I should have been thinking about all the people who begged for the noise to stop, and I don't mean just those 9/11 dudes. Anyway, man, other ghosts are coming, within the next week. They were gonna come here and smack you around, but we decided it would help mankind as a whole if they visited the groups directly and made them change their ways. Those bands you like better listen to them, or they're dead. Oh, and they can only talk to the ghosts using words from their songs, because of some fucked-up sorcery." 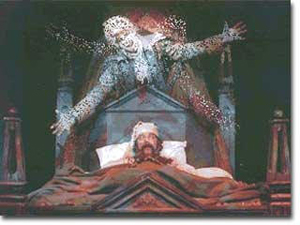 Ghost: "Hello, Josey Scott."
Josey: "I am the master of this game and everybody knows my name."
Ghost: "Yes, well, I am the ghost of Christmas past."
Josey: "Everything that you heard in the past is gone."
Ghost: "Oh, if only that were the case, vile termite."

The ghost begrudgingly revisits Saliva's hits ("Ladies and Gentlemen" and "Click Click Boom"), then fast-forwards to the first song on the band's new album, which starts with the words "ladies and gentlemen" and contains the line "hear the crowd go boom, boom." He regards Josey with dismay.

Ghost: "Fated though I am to relive transpired moments for all eternity, I still find your rehashing pathetic."
Josey: "I'm pushing forward in reverse."
Ghost: "What does that even mean? What, pray tell, is your purpose?"
Josey: "To host a motherlovin' party that never ends."
Ghost: "Did you say 'motherlovin'"? You can cuss in front of me, dimwit. I remember your song 'Fuck All Y'all.'"

The ghost solemnly screens clips of Papa Roach, Limp Bizkit, Pimpadelic, and other acts from the bowels of nü metal, then shows harrowing footage of Saliva's contributions to the despicable genre.

Josey: "I was a boy who lost his way."
Ghost: "But you're still doing it, you sniveling cunt! You rap on the new record, during 'Family Reunion.'"
Josey: "I'm just a man who makes mistakes. Sit back while I wrestle this microphone." 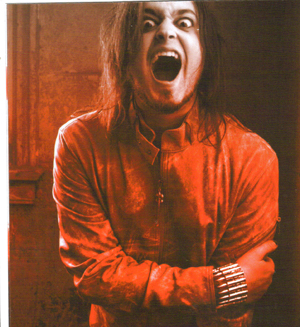 Some of the more craaaazzzy members of Saliva might prove difficult to persuade.Josey attacks the cords and equipment with WWE-caliber enthusiasm. When he's finished grappling with instruments, he pushes a button, cuing terrible Southern-fried industrial rock.

Josey: "Hell yeah! Feel the power of the beat between your thighs."
Ghost: "Bear but a touch of my hand there, and you shall be upheld in more than this!"
Josey: "I'm gonna stomp you into the ground. I'm gonna tear you limb from limb."
Ghost: "Not gay, interesting. Tell me, you silly brute, what do you think of womenfolk?"
Josey: "They can milk your cow, they can climb your tree, they're good at cookin.'"
Ghost: "Charming Southern gent. Well, I really see no hope of rehabilitation. Time grows short."

Josey: "The complicated way of life can cut you like a knife. You made me bleed. You killed my dreams. What happened to the world where love was king?"
Ghost: "Do you have anything to say regarding your crimes against music, you reprehensible swine dropping?"
Josey: "I'm a fool. My existence, abomination."
Ghost: "Your reclamation, then. Take heed! Rise! And walk with me."

The Christmas Carol Compactor continues in two days with a special Sunday installment of Garbage Day.