As our tale continues, a jolly Giant, glorious to see, appears before an All-American Reject.

Tyson Ritter: "I can't sleep."
Ghost: "Know me better, man. I am the Ghost of Christmas Present. Touch my robe!"
Tyson: "I wanna, I wanna, I wanna touch you."

The ghost hands him a recent magazine article in which he's quoted as saying "You might hate my band, but you'll fucking hum that melody when you walk away - and if you do that, I won. Even if you hate it, I won." The spirit then transports him, unseen, to a shack in Kansas City, where a man who just heard his record is bemoaning his fate.

The Rejects' 'I don't care what you think' policy clearly extends to album-insert photos.

Man: "The most memorable thing about this boy-band pop nightmare is how goddamn unmemorable it is. It's like being blindsided by a hit-and-run driver: You remember it was a painful experience, but you have no idea how it happened, no recollection of details. I couldn't hum a single hook from this album even under extreme duress, like if you held it at my head and threatened to make me listen to it again."

Ghost: "Deny it! Slander those who tell it ye!"
Tyson: "I never thought that I was so blind. I can finally see the truth."
Ghost: "In the sight of Heaven, you are more worthless and less fit to live than millions."
Tyson: "I need help. Without a change, our lives will never last. What can I do?"
Ghost: "Labour in the bowels of the earth. Are there no workhouses?"
Tyson: "I'm sorry. This could be the last mistake."
Ghost: "Life upon this globe is very brief. Hark! The time is drawing near."

Josey, Tyson and the two ghosts descend on the final subject of visitation. They come upon a ghastly figure shrouded in a deep black garment, and they also see the Ghost of Christmas Yet To Come.

The Spirit answered not, but pointed onward with his hand. He revealed magazines and computer screens, dated four years or more into the future, that looked back on a generation of peacockish musicians without being able to cite one popular act with lasting relevance and value, not a single band to be lovingly bestowed upon one's heirs. "Thank God that era has ended," quoth one critic. "Godspeed, wretched emo. Nary a representative of that movement shall be preserved for radio posterity, or emulated by tomorrow's performers."

Pete: "Happiness in misery. The only thing suicidal here is the door."

The Spirit stood among the graves, and pointed down to One.

Pete: "My dad caught me a horseshoe crab."

Still the Ghost pointed downward to the grave by which it stood. Following its finger, Pete read upon the stone of the neglected grave his own group's name, Fall-Out Boy. 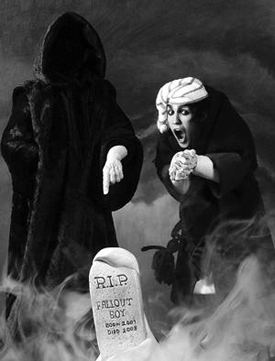 Pete: "I'd promise you anything for another shot at life."

The finger pointed from the grave to him, and back again.

Ghost of Christmas Past: "Since my friend is a specter of few words, I shall intervene with a few questions regarding your latest travesties. Of the song 'What A Catch, Donnie,' during which you have assembled vocalists from your peer outfits - Panic at the Disco, Gym-Class Heroes - and even the poor senile shell of Elvis Costello to recite lines from your earlier singles in a round format, I must ask: Who the fuck do you think you are?"

Pete: "A heat wave in your pants. Let's meet in the purgatory of my hips. My body is an orphanage, we take everybody in."

Ghost of Christmas Past: "Cease your idiotic blather, and reply to my queries! Whyfor have you conjured sounds similar to 'Spirit in the Sky' and falsetto Lenny Kravitz on this recording? How do you justify your dabbling in assorted inappropriate genres?"

Pete: "The business of soul. I'm sunshine machine. Oh baby, when they made me, they broke the mold."

Josey, losing patience: "You, you're gonna be dead and gone. Live tanks and machine guns. Next time you open your mouth up, you better be ready to back it up."

Pete: "Restrain that man! He needs his head put through a cat scan! Boycott love!"

The Spirit's finger became illuminated with a radiant, deathly glow. It started crackling with the electric currents of dark wizardry.

The Spirit issued a brilliant electric charge that reduced Pete to a glossy black smear, like eyeliner adorning the stoic face of the pavement. Immediately all his songs disappeared from the auditory play-back devices of hapless Phillip and wayward music listeners everywhere. The sundry offenses of the now-penitent Josey and Tyson likewise vanished into blissful silence. The world made rather merry, and a sickly boy became well. 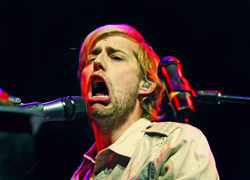