Evgeny Plushenko is the King on Ice

Evgeny Plushenko is the King on Ice, submitted by julia. For years, I've asked myself one important question. "Who is TRULY the king on ice?" Friends, I'm here to tell you, that mystery has been solved! 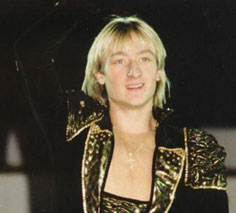 "In the first month there I saw a girl doing the Biellmann Spin , and I wanted to learn it, it was pure magic to me", Evgeny recalls. Ambitions as he is, he learnd the famous spin. At the age of seven he won his first competition. But at the age of 11 the ice rink in Volgograd was closed due financial problems. This was no reason to quit skating, coach Makoveyev realized the enormous talent and potential that the young boy has. He already could do all triple jumps at that time. He took Zhenya, the name that his friends call him too, to 1500km far away city St. Petersburg to introduce him to the famous coach Alexei Mishin who accept him immediately to his group where Alexei Yagudin and Alexei Urmanov were skating. "This was really a trying ordeal for an 11 years old. But I had him-Alexei Mishin. Because of his support, I could get over it," says Evgeny.

Wow, I think the only real question left to be answered about this guy is who the hell is he? Also, who the hell cares? Not me, he can go fucking die in a pit for all I care! Also, the frontpage requests that you please sign the guestbook. So don't be impolite, sign!