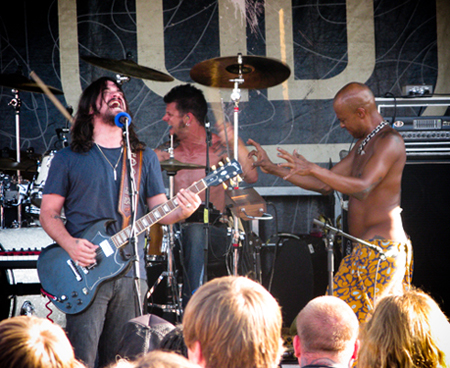 Everyone on stage is actually doing something cool. Note audience disinterest.

Shooter Jennings and his scruffy country/classic-rock cohorts offered an antidote to the rampant campiness. Warped Tour mascot Angelo Moore of Fishbone, who slummed with Katy Perry last year, made his cameo count in 2009, playing theremin and saxophone with these bad-ass beards. It must have been shocking for bystanders to see people who were actually good at playing their instruments, but they were headed for the ultimate comedown, worse than when Shooter's outlaw dad Waylon kicked his cocaine habit cold turkey. Because the band that followed this impressive display of instrumental proficiency to the stage was the fucking Millionaires. 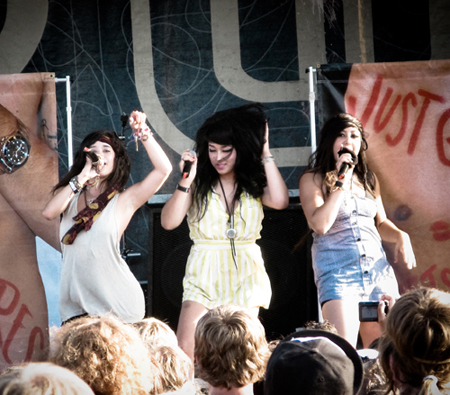 This was probably a disastrous attempt at synchronized choreography.

People really hated the Millionaires. I found this profoundly reassuring. Security guards heckled them, then started petitioning the sound guy to cut them off. The sound guy just sagged in defeat while struggling valiantly to salvage a group that remained abrasively off-key despite using Auto-Tune and backing tracks. The crowd was relatively small, and people didn't dance or cheer so much as they glanced at each other with bemusement and embarrassment. This seemed like Warped's smartest rejection of an invading virus since the pop-punk masses repelled Twiztid.

You can't berate purposely bad comedians like the MIllionaires by yelling "you suck," because they know that. That's their shtick. And you can't scream "I know that you suck intentionally, but you're not doing so in a way that's entertaining," because hecklers need to be more concise. So people just threw shit at the Millionaires, thus avoiding the whole semantic morass. Spectators started moving and shouting during the set-closing "hit" "Alcohol," but that was only because the girls threw themselves into the crowd, and the "I can touch one of those girls from the Internet" temptation overrode the prevailing disdain for this disastrous karaoke act. 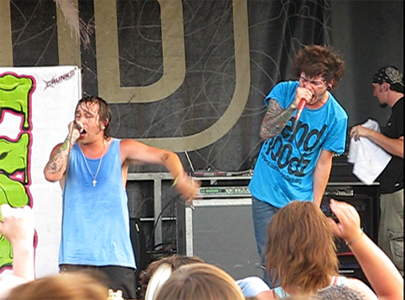 "We're faggots and we suck." Seriously, they actually said this.

Depressingly, Brokencyde commanded an enormous crowd. Like Millionaires, the group's stage show involved nothing but microphones, into which they alternately screamed and sung with equal incompetence. Brokencyde might have overtaken Insane Clown Posse as music's most derided band in 2009, and they're using many of the same tactics ICP used to become a successful them-against-us cult. For example, they had the crowd chant "fuck Brokencyde" in order to make people's justifiable hatred for them seem like part of their own master plan.

The most surprising thing about Brokencyde's performance involved the group's most obscure member, not the scene-looking guy who howls or the twerpy singer who bails on the high notes live, but the designated growler. Anyway, he was old as fuck, and he staggered around the stage like he was addled with senility. He looked like 40-year-old Napalm Death singer Barney Greenway, only older and a lot worse at screaming.

When a festival becomes saturated with bands like Brokencyde, acts that not only realize that they're a travesty but also actively court negative responses, it becomes the critic's calling to go elsewhere, to find and confront musicians that remain blissfully unaware of their shortcomings. Goodbye forever, Warped. Goodbye forever, Brokencyde.