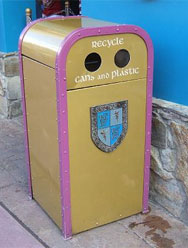 The Disney World trash cans are slightly less unhealthy than their refrigerators.At some point in their lives, all men must visit Disney World. Perhaps your family drags you along, unaware the only men who truly enjoy Mickey Mouse are the same ones who wash their hands several thousand times an hour while counting every single window pane in the room. Maybe you end up marrying the "scary girl" from high school who attempts to fill an emotional void in her heart by scattering countless, soulless, horrifying ceramic Disney figurines throughout her entire home. Feel free to keep blowing endless paychecks on plastic Goofy statues until you finally discover the one able to travel back in time and prevent Uncle Dave from molesting you in the treehouse, weirdo.

The most common cause of Male Disney Rape (forcing a male to visit Disney World against their will) inherently lies in the filthy souls of children. Working under the guise of an animation business, Walt Disney spent his life researching a method of triggering addictive behavior through exposure to film. Completely lacking any substance or content, the sole purpose of Disney's animations was to covertly hypnotize viewers, convincing them to buy stupid hats.

It is impossible to argue this claim; try watching some early Disney cartoons and try to suggest he became a cultural sensation due to the groundbreaking content his cartoons contained. You know, ones like "Mickey Mouse reads a newspaper" or "Mickey Mouse spends seven goddamn minutes trying to paint a stupid wall" or "Mickey Mouse beats up a hippopotamus who mysteriously resembles a highly racist black woman caricature." Half his cartoons were about animals walking around for no reason, and the other half revolved around some creature losing their pants, despite the fact they should not have been wearing pants in the first place.

Barack Obama is stealing all our white American princesses! This has been a friendly message from the Clinton campaign.Years of research led Disney to realize his Videodrome-esque sensations generate the optimal response when embedded inside images resembling princess dresses. Young girls seem most susceptible to this treachery, at least judging by our two-year old daughter Lauren, currently unable to spend more than nine seconds without talking about "the princess" or "the mermaid" or "the mermaid princess," whatever the hell that is. If terrorists were smart, they'd start using those keywords as code for "blow up the Statue or Liberty" or "hide tweezers in your pants pockets while attempting to board a plane" or something equally insidious. The Department of Homeland Security would be thrown into an overloaded tumbler of chaos within seconds.

Today's guide will focus on what fellow men can expect from their eventual trip down Mickey Mouse Lane, hopefully allowing you readers the chance to avoid the common mistakes I made, such as the choice to be forcefully ejected from my mother's womb 31 years ago. Actually that's not so much a common mistake, so you can scratch "having my mother give birth to you" off your list of worries. I'm glad I got that out of the way.