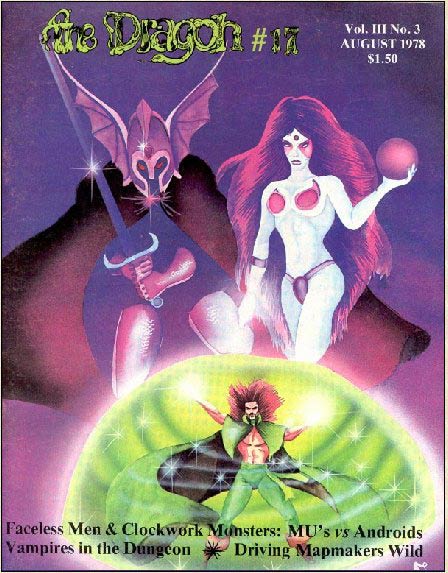 Issue #17 is a milestone for Dragon. It is the first magazine cover where they totally put a hot as hell babe in your face right up front. They toyed with some sweet babes earlier, but this one is just POW right out there. She is so hot and self-actualized that she doesn't even need a bra or anything, she just put some little evil-looking hatches on her boobs. And look at that magnificent hair. Bat wing helmet dude with the red eyes is pretty sweet too, but his cape is totally trumped by the wizard Green Lantern's cape. They've got him trapped in some sort of Jello mold and it looks like the giant babe is going to drop a cannonball on him. But he's not giving up either. You can real feel the power and the raw sensuality just oozing off of this one. 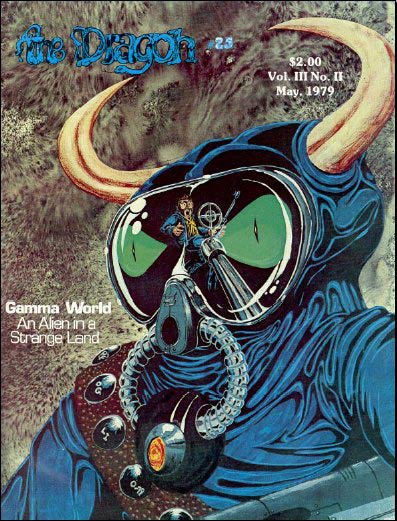 Whoa man, Dragon leaps into the realm of science fiction with this sweet Gamma World cover. The alien dude is wearing like this full-face pair of goggles and you can see his big eyes, but you can also see the reflection of the human he is about to vaporize. Ha ha, you picked the wrong bull-horned xenoid to mess with today, son! The sweetness of this one is really in the incredible detail in the alien's blue suit. You can just picture him looking for something in his closet when he goes out to blast humans and then he can't find anything clean so he has to wear his wrinkled up killsuit from the last night's orgy of blasterization. Still lookin' pretty fly though. 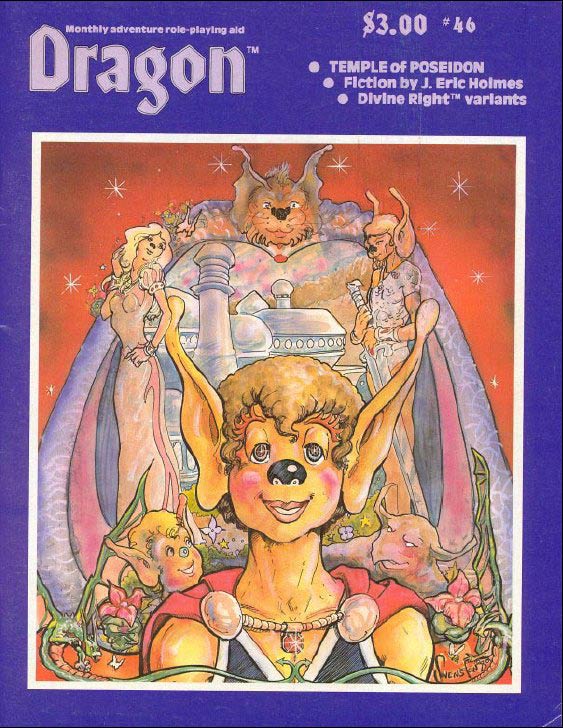 Hold on there, I know how you're reacting to this one. You're like "that is totally gay as heck, no offense to gay dudes", but this one is just as sweet as all of the other ones if you look at it with an open mind. You've got a bat-eared dude who looks like he's getting a BJ off the bottom of the cover, you've got some dragons, another bat-eared dude, some bat-eared babe with a sword, a birdy dude, a fine as heck babe, I mean I could go on, there is just such amazing detail. Sometimes stuff can be whimsical, you don't always have to "front" all the time and be all "hard" you can just enjoy some magical imagery to transport you to another realm. Like this sweet ass cover here.