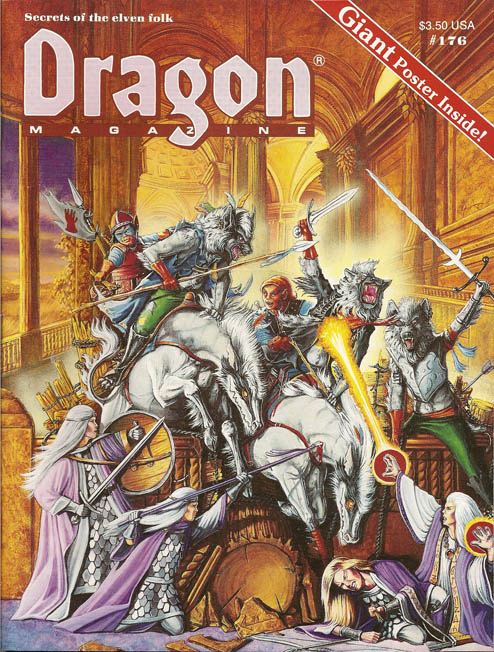 Remember what I said a while back about dudes with long white hair? These dudes have seen all kinds of crap, including wolfmen and Asian midgets riding horse monsters that don't even stop if you stab them right in the neck with a spear. This captures the energy of a frenzied attack from the wolfman/tiny Asian alliance and the desperate last stand of the Dudes Who Have Seen Some Crap in purple. The use of autumn colors clearly suggests the end of the reign of the crap-seers. A late 1980s metaphor for the Japanese buying up America? I can believe they would ally with wolfmen, no offense to our Japanese readers.

It seems sad to end this feature only barely half-way through the catalog of Dragon magazine covers. Believe me when I say that the covers only got sweeter pretty much every issue unless Phil Foglio was doing the cover which made it 10000000 times sweeter. If you don't know who he is check him out he is hilarious and draws mega-hot babes all the time. Which is pretty much how Dragon ended: with a noble series of super hot babe covers. It was an honorable way for this proud institution of gaming to end its life. May it some day return with even hotter babes and more intense fantasy action.