How to Win at Starcraft 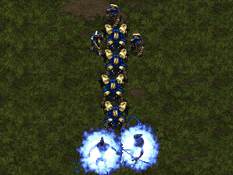 There are certain race imbalances in Starcraft, use these to your advantage. For example, Terrans can use the combo of Marines and Tanks especially well against a Zerg, a Zerg can use Zerglings against another Zergs' Hydras, and a Protoss will kill anyone regardless of race or strategy.

If you join a 2v2 game and you see your partner's record is something like 1-1-0, he sucks and you should immediately leave. Don't even consider the possibility that he has a new account. The record is the best way to determine how good a player is, and that guy must be a newbie. The best way to build up your record is to play "7V1 COMP BGH RUSH RUSH RUSH!!!" That way, everyone will think you're good and will want to be your partner. Also, if the leader of the game strays from the standard "tvb" rule, he must be cheating or have some shred of intelligence, so it's best to leave.

When deciding on an account name, make sure to make it sound intimidating. Good examples are "Cloud4357," "Sephiroth8912," "DeathAngelofDeath," "AngelDeathDeathof," and "KathyLeeGifford." Bad examples are "MyMomWipesMyAss4Me," "EatABagofHell," and "Hakan."

If you are currently in a game and everything is not going EXACTLY how you want it, feel free to leave, especially if you have a partner. If one attack fails, that's a good indicator that everything will come crashing down, you don't stand any chance of winning, and the other players will come to your house and rape your mother.

If you decide to try a use map settings map, only join those titled "TEMPLAR MADNESS V.4234!!!!" or something similar. Any map that took comprehension above the level of a partially aborted fetus to make must be too complicated and intense to understand, so don't even try to play it. Madness maps are the best because sending large waves of units, that takes no skill in making, to attack even more large waves of enemies really show who the better player is. 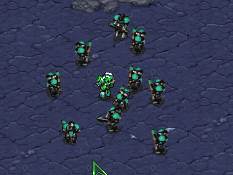 A scene from "Wartime Gang Bang." or "Awwww yeah"- that ain't the stim talking.

If you challenge someone to a 1v1 game in a channel and they decline, they must have a really small penis or man-breasts. Try to make fun of them and get other people in the other channel on your side. If you can convince the other people in the channel how cool you are and how wussy the other guy is, your life will have meaning and everyone from there-forth will want to be your friend. Here is an example of what I mean:

Here are some new vocabulary, all of which are heavy sexual inuendo:

Chobo: The person who said this is currently having sex with a Chocobo, best known for its role in the Final Fantasy series.

Turbo Newbie: The person who said this is currently having sex with a newbie (and really fast too!)

Gosu: This stands for "Got Object Stuck in anUs."

That brings us to the conclusion of this guide. I hope you have as much as I do meeting friends over battle.net! Maybe I'll see you online there (don't whisper me)!