Wednesday, Apr 23, 2003 by Zack "Geist Editor" Parsons (@sexyfacts4u)
The world is a dangerous place, full of drunk drivers and unmarked anti-personnel minefields and even in the supposed quiet sanctuary offered by nature we are at risk. We are in danger of being attacked by wild animals, which are sort of like drunk drivers only with less Old Style and more teeth and venom. To allay your fears and help to prevent a dangerous situation from turning even dangerouser we have assembled a guide on surviving a wild animal attack. This is that guide. Actually this is the introduction to that guide; the actual guide is below this introductory text and spanning multiple pages thereafter.

Step 1: Make Yourself a Bad Target 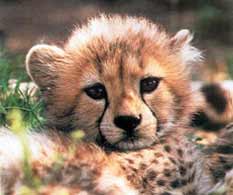 Do not be fooled by cuddle naps.The first step to surviving a wild animal attack is actually to prevent the attack entirely by making you an undesirable target for potential animal assailants. Animals are just like people in that they don't want to attack someone who either doesn't have anything they want or can obviously kick their ass. This is not as easy as simply drinking weight gainer shakes, weightlifting incessantly, and walking around on stilts while covered in tiger urine. Not every animal responds to the same predator/prey signals, so you need to cover all the bases or at least those that apply to the area you will be in. To help prepare you we've broken the animals down into categories, just follow the preventative measures for each category that applies to you.

Biting Cats
Examples: Cheetahs, pumas, tigers, lynx, panthers, particularly large otters, wolves.
Prey Prevention: Biting cats are known to be extremely insecure and almost all of their reported attacks on humans are simply examples of cat machismo gone too far. They want to prove to you and their friends that they are in charge. There's no point trying to out macho the biting cats, just let them know that you're not a threat to their masculinity and they'll leave well enough alone. This can be achieved by frequently urinating in your pants, wearing shirts with pictograms of large predatory cats killing you (they can't read), and a giant foam hand with the number one printed on it that you wave enthusiastically and shout "wooooooooo" whenever you see a biting cat. Occasionally their attacks are also hunger motivated so try not to carry snack foods appealing to biting cats like blocks of cheese, bowls of milk, catnip filled plush animals, hunks of bleeding human meat, or toy fish attached to sticks by a length of string.

Stomping Things
Examples: Elephants, hippopotamuses, rhinoceroses, Israeli bulldozers, buffalo herds, rolling boulders.
Prey Prevention: Stomping things are characterized by a tendency to run fairly quickly and crush things under their massive bodies. They are often keenly intelligent and have an insatiable lust for human blood. Luckily they also have a number of deep-rooted phobias that can be used to make you an unacceptable choice of prey. It's widely known that elephants are afraid of mice, so construct a suit of live mice by covering a pair of overalls in hot glue and then rolling in a pit full of mice. Those pesky elephants will keep their distance. Hippos are supposedly fearless, but research we conducted seems to indicate that they are in fact afraid of massive explosions. Luckily the Far East provides us with a solution in the form of the martyr vest, a convenient contraption designed with pouches for plastic explosives. Works great with hot glue and mice! Where there's smoke there's fire, and nothing persuades a charging rhino to change direction like a raging inferno. Since fire can be hazardous to your health we advise a mobile pyrotechnics display as opposed to the more convenient but more painful self-immolation. Nothing stops an Israeli bulldozer like giant bags of money, buffalo herds can be put to rest with hypnotism, and rolling boulders are just unstoppable. Sorry. 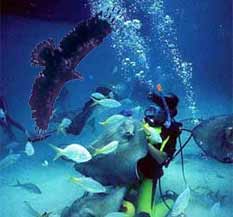 An eagle swoops down on an unsuspecting deep sea camper.

Venomous Villains
Examples: Scorpions, cobras, eagles, death adders, asps, black widow spiders, chemical factories.
Prey Prevention: Having lethal venom in glands in your body is sort of like being perpetually drunk, and drunks tend to swagger, brag, and be violent. This characterization of drunks is pretty fitting for venomous creatures as well. They don't have any real agenda, they're just out to have fun and cause trouble. The anathema of their rabble-rousing lifestyle is boredom so to ward off their attacks just make attacking you a proposition sure to be extremely tedious. Wrap yourself in dozens of rolls of duct tape or complexly knotted coils of rope. Leave obscure riddles that provide clues to your location in case you are being tracked. Venomous creatures will find maybe two of these mindbenders and get sick of trying to catch you. When you set up camp for the night climb to the top of a tree and leave a grease coated ladder behind as the only means to ascend to the top. Do anything to frustrate or otherwise draw out the pursuit of venomous creatures, they just can't stand that shit.

Aquatic Adversaries
Examples: Deep sea squids, octopi, Canadians, hammerhead sharks, eagles, giant deep sea squids, colossal deep sea squids, unbelievably huge deep sea squids.
Prey Prevention: Nothing ruins a peaceful camping trip in the forest quite like a colossal deep sea squid emerging from a nearby oceanic trench and crushing your entire campsite into its clacking wheelbarrow-sized beak. They're just a total downer, much like their other water breathing brethren. The only way you can discourage aquatic predators is to make them think that you're one of them. Construct a massive fake squid shell using a large vehicle as the base. I suggest using hoops of lightweight wood bound together and then covered with a shell of papier-mâché that has been painted bright red. Then cover this layer of paint with organic or electronic photophores that simulate the complex color changing ability of squid. Link all of this to a complex computer-controlled system so that if you are approached by a squid you can convince it not to attempt to mate with you.

Even though you're prepared you can't completely guarantee that you won't be attacked. Just like in human society the animal kingdom can be a stressful place and some predators just can't handle the pressure. They crack and go insane, and if you're in the wrong place at the wrong time you could be on the receiving end of a lion's equivalent of shooting up his high school.
Previous More Guides Next