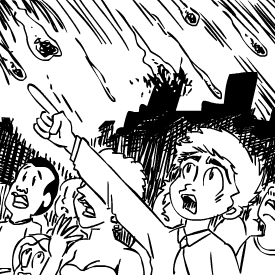 Q: Is this a formal black tie event or can I wear my stained sweatpants and wife-beater? (asked by Lysdexique)

A: No gang-related clothing (NBA memorabilia, baggy shorts, FUBU gear). Anything else is acceptable, as long as it lacks visible blood and semen stains.

Q: Do I have to bathe in heaven? (asked by Lysdexique)

Q: Will I be able to point and laugh at all the godless sinners while I ascend to the pearly gates? (asked by Lysdexique)

A: Only if you preface it by stating, "I know I shouldn't laugh at this, but..."

Q: Will this be a vertical ascension into Heaven, or a teleportation? (asked by Videodrome)

A: It's vertical, and you will be traveling at such incredible rates of speed that the jet stream will have little to no effect on you! This is why the Vaseline is important. The Ascension Control Center in Heaven will ensure your path of travel does not conflict with any forms of public transportation of large, floating entities in space (with the possible exception of Galactus, who's just a huge asshole).

Q: Do they have the Internet in heaven? If so, is it just the good parts of the Internet, or are there furry art websites there too? (asked by Hammerite)

A: Currently there is no internet access in Heaven. Once a "good part" of the internet is discovered, it will be immediately allowed in.

Q: As a child, I was led to believe that all dogs go to heaven. Will my dog be waiting for me or will he be left behind? (asked by Stryder)

Q: Will ascensions be done alphabetically or morally? (asked by Pedrophile)

A: Rich people get to go first. Then minorities (to show everybody that Heaven isn't racist). Then people who are on their deathbeds or in really bad pain (migraines do not count). Then all the cripples, retards, and children (kids are basically tiny, cute retards). Then the women who aren't rich, minorities, or crippled retards. Last of all, the rest of all you white people. That's Obama's Amerikkka for you!

Q: Do I get to meet God? Can we be facebook friends? (asked by Sergg)

A: That is a terrible question and you are a stupid person! Haven't you heard the phrase, "God is everywhere?" Look it up (on the internet)! This means if you want to meet god, all you have to do is look anywhere; that includes your desk or inside a toilet or up in a tree. He's everywhere, so you are meeting him every single second, all the time, every day! To be quite honest, you should be sick of him by now. I bet he's sick of being in your toilet.

A: It depends on the series, if they have found a western distributor yet, if the vaginas / penises are mosaiced, and how many dickgirls it contains (currently restricted to less than four).

Q: Will I be able to bring virtual items with me as long as they are within 5 blocks of my player character? (asked by Earwicker)

A: All your virtual items, including Xbox Gamer Points, PSN trophies, and Steam achievements will transfer to Heaven and be converted over to the official video game scoring system of the afterlife, the Ascension Online Network(c). Unfortunately, AON(c) is currently down due to some sort of security failure, but will be back online shortly. Please be patient in the meantime; you have all of eternity!