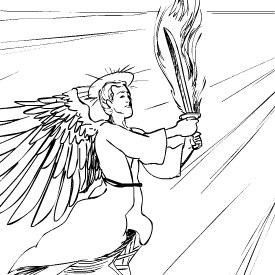 Q: Does this post-apocalyptic world look like Detroit or will the world simply cease to exist? This is bugging me and I want some answers. (asked by HighClassSwankyTime)

A: It will resemble the vision featured in various 80s Italian action movies. Men will have brown, poofy hair, full beards, and black leather jackets. Bad guys will join gangs which have some retarded theme, such as "the rollerskating gang" or "the mime gang" or "the really excited about the concept of gang rape gang." Women will have giant shoulder pads and pearl necklaces. Robots will talk to you, although you probably will not want them to. There will either be too much or not enough light at any given time. Oh yeah, and lots of barrels with fire inside.

Q: Should I buy my own Ray-Ban sunglasses, or will they be provided when I join said gangs? (asked by Brotax)

A: Comically large, pitch black aviator sunglasses will be provided upon entry. A full staff of Saints will additionally help you blowdry your hair, in addition to offering a wide selection of optional jean jackets to choose from.

Q: I've heard that the meek get to inherit the earth. Is there going to be a will reading or some sort of system to determine how the earth gets distributed among meek people? (asked by HopWallace)

A: There will be a worldwide lottery determining which meek person wins what. After the winners are announced and no winners step up to claim their prize (due to the fact they are so meek), every meek person will instead win a full version of Minecraft, which they can use to inherit their own earth. It probably won't be the latest version, but they will be provided with detailed instructions on how to download updates.

Q: Is the economy in Heaven driven by socialism, capitalism, or an entirely different system? (asked by a medical mystery)

A: The economy of Heaven basically follows the classic "Art Contest / Cutting Board" economic theory. That is, the principles of entering an art contest and winning a cutting board.

Q: Do I have to be awake to be taken into Heaven, or is this like "The Langoliers" where those who are asleep are the ones who are not taken? (asked by Toad on a Hat)

A: It is like The Langoliers in the aspect that you will encounter Balki Bartokomus at some point. Also Captain Brian Engle.

Q: What's the pearly gate stance on online poker? I mean I'd imagine it'd be pretty cool for a bunch of people to get their bankrolls back. (asked by Prostheticfoot)

A: There is no need for money in Heaven since you can instantly have whatever you desire! Well I guess there's a need for money if you desire it, but most people in Heaven only desire money so they can hold it in their hand and use it as a conversation starter. "Hey, remember when we all wanted this?" they'll say, before pointing to the stack of money in their hand. Then their friend will reply, "Yeah, that sure was stupid! Now all we need is this!" and he'll open his hand and a tiny Jesus will stand up from the inside of his palm, waving at the camera.

Q: You mean we can all have Jesuses? As many as we like or are they enforcing a quota? (asked by Karate Bastard)

A: The literal Latin translation of the word "Heaven" is "buffet of unlimited Jesuses." Feel free to take all you want, as long as you use what you take.

Q: Lowtax, since you mentioned pets will go to their own specific Heaven(s), should I bother investing in a post rapture pet adoption service, or would it just be a waste of time? (asked by Benminnn)

A: It is in the best interest of both you and your pets to murder them Friday, thereby ensuring a safe passage for them to their respective heaven, and saving you the money of rapturesitters.

Q: Which of the Monkey Island games will I be allowed to play in heaven? (asked by PepperSinclaire)

A: Heaven isn't exactly "current" when it comes to licensing recent media, particularly video games. Their catalog pretty much hits a brick wall around 1989 or so, which won't please most gamers, but will strongly appeal to fans of ESWAT Cyber Police.

Q: When I'm in heaven, do I get to meet famous celebrities and historical figures or do they have a separate area within heaven so they're not hassled by regular people? (asked by Grant DaNasty)

A: In Heaven, "superstars" are the people who were tortured and had to suffer through the greatest amount of pain and emotional hardships during their lives on Earth. So basically you'll be fawning over that girl everybody made fun of back in high school, the fat lump of pasty Downs somebody crammed into a wheelchair and stapled a filthy tumbleweed to the top of her head. Now it's her turn to shine!

Q: When the rapture comes will the accesnded ones mind if i take their car? (asked by In1Ear_OutTheOther)

A: After the end of the world, you may steal any car you find, just as long as it doesn't have one of those ridiculously long stickers on the rear window which depicts every single member of their family as a stupid-looking stick person. If you see one of those, you must first make sure every stick person has either died or ascended, and then you must draw a white line through each one.