Not so fast bristol. Two can play at the meteor mogul game.Waddup, L-Crew?

Bristol has been shakin' the cooch on TV you might have heard mrs. palin went on that stupid show with bristol and she got booed. Did she get booed? Yes, she got booed. But, did she? Shut up TV news yes she did get booed GOD you people are the worst.

Except for my home boy Lawrence "Law Dog" O'donel who had me on his show to talk about me being mayor of wasilla. Dude is on that channel with Keith Ochocinco who somehow loses to glenn beck even though he reads short stories from a book on fridays and that stupid lesbian broad Chris Matthews.

Their studios are like in a spooky old cannery and parts of the floor are falling through and they had to scare a bunch of bats out right before I went on the air.

Law Dog pulled some little stunt like asking me all the exact questions Mrs. Palin got asked to like compare and contrast our styles. I felt like I did okay, but it pissed me off a little because I didn't have like a coach telling me what to say like "Alaska is a state of America" and "I support black people."

You can watch my interview here:

So to be fair I should have had some prep time, to like, take in the questions and then I could draw on all my information I have been gleeming lately. So I decided to go back through and answer all the Sarah Palin interview questions. I am hoping Law Dog puts up a correction to fix my answers.

When it comes to establishing your worldview, what newspapers and magazines do you read regularly? 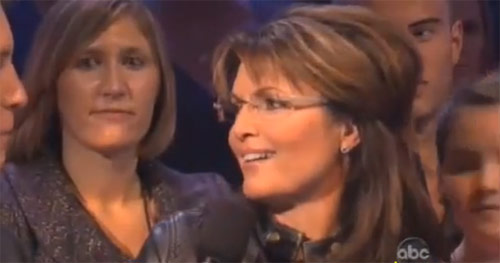 Mrs. Palin reads onlines computer, and also, she one time couldn't leave her bedroom because she thought there was a home invader downstairs because Todd got a new haircut and she didn't recognize him.

I have been reading books from several sources to gain as much knowledge as possible. I have been reading the dictionary a lot, a math book, encyclopedias britanica my uncle has in his basement. I also read a lot of magazines to stay up on things. I read a lot of popular mechanics because I want to know about solar airplanes and americas next mars rocket. Also I read Cars magazine about cars because that's an important issue of fuel economy and oil.

What's your position on global warming? Do you believe it's man made or not?

Global warming is not real because of emails in Anglia. CO2 is a green house gas and I propose putting CO2 in those little canisters to shoot off pellet guns. Also for paintball. It only makes sense because paintball is more popular than ever and pellet guns are good for home defense because they look like a real gun and you can still buy them at Tuck's dad's store even if you got arrested for hitting a police horse with a chair. This didn't happen to me this is just a hypothetical scenario I have come up with based on some previous data information pertaming to my cousin Nokia who might have done six months and had to record a commercial for channel 3 about not hitting animals with furniture.