THANKS FOR THE EMAILS FAGGOTS

Anyway, forget about SPENCER. There were also some emails from people who are republicans but got all bent out of shape for some reason. I don't know. I guess it just shows you that there can be dipshit republicans too it's not just the liberals.

Check out what dumbass french sounding Ryan Landrieu wrote me:

Oh no not lawyers! Lol! I'm so scared of lawyers!

Has anybody in history ever go their ass kicked by a lawyer? Those dudes are like the biggest tools ever and they couldn't fuck anyone up. Besides I think this dude is making this shit up. If hes such a law expert why doesn't he just sue me?

And the rNC? I'll take my chances! I know most of those dudes and we're cool.

Okay chodes. I got one more email to post up in this bitch. It's from a dude who saw my shit I wrote but he is pretty much emailing me about being at the republican party on TV. This guy is about the worst and if I saw him in real life I would knock his fucking teeth down his throat.

First off, motherfucker, that tattoo is not gay at all and don't you dare fucking call me a gay ass. I will kill your ass so hard you will never be able to sit again. I will fuck your face up so good some doctor will look at your dental records and match you up with a bag of teeth. 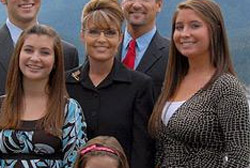 you seeing the same shit I'm seeing sawtooth? cuz I see six fine ass titties and not sawtooth or his dickSecondly, don't you dare talk shit about my tattoo. The onyl gay thing about it is that gaywads like you got to see it. That shit is the EXACT shit Howard Stern did so are you calling howard stern a gaywad? Ha! Fucking babybooey motherfucker...your hole argument is bullshit.

I get this fine ass bitch and I know you saw how fine she was. did you see those fucking titties on bristol? She look like she got stuck in a tire swing. That shit was insane. There was milk flying all over the place later cuz she already full up from that crazy ass retard baby her mom makes her hold all the time. Trunk or whatever. Bristols feeding that baby like crazy and shes gonna be feeding are new baby which I am thinking of naming Space Station to fuck with her mom lol

Bottom line sawtooth is that you are mega gay and your basically just jealous. Jealous of my fine ass bitch, her fine ass sister willow and her fine ass mom. Its like somebody is belt feeding me high caliber pussy. RATATATATAT nigger. What now?