MY CAREER TRANSJECTORY IS INTACT 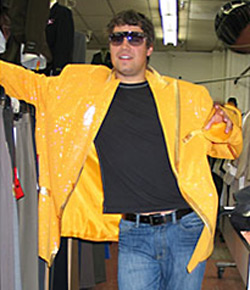 check out this sweet ass dick tracy coat tank found, empasses on the DICK lolYo, what up, pussy patrol?

Got so many fuckin emails from people wondering what I think about mrs. palin. First of all my condolences go out to the family of Michael Jackson. I don’t know what that crazy fucker was up to sleeping in a bed with a bunch of kids drinking wine and getting their wieners out or whatever, I ain’t gonna judge, but my prayers be upon you peace.

Now let me go ahead and react to this Sarah Palin resignation from governor of Alaska thing. First of all, big whoop, like she is gonna stop being famous and making big time money. She is set. One thing she was always good at was figuring out the angle or whatever and I guess she is gonna quit as governor to run her fish farm and play basketball.

She said something about people saying mean shit about Turg and I agree but then she said the world needs more Turgs and I was like "yall keep him in a cage and feed him leftover oatmeal and hog feet and shit. if you think the world needs a million of him why dont you take care of the one of him." Mean Internet people? Her and todd log onto the modem with W W W dot fucking bad parents dot motherfuckers. Why else did their daughter end up pregnant and in high school? Ridiculous. They need to take some responsibility for that shit.

No matter what she says the palins wouldn’t concentrate on the family if they were doing a crossword puzzle called The Family. Which is good cuz if you aren't focused on the family then you can explore jobs. Like she could write a book or you know do whatever with energy as an energy expert.

I also seen that lactonic motherfucker Todds got some special snow machine he made that’s like an ice skate crossed with a snow machine he calls it an ice machine. So he could patent that shit. 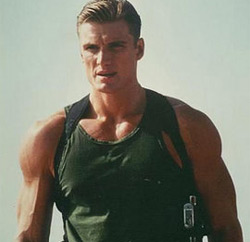 look at that beefcake and just imagine him kicking open a door while some synthesizer music is playing and hes got like two 50 caliber machinegunsI’m not worried about mrs palin it’s like Dolph Lundgren always said I’ll Be Back.

Second let me tell you a thing or two: this has no bearing on my career. My careers transjectory is not dependent on the palin family any more. My manager and bodyguard and spiritual advisor Tank has been having me do all kinds of stuff. Like I need to get seen so I flew to LA and New York.

I met with some real industry heavy hitters like remember that guy who made Ghostbusters? I met with his cousin and also the brother of the guy who made that website where dudes put their units through pizzas and then a girl blows them. That guy was awesome. Then I went out shopping on the sunset strip and got tmz to put some pictures up of me and Tank. Or maybe it was daily beast. One of those fucking things.

Last week when I heard about mrs. palin resigning I was in New York meeting with some Jews. They run Randal’s House or batman or some shit and supposedly tank is gonna get them to publish my book for a million dollars. That has been my number one focus these days. Whether or not mrs palin is governor or president or whatever comes after president (UN president?) I need to feed my kids trod and tripp.