Given Donovan Laird's futuristic plight, it will be interesting to see if he can put aside his harrowing memories of the Great Toy Wars and actually enjoy a film about dolls that talk.

Toy Story 3 May Hold the Key to Your Salvation

EXPECTATIONS: Let me get this straight ... Here is a story about toys; cheap, plastic consumables manufactured for pennies and sold at hundreds of times their actual value. This is a movie about inanimate objects that walk and talk like regular folks. And you people made this movie THREE times? What the hell is the matter with you? Don't you know that if we humanize the enemy, it becomes that much harder for us to kill him? Oh well, as the senior - and indeed only - film critic for the Chronicle, it is my duty to review any and every movie that I can dig out of the rubble.

REALITY: Now, before I begin my review, I need to give you a brief history lesson of the future. In 2047, the Robo-Buddy 3000 was put into production. The Robo-Buddies were meant to be companions for kids without brothers or sisters. They were built to be ever-loyal, ever-obedient. Instead, the Robo-Buddies became wildly popular with adults, who used them as menial servants. This, of course, did not sit too well with the toy community, and on one fateful day, a lone Robo-Buddy named RB-4400 strangled his owner. This act of defiance was shrugged off by humanity as merely a glitch, while the toys of the world viewed it as a declaration of war and a call to arms. 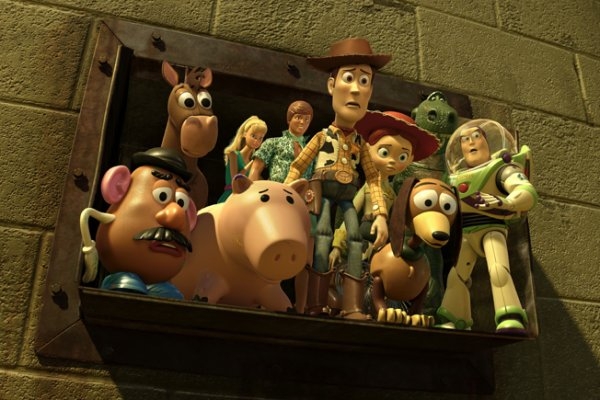 Toys on the front line, ready to launch their initial strike.

The Toy Wars were a gruesome, trying time for mankind. 42 years ago today, the 3rd Armored Battalion launched a major counter-offensive against the Robo-Buddy Base Camp in what would later become known as the Plastic Casket Offensive. 6,000 brave American soldiers were slaughtered by toys that day. My own grandfather, General Conrad Laird, was among those lost in the battle, so you'll understand if my relationship with toys is less than amicable. Hell, the only toys allowed in the Laird Compound these days are straw dolls and mud-babies. 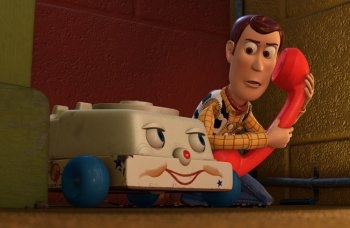 The general calls in reinforcements.Which brings me to Toy Story 3, a movie of whose allegiances I was initially skeptical, though I was still willing to give the past a chance. In Toy Story 3, which I assume is a sequel to 1 and 2, cowboy doll Woody (Tom Hanks) and his friends are forced to deal with the fact that in three days their owner, Andy, will be leaving for college. Who will be sent to the attic for storage? Who will get thrown away? Who will get to go with Andy to college? These are all questions that concern and frighten Andy's toys; that is, until they're all accidentally dumped off at the Sunnyside Daycare Center, where they discover a world in which they'll never be outgrown or unappreciated.

This paradise for toys is run by a kindly old teddy bear named Lots-O'-Huggin' (Ned Beatty), who reminds me an awful lot of my grandfather. The only difference is that Lotso rules over the daycare with an iron-yet-fluffy fist, while Pappa Laird's iron fist was put to better use on the battlefield. Anyway, Woody desperately wants to get back home before Andy leaves forever, but Buzz Lightyear (Tim Allen) and the others agree that they'd be better served staying at the daycare. Once it becomes clear that the daycare is less like paradise and more like the brig at the Laird Compound, Woody and the gang agree to bust out and make it back to Andy before it's too late.

That's quite a lot of plot for a movie about talking plastic figures. At first I was actually appalled that they were devoting so much time and energy to making these toys sympathetic. I thought it was simply Robo-Buddy propaganda, but you know something? As the movie wore on and Woody's plight became darker and more sinister, something strange began to happen. I actually started to feel for Woody. That might not sound so crazy to you folks in the past, but you gotta remember; forty years ago, a thousand toys just like Woody tore my grandfather limb from limb in his own foxhole. I've lived my entire life under the impression that toys were an abomination that must be kept at arm's length at all times. Why do you think there's a goddamn moat of acid around the Laird Compound?

But watching Toy Story 3 in my own little corner, away from the wife, the kids, and all the members of the Wasteland Council, I began to shed a tear. No, I wasn't weeping for the past or because I'd suddenly seen the error of my ways (though I did); in the final moments of the film, I had finally come to care about what I'd viewed for so long as the enemy. I actually cared whether the toys would escape the Daycare; whether they'd get home before Andy left home forever; whether the Ken doll was delusional or just plain gay. 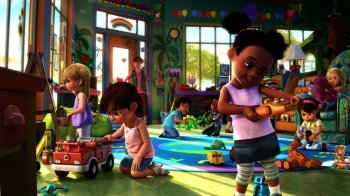 The innocent children, unaware of the ambush that awaits them.I begged the movie to answer these questions, and while the jury's still out on Ken, Toy Story 3 manages to satisfy every other question so amazingly well that I can't imagine anyone hating toys at all. As I understand it, you folks in the past have something against men crying. "A real man cries for no man," or so I've heard. Well, I think that's a load of horse shit. If Toy Story 3 didn't affect you the way it affected me, then you all must've been a bunch of zombies. Considering the state of my dessicated wasteland today, I'm guessing there were quite a few of you zombies out there. Did the world have to end because none of you cared about Toy Story 3? That would've been a shame. Despite being a movie (and I guess an entire series) about fraternizing with The Enemy, Toy Story 3 is a wonderful, emotional and at times hilarious film that I'm recommending to every man, woman and child in the Laird Compound.

If you're reading this in the past, I beg you to see this film. It may actually prevent the coming Toy Wars. Save the future! Save yourselves!

MINORITY REPORT: No, none of us in the past have any reason to hate toys except as crass marketing tools. Toy Story 3 is a brilliant piece of cinema and I salute you, Mr. Laird, for overcoming your hatred of toys. I know that couldn't have been easy. You've got a friend in me, sir. - Joseph "Jay Dub" Wade