IT'S A WONDERFUL LIFE, MITCH! 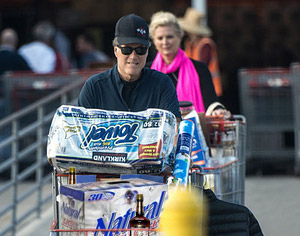 That's a start. See if Sununu has some blunts. I know that waddly fucker rides trees.I know the spiral you're on, my man. I can sympathize. After the creepy old McCobb dude failed to become president and Mrs. Palin wasn't vice president and I didn't get to be made ambassador to endor or whatever I had some depression issues. Who is keeping an eye on those ewoks? Building traps like little teddy bear al qaeda. We need inspectors on that shit. Take away their logs. I thought about driving my stolen '88 Bronco into a wall to end it all and collect insurance on the Bronco which might not have worked because the insurance papers were out of date by three months and also in the name of someone named Cody which is a total douchebag name. But then I thought hey hang on my unit still works and there are so many babes out there who are dumb as hell and hot. I need to live, man.

What you got to do is realize the good impact your life has had on all those around you. Like if I'd died all those women would not have had crazy back-to-back orgasms and gone to another dimension of pleasure. If you'd never been born, like you're probably wishing, the world might not be so pretty. Let me show you what it would be like.

Your family would be like 600 people smaller and Ann would have married a Jewish dentist and live in Malibu. You never would have baptised her atheist dad so he would be in oblivion instead of being SUPER PISSED but immortal on the alternate mormon planet. All of your weird fucked up clone sons wouldn't have been born and who could have run all those investment funds to help people out? That's what they're for, right? Helping people? The mormon church would have one less ivory obelisk and nobody would have funded that school to teach mexicans about cyclops or whatever it is with you shitheads. 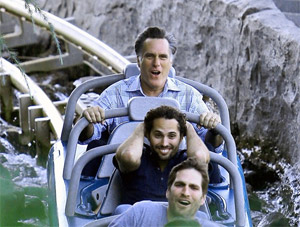 This moment would not have happened where you're riding like a baby rollercoaster with your grown sons screaming like idiots. Do peyote and ride a hanging rollercoaster and get back to me.Massachuseps would never have had romney care it would have been called something else like Joshcare and Josh would go around acting like a big dude, real tough guy asshole, because he gets all the credit. And I don't mean your son Josh. You have a son Josh, right? I can't keep track.

You never would have run in the Republican primary either time which doesn't make any difference in 2008 but in 2012 it causes Herman Cain to get the nomination and he actually beats obama because people get super confused in the voting booth because all of the states with republican governors made it picture only voting and then put super blurry pictures into the voting booths and also both pictures are Herman Cain. Then immediately Herman Cain deals with the physical cliff by creating 9-9-9 mode on the country, which rotates exactly as foretold by michele bachman and reveal 666 mode and herman cain is the devil slow smiling at us as the white house catches fire.

Meanwhile in Alaska I am as usual getting crazy tang time, wrecking every ripple from Russia to Maine, leaving babies across the continent like johnny appleseed. Suddenly my good times come to a crashing halt as I am forced to fight the forces of satan in a hockey match. I have a team on my side made up of all the greats but they're all put in the penalty box by corrupt refs and it's just me on the ice against a five man offense with Satan. Of course I proceed to grind them on the plastic until their faces come off and drop gloves to hammer satan's midriff. But because of you somehow not being there I lose the game despite my fighting skill and superior hockey abilities. And everybody after that is satan's slaves and he makes them build a rocket or whatever to go to cyclops and fuck up all your afterlife mormons with machetes and karate moves. Like it ends with him straight up spock chopping your dead dad and then making John smith fuck a horse. 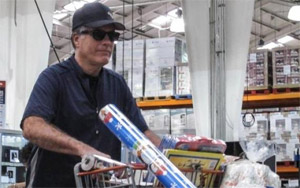 Oh look everybody it's blues legend Starch McCracker.People need you mitch. You may not feel like it. They may not say it. But without you we would all be in the grips of satan. And not like some bullshit mormon satan, I mean the real satan.

Blaze up. Soak in some rich and rare. Go rent a yacht or something and go out in international waters and blow off some steam. Do a bunch of crazy international waters shit like shoot rocket launchers and rebroadcast NFL games to whale pods and deface currency and cross a human with a tomato plant. You've got the money. Buy a robot and treat him like shit. Get a Chrysler 300 and just go nuts on it with some golf clubs. Pretend it's Jay-Z's Phantom like everybody else does.

Other than that I guess you can ride rollercoasters at Disneyland and buy bottled water at Costco dressing like your hat is trying to escape you. If that makes you feel better. Do whatever you want. Eat cottage cheese after midnight. Crank Jellicle Ball and do donuts at a safe speed in a parking lot.

Or do. Whatever dude. Your fucking funeral.