IT'S A WONDERFUL LIFE, MITCH!

WHAT UP all of you can just go ahead and close this shit or read some comics about mspaint or whatever the fuck it is you do when you are not having your mind blown by my truth because this is specifically for Mitch Romney who fucking blew it with his election. I got to talk to him about what went down because the dude is messed up and I think he maybe gonna do something crazy like jump off a bridge. Which like if I was standing there by the bridge I would be all DO IT BITCH DON'T BE A BITCH GERONIMO because hell yes I do want to see some dumbass jump off a bridge but since I'm not around and he'll probably land ontop of somebody like one of those bicycle wagons for little kids I think it is my solman duty to convince him his life has value.

So what up, Mitch? How you been?

I saw some pictures of you hanging out gassing up your car I'm just going to guess it's an FJ cruiser and it probably has a CD changer in the back full of Sherryl Crow and Andrew Lloyd Webber musicals. 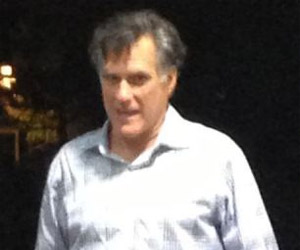 This is just depressing, Mitch. You look like you stayed up all night partying, but you don't party ever, so that's really troubling.You looked pretty haggard, Rum Tum Tugger. Like somebody who just got laid off from a call center at the end of a Friday. Like you just got off the phone with Dale from Oklahoma trying to sell him on vitamins or some shit and Rajeev was waiting with your last paycheck and he was like "sorry mitch but we need the desk space for somebody who can make a deal" and you pulled off your headset and you went all William H. Macy on him like "gosh darn it rajeev I am in here at 6 AM to 6 PM bustin my boulders trying to sell these vitamins but nobody wants them it's obamas economy" and Rajeev is like "well if it's the economy mitch then why is carol selling so well" and then carol comes by and she is big and fat and wears sweaters but she has this voice like a teenage girl and she gets all these horny dudes to buy fuckbuckets of vitamins because dudes are dumb as shit and you're like "rajeev come on man I got a family I got to support" and he's like "you can collect your stuff Otis will show you out" and then Otis is the guy who used to be on call center but they found out he was a cop for a while and so they gave him a flashlight and made him the security guard and he's like "sorry mitch" but he's not because he didn't like you and nobody else liked you either you aren't interesting and your ideas are bad.

So think about that for second because your shit isn't that bad. It's not like you gotta go sell blood or suck dicks or something mitch. You got 400 billion dollars in the capeman islands and swiss accounts and all of your kids are working for hedge funds. You have a beautiful family and a beautiful wife by the standards of fat old white people. It wasn't like you were a roofer and you really needed this president job to make ends meet because you were gonna lose the house otherwise.