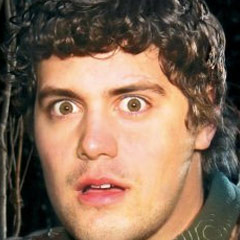 What up, Internet dong lovers?

I arrived in Tampa Monday after a short visit to Orlando. I had some shit I had to settle with Goofy. Turns out they don't all have the same goofy, that it's a bunch of different goofy guys. Also it's not a cartoon it's a guy wearing a suit. After I cleared things up with the police I might've escaped in one of those bayou boats with the big fan on the back. Then I think I fell asleep again and had some nightmare that will.i.am was singing a really teribble song to me from Mars. When I woke up I was crashed into a Quiznos in Tampa.

Getting into the convention was easy. This stupid outfit didn't get me any tickets so I just want up to the pickup window and said I was Tucker Carlson. They said somebody already picked up those tickets and he looked like a crazy smug douchebag, so I told them I was actually Mitt Romney's son Teenwolf and I was just pulling a gag on them like dad likes to do. That got me right in with a VIP pass in a holder with a hologram on the pass and everything. 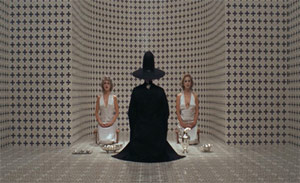 I don't know what was up but this guy tried to get me to do drugs with him and I was like "Sorry dude, got my own."I went down this corridor of white tiles and into a room with a blind man and a tree with its roots growing out over the tiles. It was fucked up in there and scary like when you're on the wrong side of a 5 on 3 powerplay, only I couldn't punch my way out of this one.

I ran through some double swinging doors like at a hospital and there were all these naked guys hunched over. A smaller door opened and a sexy woman brought in a cow. It mooed all sad and a buzzer sounded and the guys ran at it and just tore it apart and started eating it.

It only got more messed up from there, but I did see a lot of famous people.

Jan Brewer, face like a giant fingerprint made out of tanning cream and dentures. She was stretched out on a hot rock eating bugs. 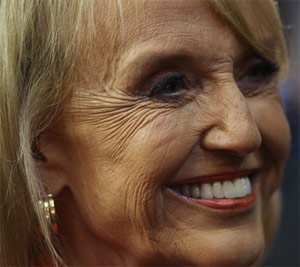 You can hear her face move when she smiles which is a threat display btw.She told me that in Louisiana they have something called a King cake and you're lucky for the next year if you find the little baby inside and she had a big old cake and she told me "carve off a hunk of that and bring it here" and I cut into it and I realized it was just a big pile of little toy brown babies covered in cream cheese frosting. The cake broke apart and all the babies crumbled and plopped out and Jan Brewer slid down off of her rock and started gulping them up and I got the hell out of there.

Myself. I looked at my reflection in a pool of water and suddenly it stood up out of the water and tried to touch my junk. It's okay that because it was wearing an Islanders jersey and I was like "fuck that kemosabe" and I beat the shit out of this unholy dobbleganger.

Paul Ryan was watching Fresh Prince tapes with his wife and kids. The weird part was he would not smile or anything, but any time Carlton was on screen he would perfectly mouth all of his dialogue along with him.