Pirates of the Caribbean Online

Oh look! It's Disney trying to milk every dollar out of it's money cow Pirate of the Caribbean! Not that doing so is unique in any way and certainly every company does it. At least they haven't created a card game, book series, toys, underwear, bath products, or lunch pails yet. They have? Fuck it! The MMO Market is still somewhat fresh (and susceptible) to take a dumping on anyway! At least it isn't Korean (I think). 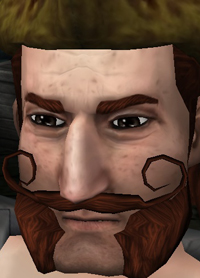 My character Sven. Class: Badass Motherfucker.I had hesitations about reviewing this game but not only because I have a hell of a time trying to spell "Caribbean" for some reason but rather I actually did enjoy the first movie. To be fair, if I had something that sold as well as Pirate movies I would milk it until the utters dried up, the cow died, and the meat rotted away. Hell, even then I would try to sell the land the cow died on just to get as much "booty" as possible. Of course if I ever made a successful movie about pirates, some shit heads would probably pirate it off the internet creating a black hole of irony (yeah not a creative joke; piss off).

I know this is going to shock you so hard that I will be up for murder charges: this game was pretty lackluster and at best, average. However, even falling into the realm of "average" already makes this game leaps and bounds better than any other MMO I have had the misfortune to review. That isn't to say that Pirates of the Caribbean is that good but it really isn't that horrible and for one reason: the overwhelming amount of cut scenes. The voice acting is convincing enough that I actually had to use IMDB to see if they somehow coerced Johnny Depp in pretending to be a gay pirate just one more time.

Now, if I haven't driven you away because I actually said something nice about a game I reviewed, you can look forward to my same old "here is my half assed (and unfair) review of this game." Let's start with character models and creation! The character models are so cartoony they make World of Warcraft look like virtual reality. You know how in every Disney movie they have that one "muscular" guy that has a torso shaped like the letter "V"? You can be him! Or if you want, you can be a short and stubby man too! ENDLESS POSSIBILITIES! 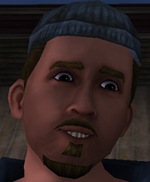 R.I.P. Tubbs McGeeThat reminds me! Sliders! Every damn game with sliders must remind you that they have sliders. Sliders for character customization is the new sliced bread for the internet. If your game doesn't have sliders it can fuck right off as far as I am concerned! Never mind that the sliders really don't do a great job at letting me make a perfect likeness of... well... any human alive! Sliders.

After the dissatisfaction left upon you by the crappy slider mechanic (and the fact that it took you four hours to end up with something that still looks like complete garbage) you are ready for the game! The dreamy captain Jack Sparrow rescues your sorry ass by kicking a door open from the inside. Now I don't know if Jack was also a prisoner but no else seems to indicate that he indeed was. This leaves me to wonder how he got into the cell and why he bothered to lock the door behind him. Eh, who cares, it isn't like people watch Disney movies for the story anyway-- anything to get that brat to shut up; am I right (I don't have kids)?

So basically you are thrown into some kind of tutorial filled with cut scenes and explanations about some pirate chest and some girl with huge breasts slapping the hell out of you because Jack gave her the clap. Upon escaping the Island under bombardment (from no ships in sight) a tubby lard of a captain explains he almost left you to die. Thanks a lot you fat asshole! 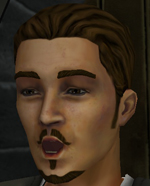 So eager to please.However, tubs doesn't make it very far since Skeletor beams onto the ship and sucks his skin off for not turning over Jacky boy. The excuse that he doesn't do the same to your character lies along the lines of, "dead men can't tell no tales Arrrrr!" and instead he makes you walk the plank and swim away from the ship Die Hard style as he blows it up.

Another plot hole explodes onto your face since you really didn't make it far away from the island when all of this transpires and you swim back in the direction of the tutorial Island. Nevertheless I arrived on a much bigger, newer island by swimming alone. If I could just swim to the other god damn Island why did I bother take a boat in the opposite direction? I can suspend only so much disbelief before running around with a cartoon pirate starts to become a tad bit unrealistic.