Ruin Online mixes internet lingo, horrible graphics, and a broken combat engine into one giant mess but almost has enough character to be a game so horrible that you can't look away. Imagine having a bruise on your arm but you can't help but poke it even though it hurts... unless I am just strange. 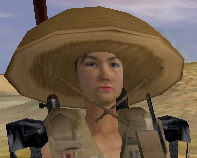 Nice hat.Once upon a time, a few teenagers got together and decided to make a game and needed a name to appeal to other teenagers. "Broke Ass Games" became the flagship pretend company to produce a horrible game they dubbed Ruin Online. However, it seems they were a bit optimistic by pluralizing their "company's" name since they never made another game. I tried to delve deeper into the history of Broke Ass Games but their "about us" page only had, "Thanks for your interest!" Later I would find out that their slogan, "Games so fun, they leave scars" would only hold partial truth since Ruin Online has nothing to do with fun.

While I downloaded and patched Ruin Online I wanted to know what to expect and fortunately for me, the developers placed a game trailer on their front page. The only way I can describe this trailer is that some guy repeatedly knees a half naked girl in the crotch for a few seconds resulting in a battle that ends when she jumps off a building. Your thirst for jerky fighting and unrecognizable graphics left unquenched? Well good thing that part 2 contains little more than zooming in on the same girl over and over again! I had nothing to do with the creation of either video and found it very hard to attempt to top something so ridiculous for the end of this article.

Apparently, Ruin Online can't seem to shake the beta phase or the developers just like to call this client "Beta5" to look cool. Even though they have gone through four other betas (unless they started with negative numbers or can't count), some bugs still exist:

Ruin Online looks particularly bad and mostly resembles Second Life in that it has horrible graphics and naked people. That's right! There are tits and dickless guys in Ruin Online; move over Age of Conan you were beat to the punch on your only selling point! The only thing missing from this game that would complement Second Life are creepy furries having sex while penises rain down upon them. Even the GUI doesn't quite work and I had to run the game in 800 x 600 resolution to get the dumb thing to fit on the screen. This still left my inventory display in two different spots but since Ruin Online doesn't have much to look at, I wasn't too disappointed.

When the game's patcher finally finished I had a three gig chunk of shit stinking up part of my hard drive but in all fairness, the patcher did a great job of informing me of every .png file it installed (all eight million of them). While the patcher assigned the .png files to their proper space, I had a chance to look at the "store" page and find out that for fifty dollars I could buy the in-game models for my own games! For only ninety dollars I could buy both the male and female models. Hot damn! Now I could make a game with shitty looking characters just like my heroes at Broke Ass Games! 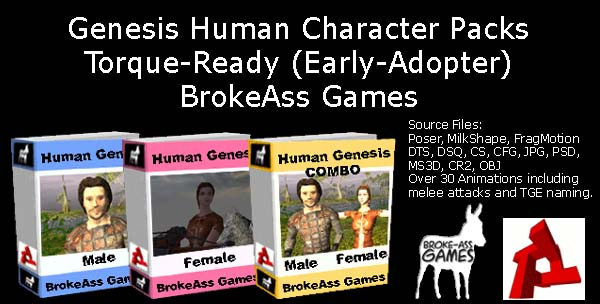 After creating a character, a loading screen popped up informing me that I started in "Outpost #1337." Ah the first internet meme and I didn't even have to play yet, this game moved quickly! Eventually I woke up in a tube that I could simply walk directly out of and noticed a reflection in the mirror. Not only did I lack clothing but I had apparently misplaced my penis and seemed generally happy for no good reason. Outraged, I sent a kick into the face of a bald man who just stood there and looked at my penis absent crotch. Apparently you can't attack friendly NPCs (or even unfriendly ones at the time) in Ruin Online but that didn't stop me from flashing my nut sack at everything I saw.

To my relief, the developers left most of the in-game models completely naked without reproductive organs which cut back on my embarrassment. Women did, however, have giant polygonal tits and most of them had a "default" tag above their name which clued me in that the game might not be finished even after four prior betas. You'd think they would have fixed the NPCs in the starting area by now but this Ruin Online after all, where the naked roam free.

A fence kept me safe and away from a monster that the developers dubbed "brown zombie" which more resembled African tribesmen. Uninterested with these brown zombies, I wandered around until I found a fighting pit and tried to make money ala some blood sports. However, I could not damage the other combatant and he could not damage me so I took a standing jump over a ten foot fence and somehow made it to my next destination: Shanty Town.