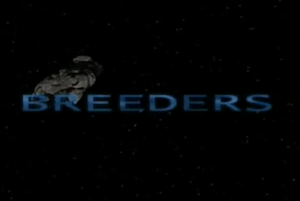 Overview: An extraterrestrial monster who looks like the illegitimate gut-muffin of a Xenomorph(tm) and one of the latex tiger aliens from critically-acclaimed '90s space opera Wing Commander crash-lands on a women’s college in Boston and starts kidnapping co-eds in Duke Nukem(tm)-style goo cocoons down to the literal open sewer where he impregnates them with his evil(?) alien spawn.

The Case For: Supported by the Isle of Man Film Commission, which is great news if you’re Canadian, because it finally proves that yes, there is another government out there with worse taste in sponsoring movies than yours!

The Case Against: This movie is 5% borderline copyright infringement, 5% closeup creepshots of women’s legs, and 90% poorly-lit shots of people wandering around a sewer system as slowly as they possibly can before getting slaughtered like the worthless shit-brained livestock they are. 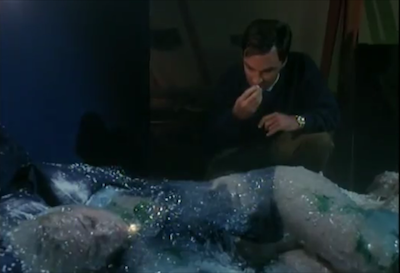 Hydrogen: My favorite part about this week’s movie is easily that we get to follow a Predator knockoff directly with an Alien(s) knockoff.

Trillaphon: Even better, an Aliens knockoff from our old nemesis director Paul Matthews, who apparently didn’t learn any lessons after Grim, deciding instead to more or less remake exactly the same piece of shit monster movie with Breeders.

Trillaphon: Okay, to be fair, he added some really uncomfortable nudity to help with the pacing, and this time there’s actually kind of a main character, at least. To be unfair, that main character is essentially a rapist. Also, he looks like if Steven Seagal fucked Armand Assante - and is just as articulate.

Hydrogen: Not nearly as much nudity as the name Breeders would make you imagine, still - and the pacing might be even worse than Grim. Unless you’re a serious leg man:

Trillaphon: I feel like I need a shower. Or an exorcism. Maybe both.

Trillaphon: I dunno, he seems like a breast guy to me.

Hydrogen: That would be contrary to the evidence thus far. It seems like his superpower is hearing the tiny micro-vibrations of women’s thighs rubbing together from five hundred yards away.

Trillaphon: So in other words he’s Spiderman, except he was bitten by a radioactive cricket, and instead of fighting for truth, justice, and being a petulant nerd, he’s just a massive pervert?

Hydrogen: Correction: massive pervert and shitty humanities teacher. You can understand why his lectures are just overflowing with students, who he likes to leer creepily at from out of the darkness.

Hydrogen: Well, as far as I can tell the only faculty members at this college/boarding school/women’s minimum-security prison are him and the janitor, so I suppose their options are limited.

Trillaphon: I do appreciate how clearly the director’s vision comes across RE: women’s legs. Few directors would take advantage of the full frontal women’s locker room scene just to zoom the camera right past the ass toward their ankles, followed by a deeply disturbing match cut from the floor drain to the gaping hole leaking milky white liquid into the sewer, where the monster is standing there watching and going “Mmmmm, yessssss”. But Paul Matthews is a bold, weird man.