Bruce Lee Fights Back From The Grave

The same taxi proceeds to take Bruce to the next martial arts school, and the cabbie (whose face is now suddenly covered by approximately three-hundred different bandages) has the nerve to ask Bruce for fare money. Bruce pays him with a kick to the face instead. It takes Bruce about five minutes to walk inside the school, and we get our first taste of the horrible footsteps. Apparently, whoever dubbed this movie thought it'd be cool to dub every single footstep in the movie and use the same annoying, loud tap shoe sound to do so. It's not. He runs into this crying woman and asks for the master of the school. The girl cries and says he's dead. "He seemed to commit suicide, he fell from a roof," she says. She points to the guy's coffin and Bruce immediately flings open the lid to check. The guy is obviously dead and his face seems to match the picture of the dude on top of the coffin. Real smooth move, Bruce! What, did you expect the real Bruce Lee to jump out of the box and slap you silly for being a no-good leech? 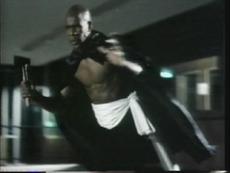 The first victim of Bruce’s killing spree is this goofy looking African-American superhero. Black guy dies first? Yeah, no clichés in this movie! Nice cape, though.

This is followed by a weird incineration scene, where Bruce fondles one of the remaining pieces of bone, which is either a chunk of spine or a huge tooth. We cut to a belly dancer at a bar, and Bruce drinking scotch at that very same bar. Then it cuts back and forth between the belly dancer dancing and Bruce drinking about ten times to show that Bruce is drinking a lot and that the belly dancer is surprisingly unattractive and chunky. Bruce drunkenly stumbles back to the martial arts school with the dead guy in a pet carrier bib. See, Bruce brought the incinerated remains to the bar and carries them around in a box tied around his neck with a picture of the dead guy on the front of it for much of the movie. It is never clearly explained who the dead guy is, why Bruce cares about him, and why he carries him around. Apparently he's just some guy who ran a martial arts school that Bruce was going to do a demonstration for.

Bruce goes back into the school and tries to sleep in an office or something, but he's interrupted by a black superhero with a hatchet. Well, he may not be a superhero, but he's black, wears a cape, and looks preposterous. Knowing 70's ethnic superhero naming convention, his name is probably "Black Hatchet" or "Afro Axe" (even though he's bald). Anyways, they fight, Bruce makes a bunch of stupid funky chicken sounds, and Bruce wins by running and jump kicking through a window into the other room where Black Hatchet was making a grab for the sword. Yes, that's the second time he's kicked someone through a window. Glass was really crappy back then. 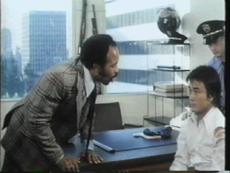 Damn police! Always hassling innocent vigilante murderers! Why, if Bruce were a policeman, he’d be taken off the case!

Jump to the next day, and a hilarious scene at the police station. The silly-looking chief of police (I think) is chewing out Bruce for killing Black Hatchet. Bruce just sits there, dull and boring as usual, and makes curt, rude responses to the chief's demands of proof or witnesses to Bruce's claims of self-defense murder. He progressively manages to make the chief madder and madder. Here's a snippet of the conversation:

Chief: Self defense. What can I do? You could get the chair!
Bruce: And what sort of chair is that?
Chief: You what? What's with this guy, he wants his own special kind?
Policeman: He wants to have his own maid.

Well, the exact dialogue of those last two lines were hard to make out, but that's what it sounds like they're saying. After some more yelling, the chief receives a phone call from somebody important and as a result Bruce (and the dead guy) is set free. [The beginning of the AMAZING interrogation scene, and the second window kick. A must see! (742K, Windows Media)]

Bruce walks out and is invited to get into a car because somebody wants to talk to him for some reason. He sits in the back with a puffy-cheeked woman who winks at Bruce, causing him to feel great shame or embarrassment or possibly intense desire… it's hard to tell what his reaction is supposed to be because the dude can't act. They eventually get to a house and the girl leaves him in the living room, so Bruce acts like an ass and fiddles with the piano, fondles cushions, and messes around with other miscellaneous things while he's waiting. Eventually he meets a gay-looking Japanese Businessman (I'll call him "Gay Japanese Biz Guy" from now on) who talks nonsensically at Bruce for a good bit. He says he paid the $2500 bail for Bruce because he likes him, further confirming my gay suspicions. He asks Bruce, as a way to repay him, to find a girl for him. Then Gay Japanese Biz Guy either shows Bruce a picture of the girl he's looking for or a Polaroid of his genitals, I can't tell for certain since we're never shown what's in the picture. Regardless, Bruce refuses and leaves. The Gay Japanese Biz Guy stamps his feet in a huff. 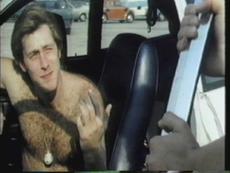 "Come on, baby," indeed! It's the award-winning bare-chested man! How did he win the medal he wears around his neck? Why is he so hairy? What happened to his shirt? Are all rapists this incompetent? Why is he in this movie? It’s all a great big mystery!

Cut to the girl that was mourning at the martial arts school standing in a parking lot. She goes to her car, gets in, and gets tapped on the shoulder by an award-winning (well, he has a medal around his neck) bare-chested man hiding in her backseat. It seems like they're about to suddenly kiss and fall in love for some reason, but they don't because the girl runs off and a tap dance chase ensues. The constant click-clack of the footsteps makes the entire scene sound like an amateur production of "Riverdance," and the girl's slutty outfit wasn't designed for running so she bounces all over the place. They run around a huge parking lot filled with ugly cars for awhile until the girl loses him. She goes to get back into her car but… SURPRISE! The award-winning bare-chested man is in the front seat! He says, "Come on, baby," but for some reason his assurance doesn't cause the girl to strip off her Daisy Duke's and get down. She tries to run away but the guy tackles her, so it's a good thing Bruce shows up out of nowhere still wearing the dead guy bib to kick the guy's ass and save her. [Bruce talks tough and saves the day! Take that, Mr. Award Winner! (547K, Windows Media)]

Bruce and the girl go to another parking lot, and while engaging in more nonsensical conversation they see a mysterious cigar smoking man in a trench coat. Bruce runs to catch him, but he hits his knee on some luggage like a goon and the guy seemingly disappears into thin air. They head to a cafe where the girl works and the she reveals that she used to work for the dead guy and he had built the gym up from nothing to be "the in place to be." What the?!? The gym has the visual appeal of a homeless shelter and probably smells of Asian man sweat! She goes on to say that everything was going great and he was raking in mad cash until the son of a lawyer he was training tried to smash a brick with his head and hurt himself. Then lawyer daddykins sued him to hell. As Mr. Dead Guy lay crying on his gym floor, a Japanese man, a black guy, a white guy, a Mexican, and a cowboy (!!) showed up and took him away for four months. She doesn't know what he did during that time, but I'm thinking those Village People wannabes stuck things in his orifices that just didn't belong. Then the guy comes back for a while and everything is great until he gets a telegraph, walks out, and is found dead a short while later. It's a thrilling story. So thrilling that Bruce abruptly walks out.