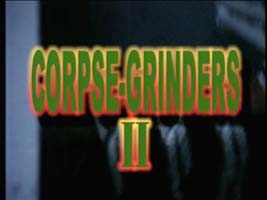 Overview: The heirs of Lotus Cat Food resume their uncles' business of making their product out of human corpses while a group of vaguely cat-like aliens coincidentally come to Earth looking for food. Nothing ensues.

The Case For: If you enjoyed the original "Corpse-Grinders," this will be like a fond walk down Memory Lane.

The Case Against: For every subplot that doesn't go anywhere in this movie, an angel loses his wings, which are then picked up by Satan's impish minions and used to beat the angel into a coma. Also, cat aliens?

All glory to Ted V. Mikels! This man has had an illustrious career in shitty horror movies. He is the major creative force behind such legendary films as "The Astro-Zombies," "Mark of the Astro-Zombies," and "Blood Orgy of the She Devils." He also produced, directed, and co-wrote the original "Corpse-Grinders." Twenty-eight years after he made that last masterpiece, Ted V. Mikels decided there was still another story to be told in the dark and gritty world of chopping up dead bodies to make cat food. Yes, he had left some stones unturned. Now was the time to rectify the mistakes of the past.

By now I'm sure most of you have seen "The Corpse-Grinders," but for those select few of you who have yet to treat yourselves to that masterpiece, allow me to summarize the plot: two guys decide to make cat food by grinding up human corpses. They become very successful and encounter such memorable characters as an unscrupulous gravedigger and his meddling wife, and a snooping doctor and nurse. Soon, all the cats in town that eat this food develop a taste for the gamy tang of human flesh and start attacking their owners. It's a lame premise, to be sure, but at least it's a premise. In "The Corpse-Grinders 2," Ted V. Mikels takes the plot of the first movie - and I mean the exact plot of the first movie - and makes one crucial change. Instead of all of the cats in town going berserk, they don't! Get it? It's genius! Also, Mikels adds a new element to this already incredibly plausible and realistic story - cat people from space. Mikels, you nut, you've done it again! 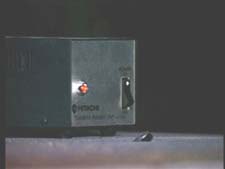 One of signature visuals of "The Corpse-Grinders 2" is the grinder itself, a clanky contraption of rotating blades and numerous pointlessly flashing lights. You know you're in for a quality film when the power switch for the grinder is clearly labeled "HITACHI CAMERA POWER UNIT." That's bad news, right there. And that's literally only the second shot of the movie. You have to wonder why Ted V. Mikels would even bother including that shot, when it's nothing but a straight-on view of the power switch. My only guess is that it's his way of saying, "Look, I can't even make it ten seconds without fucking up, don't expect 'Schindler's List.'" After the lameass title screen, which you can see above, we transition into a shot that has opened classic films from "Star Wars" to "Star Wars" - text scrolling into the distance that explains the background of the story. The thing is, in "Star Wars," that text is necessary, since it explains background information that would take a huge chunk of time to act out. In this movie, most of the information contained in the text is actually explained later on in the movie, rendering the text totally useless. In fact, some of the text is directly contradicted by the events of the movie and contains obvious typos. But since it saves me the trouble of explaining this all later, and since it's enough of a joke in itself that I don't have to come up with anything else funny to say about it, I will now recreate that text for you in its entirety with its original spelling and punctuation:

IN A GALAXY MANY LIGHT YEARS AWAY THERE IS A PLANET CALLED CETA ITS INHABITANTS EMULATE THEIR ANCESTORS, THE CAT-WORSHIPPERS OF EQYPT AND ATLANTIS. THERE IS A SHORTAGE OF FOOD AND WATER ON CETA AND THE CAT-PEOPLE STRUGGLE FOR SURVIVAL AGAINST THE ELEMENTS. THE DOG-PEOPLE OF THE NEIGHBORING PLANET TRAXIS WAGE WAR AGAINST CETA AND HAVE PLANS TO INVADE

So the inhabitants of the lost city of Atlantis had the technology for space flight on the colonization of other planets and they left Earth for Ceta, right? I assume the people of Eqypt, which is probably close to what we call Egypt, never made it off Earth, since the cat-people only ever mention their ancestors from Atlantis. Now doesn't it strike you as just a bit of a coincidence that out of all the planets in the universe, the cat-people decided to colonize the one that was right next to a planet of dog people? I mean, that sort of sounds like they were just asking for trouble. And if the cat-people had interstellar technology centuries ago, why the hell are they struggling for survival against the freaking elements now? Call me crazy, but I would imagine that a species capable of colonizing a new world would be able to master the advanced technology known as the rain slicker. And if the planet is nearly depleted of all of its food and water, why would the dog-people of Traxis want to invade? Wouldn't they just be getting a planet that can't support life? Also, if it says in the text that Ceta is running out of food and water, why do the cat-people never mention a need for water ever again in the movie? Seriously, they just search for food. The whole water thing never comes up. Hey, wait a minute! If there's no water, exactly what elements are the cat-people struggling against? The transition metals? Other than those points, I have no issues with anything brought up in the text. I do, however, have an issue with the incredibly stupid-looking burst effect used to make the text disappear once it has all scrolled onto the screen. 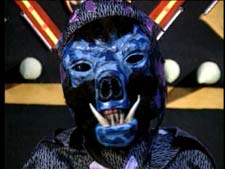 Oh man... that's a dog.I think there may have been some sort of misunderstanding between Ted V. Mikels and his crew about the meaning of the word "special" in the term "special effects." We see a dogfight (pardon the pun) between the ludicrously dumb-looking dog-aliens of Traxis and the degraded, pathetic cat-people of Ceta in CG spaceships that would make Steve Oedekerk vomit out his ears. Every time we see a cat-person up close, they are wreathed in crappy lens-flares that serve no purpose other than to distract the viewer from the utterly humiliating appearance of the cat-people themselves. I'd like to find out how much the actors got paid to portray cat-people in this movie, because then I would actually know just how much human dignity is worth.

The cat people look and talk just like normal people, only they all have to wear some manner of headband or other headgear that some huge, ridiculous ears have been attached to. From pointy, fleshy ears to big, round, fluffy ears, it is apparently illegal on Ceta to have ears that are any smaller than the rest of your head. To put it succinctly, everyone on Ceta looks like an idiot. Even the children, who all show their adulation for their cat-gods by wearing T-shirts with pictures of a cat head on them. Those are the ones I really feel bad for. You can at least be sure that the adults are all doing this of their own misguided free will. There are a few kids on Ceta who are clearly the children of the adult actors. You just know that the adults said to their kids, "How'd you like to be in a movie?" I somehow doubt they actually said, "Hey Billy, how would you like to be in an unbelievably terrible movie with a forty dollar budget and wear stupid cat ears and a moronic T-shirt that all of your friends at school would pound you into sawdust for wearing?" And what advanced society would force their children to wear T-shirts to remind them who their gods are? I mean, I know some people wear T-shirts with references to Jesus on them, but they're hardly standard issue. You don't see Hebrew schools handing out T-shirts with pictures of Yahweh's face silk-screened onto them.