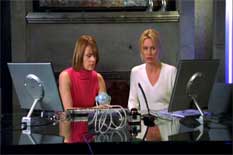 This is exciting because they are on the Internet!Sondra's sister Misty walks in and joins her on the computer machine. They talk about the fantastic things she has been doing over the past few minutes, shortly before deciding to tease Werther by claiming he's a "sex-o-phobic" who is afraid of women. This causes his computer to black out and display the word "SEX-O-PHOBIC" in huge letters which inexplicably zoom in for no readily apparent reason. I wish I had a computer program which randomly did that. I'd be entering data on an Excel spreadsheet when all of a sudden it would black out and display the words "BEETS: $1.93" in huge neon green letters. Oh what a dream!

Werther gets very angry and remarks "you both die" which causes their computer to display the words "you both die." The threat of death causes them to walk away while Werther hacks into their system and swipes both Ben and Sondra's personal information, as well as their screenname on the wonderful American Love Online service. He does this through the Internet, all of which is very high tech. Werther, posing as Sondra, who was previously posing as Ben, goes to a private chatroom with the ever-so-sexy CremBrulee. Somehow Sondra and her stork-like sister make their way into their private chatroom, which is simply video footage of some girl getting murdered. This worries them because they are stupid. Werther sends a huge message reading "GAME ON" in humongous letters which serves to illustrate the point that he is ridiculously stupid as well. He gets himself a date with CremBrulee and agrees to meet at her house, which makes sense because most people agree to do this with people they meet in chatrooms on the Internet.

Werther gets into his BMW and takes off to CremBrulee's house so he can murder her, therefore somehow spiting Ben. I'd like to take a moment to point out that this movie sucks and I hate it. I'd also like to ask how Werther got such a nice apartment and car despite the fact that he has no job or source of income besides "murdering people on the Internet," which I did not believe was that profitable. Werther sends a message to Ben's computer reading "TOO BAD YOU'RE NOT WATCHING BECAUSE I'M ABOUT TO KILL YOUR GIRL." Now excuse me for a second, but what is the point of sending a message to somebody if you know they're not there and are not able to read it? Do people walk up to empty houses and shout at the door, "HEY I WISH SOMEBODY WAS HERE BECAUSE I'D TELL YOU 'HELLO' IF YOU WERE BUT YOU'RE NOT SO I GUESS I'LL BE GOING NOW"? Perhaps this is another mystery of the Internet. The high tech Internet. 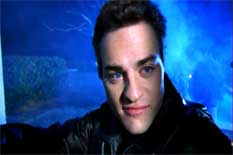 As Werther drives down the road, he begins to hallucinate and see blood on his windshield which he frantically tries to wipe off. This conclusively proves what scientists have been saying for decades now, that using the Internet causes you to see blood on your windshield. He pulls into CremBrulee's driveway and begins reading poetry to her over the phone, which is either romantic or creepy or just plain stupid, you pick. He somehow conveys through his Livejournal poetry that he's not going to make the date with CremBrulee, which causes her to make a facial expression that I can't quite describe on the grounds that her acting ability rivals kitchen cookware. Once she falls asleep, Werther straps on a webcam and night vision goggles, breaks into her house, and murders her. This is all broadcast to Sondra and her dopey sister through the American Love Online chatroom because hey, this is the Internet and is very high tech and there's nothing you can't do on the Internet! Sondra and Misty see this horrifying live broadcast and engage in the following riveting dialogue: 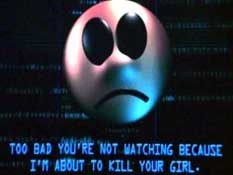 The Police, naturally, don't believe their ludicrous claims, forcing them to call up "Matheson," an FBI agent in the "cyber crime squad." Matheson is played by none other than Huey Lewis, THE Huey Lewis, who apparently took a break from not being popular so he could instead star in this movie. Ol' Huey has a rather unique approach to acting, one which involves him staring at the cue cards and reading his lines while trying his hardest to not act. Sondra attempts to upload the files of Werther murdering people to the FBI CYBER CRIME SQUAD HEADQUARTERS, but Werther has sabotaged her computer and everything she sends has been replaced with footage of dancing cartoon characters. You know, because this is the Internet and it is high tech. Huey Lewis explains that the reason she is seeing cartoon characters is because the footage is encrypted and she needs a skilled programmer to crack it. If you falsely believe none of this makes sense, then keep in mind this is the Internet and is also very, very high tech.

Sondra and her sister call a company called "PC Brainiacs" and request somebody to come over and "copy our hard drive." Since it's roughly 2:00 AM, they agree to do this because it's bizzarro world and nothing is as what it seems. The representative from their company comes over but Werther calls up Sondra and claims the employee is a fake who "hacked their computer's data," causing them to scare the innocent technician away by screaming at him and making him stand out in the dense fog. Meanwhile, back at the FBI CYBER CRIME SQUAD HEADQUARTERS, Huey Lewis yawns. That was the whole scene, reprinted here in its entirety. Wow.

Werther accesses the house's "mainframe security" by pushing his laptop's ENTER key. Some shit on his screen flashes while he stares forward and drives up to their house, disguised as the PC Brainiac representative. He meets Misty and comments, "looks like there's going to be a storm," despite the fact that it's already raining outside and there's water everywhere. After a few minutes of randomly mashing keys and looking at green ASCII symbols, he somehow manages to magically transform the footage of cartoon characters dancing into the live murder feed he broadcasted in the chatroom hours before. Do I need to remind you that this is the Internet and is very high tech? Because it is, you know. The dynamic duo discovers that Werther is, in fact, pretending to be the PC Brainiac guy, which must've been a real leap of logic considering he is the only person retarded enough to continuously quote gothic poetry while performing mundane, everyday tasks. He grabs Misty and continues to blabber on and on about god knows what, shortly before cutting her wrist with a knife. Werther explains that she now has "20 minutes to live" since apparently he knows exactly how much blood is in her system and at what rate it is dripping out of her wrist and how her body will react to such a thing. This begins a countdown to Misty's death, with many different digital clocks ticking down and emitting ridiculously loud noises every millisecond. Oh the race against time has truly begun, my friends!