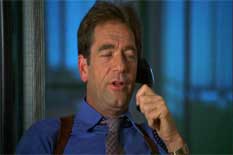 Oh Huey, I hope you're on the phone with your agent, informing them that they are now fired.Huey Lewis and the FBI CYBER CRIME SQUAD pull up and begin arresting some man in a robe, only to discover they're in the wrong house. This is because of the Internet. Meanwhile, back in the cyberhome, Sondra is attempting to lock Werther out of the house by talking to the computer and listening to its lethargic voice drone on about... things. She convinces the computer to send a 20,000-volt electric shock into Werther, who responds by promptly falling into the pool. Using her handicapped skills of hobbling forward, Sondra waddles over to Misty and wraps a rag around her sister's wrist just as the "countdown to death" timer reaches zero. Oh lucky days! Misty, despite continuously losing blood for 20 minutes, can suddenly walk around freely because she has the peach rag of protection wrapped around her wrist!

In Sondra's frantic race to apply this lifesaving piece of cloth around her sister, she forgot to notice that, due to continuity errors, Werther has vanished completely from the pool and is now somehow alive and running around her basement. The night vision goggles he's wearing not only allows him to see in the dark but also illuminate his entire face although nobody can apparently see this bright green light highlighting his entire head except us folks lucky enough to own the movie. His goggles read "INFRA RED: ON," so the wearer knows their red infra is on. As Sondra limps around the house and looks for something, Werther locates her sister once more and removes the peach medical rag, causing her sister to start bleeding again and begin another countdown until Storkneck's death. He then proceeds to fall off a balcony and die, thus ending the movie. Oh yeah, Huey Lewis swings by and shows up in the nick of time, assuming "the nick of time" means "a considerable time after everything important has happened."

As Misty is being wheeled out on a stretcher, she remarks, "God is a woman." I don't understand what this comment has to do with the movie or any of the events in the movie, but I guess I should assume it has something to do with the Internet and being high tech. As the movie fades out, the camera pans to the monitors displaying some more Werther poetry. Oh what a cliffhanger ending! The terror truly never ends in ".com for Murder!"

So what did I learn from ".com for Murder"? Well I learned that the Internet, despite being very high tech, is a dangerous place full of deadly things like chatrooms and firewalls and snakes. I learned that handicapped people should not use the Internet because somebody will try to murder them, as they rightly should. I learned that the term "encryption" means "turning video footage of a murder into cartoon characters dancing" and "firewall" means "an actual graphic image of some fire." I also learned that director Nico Mastorakis should probably stick to directing "Ninja Academy 2" instead of trying to make movies about online cripples who are murdered by goths in romance chatrooms. If you are reading this movie review, that means you are using the Internet, and you're as good as dead my friend.