The Curse of Lizzie Borden

The next day, the students (who are all best friends, by the way, which increases their odds of dying astronomically) meet outside a Lizzie Borden museum for a class field trip. This is particularly impressive, since their professor told them neither the name nor the location of this museum, and it is evidently located inside a private residence. As they approach, one of the students remarks how the house must have been designed to look just like Lizzie Borden's old house. This student is an idiot. The house is boxy, white, and thoroughly modern, and it looks like any other house than can be found throughout the non-ghetto sections of Los Angeles. Their professor is nowhere in sight, but Cassy, eager as ever to learn more about Lizzie Borden (dun dun dun!) encourages her wary friends to go on inside. 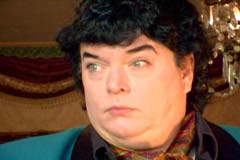 Wow. That's, uh... that's something, right there.They are greeted at the door by the museum's owner and curator, Josiah Moody. Moody is a little eccentric, and by "eccentric," I mean he gives off an air of predatory homosexuality that would make the entire Bravo TV network give a collective shudder and reconsider their target audience. The first thing he does, in his mincing, overdrawn way, is engage in a ludicrous five minute routine with Eli, one of the students, over the fact that Eli had the audacity to enjoy a cigarette on his driveway. If you think that watching a five minute exchange between an asshole college student and the real life equivalent of Snagglepuss is somewhat less than thrilling, you would be right.

At long last, Moody lets the students into his home, where he lays down three ground rules that all visitors must obey:

Just when the students are starting to hit their limit of creepy museum guy for the day, their professor jumps out from around a corner and reveals that the whole thing was just an act intended to get them good and creeped out before they saw the Borden memorabilia. Moody was just pretending! He isn't really a boy-hungry creep, he's& well, actually, he is a boy-hungry creep. Regardless of whether or not it was all an act, Moody doesn't change his behavior one bit. 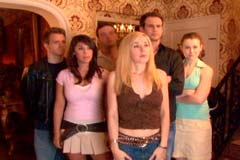 L to R: Captain Knowitall, Trustia Funderson, Doctor Douche, Cassy, The Oblivomatic 5000, and What's Her Face. Moody finally gets on with the tour, which consists of telling the students things they already know, and then letting them wander the grounds of his home, which he named Maplecroft, after the estate that Lizzie bought for herself with her inheritance. Somehow, I doubt the original Maplecroft had orange trees or an in-ground swimming pool in the backyard, but I can' say for sure. I'm not an expert. I'm also not certain that the purpose of going to the museum was so Cassy and Andrew could make out in the shade of said orange trees, in plain sight of the rest of the class and the guy who owns the damn trees, but that doesn't stop them.

Moody eventually brings things back to the subject of Lizzie, which gives Cassy the opportunity to spout plenty of not-at-all-worrying bits of personal trivia, such as "If she did do it, I envy her; her strength and courage," and only moments later, "If she really did do it, I admire her. She got away with murder." No one finds this the least bit odd. But then, no one finds it odd when Moody says that no one knows when Lizzie Borden died, either (June 1st, 1927). He goes on to say that some people claim Lizzie Borden's spirit haunts the house where her parents died. Of course, that house is in Massachusetts, and this movie takes place in California, so that doesn't pose much of a threat. Writer Jeremiah Campbell's backspace key must have been broken, because instead of taking out that crap about the haunted house three thousand miles away, he added a quick line about how, uh, her possessions are haunted, too. Sure, why not? 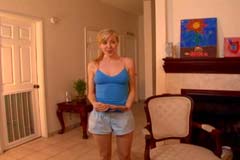 Good lord, Emma's apartment is massive! When she inevitably gets killed, I totally call dibs.Cassy stays to talk with Moody after all her friends leave. Sure enough, that night she gets together with her best friend and class/roommate Emma and her boyfriend Andrew to tell them some exciting news: Moody wants to add a haunted house element to his tour, and he wants her to play Lizzie Borden! What's more, he even wants her to move in to his house! Isn't that great! Cassy is perplexed when her friends don't seem as excited about this fantastic news as she is. Of course, I'm more perplexed that she expected her best friend and her boyfriend to be thrilled to hear that she's dropping out of school to go work and live in a nonexistent haunted house run by a guy who makes Michael Jackson look like the model of domestic normality, and yet still no one figured out that she's crazy. I'm sorry, but when your friend makes multiple statements about how much she admires an alleged homicidal maniac, then puts her entire life on hold for the chance to pretend to be that alleged homicidal maniac, you can't act all surprised when she tries to kill you. It's not like you didn't have fair warning. 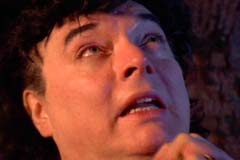 Oh, this is lovely.True to her word, Cassy moves in with Moody, who immediately gives her a brooch once owned by Lizzie Borden herself. Despite being the one who specifically said Lizzie's possessions are haunted, he seems awfully surprised when Cassy tries to murder him with an axe that very night. I say "tries," because she's really bad at it. She moves at a glacial pace, even by supernaturally possessed horror movie villain standards. Moody is probably a hundred pounds overweight, but he has no problem outrunning her. In fact, he could have gotten away from her altogether if he just ran to his car (I'm assuming he has one - it is L.A., after all). Hell, even if he just ran down the block, he would have been fine. But no, instead he comes up with the bright idea of dropping to his knees in the middle of his back yard and praying to God for assistance. Here's a tip, Fatty McGay - God already provided assistance. He provided it in the form of making your attacker walk like she's waist deep in molasses. He even made her really, really shitty at axe murdering, which is a lousy characteristic in an axe murderer. It takes her half the night to actually kill Moody, and even after he'd been hacked a few times, he probably still could have summoned the strength to get away. I'm sorry, but considering the way he lived his life, evidence suggests that Moody just really wanted to be killed with an axe some day. Cassy was just doing him a favor.

Oh wait! Did I use "Cassy" throughout that whole paragraph? I meant "the killer." Silly me. 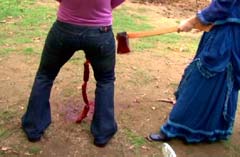 The illusion is fucking shattered.One of Cassy's B-list friends goes to visit her at Maplecroft, but finds the house strangely deserted. She wanders around to the back, looking for Cassy, and is about to give up, when - bam! - "the killer" jumps out at her and axes her in the gut, causing her intestines to spill forth. Okay, so it's not so much "intestines" as "painfully obvious sausage links," but we're expected to use a little imagination. That's fine, movies are all about suspension of disbelief. It's just& well, most movies at least try to disguise their glaring inaccuracies. You know, maybe put a wig on Cassy so when the camera bounces up and accidentally shows the back of her head, it's not so obvious who she is. Maybe coat the sausages in something goopy so they look like something that could possibly come out of the human body. But no, Ford Austin is too damn manly for any cheap tricks like that. He's going to show you a girl with half a butcher's counter coming out of her shirt, and if you have a problem with it, you can take it up with his gigantic penis.