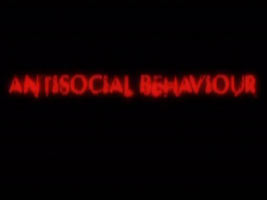 Overview: When a gang of local punks pushes him too far, a quiet man goes on a killing spree of largely accidental proportions.

The Case For: Decent acting, stays within its means.

The Case Against: When you try to make a ninety minute movie out of the first fifteen minutes of an episode of Homicide, something has to suffer.

Antisocial Behaviour. The title tells us two things. First, it tells us this movie takes itself way too seriously, as evidenced by the fact that they clearly eschewed the more obvious title, Acting Like a Dick. Second, it tells us this movie is British, as evidenced by the tendency to cram as many vowels as possible into words that were doing just fine without them. Frankly, I was happy to be sitting down to a British film, as opposed to the usual American crap I subject myself to. Maybe I'm generalizing here, but I feel like the British have a much lower tolerance for failure than we do, both cinematically and genetically speaking. In both cases, it means a much lower likelihood of encountering individuals who think that they are the world's next great filmmaker just because some idiot gave them a fifty dollar camcorder to celebrate their release from prison. I thought I finally might be in for a pleasant surprise this time around, and crossed my fingers in the hopes that I was about to watch the next great cult classic.

I uncrossed my fingers mere moments later, feeling more than a little silly. Antisocial Behaviour is quite bad; it's just not bad in the ways I'm used to. I've grown accustomed to the sort of aggressive, in-your-face badness that comes streaming out of my DVD player every other week. This one was subtle. It lured me in, deluding me into thinking that I was being at least somewhat entertained, while over in England one Vinson Pike sat behind a mahogany desk, stroking a malcontented feline and chortling maliciously, knowing that a precious hour and a half of my life was being leeched out from under me. 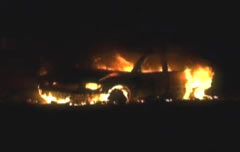 Holy crap, real fire! That would be a good sign if this image had any significance. It does not.Looking back, the signs were there all along. I was simply too blinded by the veneer of European classiness that I missed them. Here's one that should have smacked me right in the face: the director/producer/editor/co-writer's name is Vinson Pike. Vinson. As in, "son of Vince." As in "Son of Vince Bowman." And that guy is nothing but trouble. So that should have set me on edge. And yet, I let it sail right on by. In fact, I wasn't the least bit suspicious of this movie until I actually started playing it - and that's saying a lot. The DVD itself had no typos on it. There was an actual menu. These were all good signs. Then I hit play and got this introductory message (provided here with its original spelling, punctuation, and spacing):

Anti-social behaviour does not constitute criminal acts as such,but it still contributes to a marked decline in quality of life both for communities and individuals and creates a climate of fear and intimidation which is the perfect breeding ground for the fear of crime and crime itself.

Wait a minute, I said to no one in particular. You're telling me that this movie, which calls itself "a chilling tale of a man pushed too far" and terrifies viewers with threats of the main character's "unstoppable thirst for vengeance," and we're not going to be dealing with any actual crime? Fantastic, we get to watch an hour and a half of British people running around screaming, "Oh no! The possibility of crime! Blimey!" My optimism was crushed.

Fortunately, as the movie progressed, it turned out that there would be plenty of crime. In fact, if you go by the definition above, the one thing this movie was actually missing was antisocial behavior (I'll spell it however I like, dammit). Basically every objectionable action taken by any character in this movie constitutes "a criminal act as such." Unless England doesn't have laws against beating people to death, in which case, I'm hopping on the next plane.

The movie opens with a shot of a burned out car, then immediately flashes to one week earlier. So we know that in a week's time, this random car will be burned. This raises many questions, such as, how does the car get burned? Who burns it? Why would Vinson Pike think that the mystery of a smoldering Gremlin would stick in people's minds long enough for them to care about the answer to any of these questions? The sight of a burned out car might shock people's delicate sensibilities in Ye Olde London Town, but here in the United States of Jesus, we require a four-corpse minimum before we care even a little. 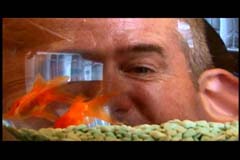 Gah!Well, if this movie is going to tell the story of how a car that we can only assume was previously not on fire came to be on fire, fine. So be it. And like all stories of foul goings-on in England, this one begins with hooligans. A whole mess of hooligans, actually. It seems that after the local ruffians finish with their daily shenanigans of tipping over dustbins and slouching at the elderly, they like to congregate in the front yard of a middle-aged man with bad skin named Jakob Kelser. Jakob is a solitary man. He lives alone, save for his two goldfish. His house is enormous and he has enough property to comfortably fit over a dozen hooligans, so he seems to be doing something right, even though we never see him go to work. It could be that he is simply living off the inheritance he received when his mother was murdered in front of his eyes when he was a boy, and he then killed his mother's murderer. It's an event that traumatized him to the point that he cannot close his eyes without reliving that fateful night over and over, often in slow motion, with lots of annoying flashes of light. None of this information actually comes up until almost halfway through the movie, but I'm spoiling it now, because it doesn't have much of an impact on anything. The purpose of Jakob's flashbacks is ostensibly to show that he had a penchant for homicide since he was a child, but none of that backstory is actually necessary to justify the actions he takes later in the film. The teens that he kills are all cocks, and they deserve what they get. 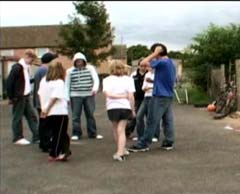 Just look at them. They'll be up to some malarkey before you know it.At first, though, the scallywags who dot Jakob's lawn like so many garden gnomes (which, coincidentally, also dot Jakob's lawn) are more mildly annoying than actually menacing. They seem to think the height of villainy is knocking on Jakob's door and then hiding in the bushes. They mostly make minor nuisances of themselves, but if nothing else, they're trespassing on the guy's property, and one would have to imagine that if Jakob called the cops - oh, sorry, the bobbies - the teens would scatter pretty easily. But he doesn't. Nor does he make any attempt to chase them off his property while brandishing some sort of vaguely threatening object, like a bat, or a rake, or the giant knife that he keeps on his wall for some reason. No, Jakob takes no action of any kind, and so the young hoodlums feel free to escalate things a bit. While Jakob is off at church one day, they break into his house and trash the place. They give it a right old rogering, they do they do. Trash everywhere, picture frames busted, toilet paper strewn all over the place, heck, someone even makes a poop in the bathtub. Once again, we have to remember that this is England. Making a poop in the bathtub is like a notch below slapping the queen to them. In America, the teens would have broken into his house, stolen all his stuff, burned the house to the ground, pooped on the ashes, and then stolen the poop. Here, they didn't even bother stealing anything. Still, it's breaking and entering, destruction of property, and vandalism, all of which are probably considered crimes.

Jakob finally calls the cops. As soon as they arrive, it is immediately clear why he didn't bother calling them before - they're completely useless. Two cops show up, a black man and a white woman, and while the woman keeps Jakob distracted with questions, her partner goes through Jakob's house stealing food. See, because evidently the whole "black people steal" thing is still funny over there. Oh, who am I kidding, it's funny here, too. But what's worse is that after the black cop makes his sweep of the house, stealing everything and anything even remotely considered edible, he comes back and tells Jakob that there's absolutely nothing they can do. Maybe if Jakob hadn't had the audacity to clean up his ruined house in the eight hours it took for the police to respond to his call, they could have done something, but now, he's shit out of luck. It's not like the perpetrators hang out outside the house on a daily basis, or like Jakob could give perfect descriptions of the likely suspects, or like there's any way of using some sort of way of finding fingerprints on a crime scene. Nope. Nothing like that.