The Bowman Trilogy, Part 2: The Other Side of Pain

Overview: When a young man is on the verge of suicide, only his fat neighbor can save him.

The Case For: A moving depiction of the inner torment of two very different men that shows how persevering is redemption in itself.

The Case Against: One of the men really, really needs to stop persevering. Try to guess who!

Last time on The Bowman Trilogy:

After examining the taut gym thriller The Trainer, I promised to take you on a journey through The Other Side of Pain, which I described as a "romantic thriller." Obviously, at the time I had not actually seen The Other Side of Pain. That was my mistake, and I can only hope that my normally tireless commitment to journalistic integrity will overcome this hit to my credibility. As they say on the streets, "If you ain't got cred, you dead." At least, that's what they'd say on the streets if real life was written by Vince Bowman. Oh, damn! I got in a dig at the Bowmeister before I even finished apologizing! I am freaking awesome!

The fact of the matter is, The Other Side of Pain is not a romantic thriller. It's more in the vein of the "two guys talking" genre, like My Dinner with Andre, except Andre is a whiny Latino kid and Wallace Shawn is a fat, hairy guy. Can you really blame me for my mistake, though? I mean, the DVD promised me that this short film "has a young man on the verge of suicide when he finds out that his girlfriend isn't as loyal to him as he first thought." Since this is a Vince Bowman film, I imagined that the young man would react to this disloyalty by dressing up as a ninja (via an overly long, slightly homoerotic montage), stumbling through a quasi-philosophical voiceover about the wind or something, and beating up the psychotic pimp who diddled his ho. It turned out that I was wrong about everything but the voiceover. 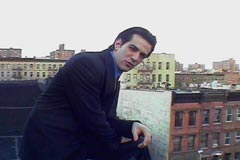 Sadly, this is the best shot in the movie.Like The Trainer, The Other Side of Pain opens with a mercifully brief speech from perpetual pubert Adam Aronson, our lovably wormy narrator. Standing on a rooftop overlooking a city street, he remarks upon the nature of the desire to live versus the desire to die. It is a fitting nod to Hamlet's "To be or not to be" speech, for just as many high school students over the years have felt tortured by endless essays about Hamlet, this movie tortures anyone foolish enough to watch it.

A thoroughly convincing TV newscast reports on a fatal car accident, then breaks for commercial. The first ad features a runner with his finger in a splint. The runner speaks directly into the camera in an even, earnest tone: 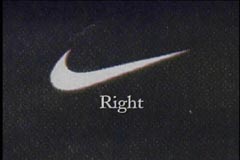 The Other Side of Product PlacementWith that, he gets up and jogs away. The screen fades to the Nike logo over a black background. This is just one of the many points I could bring up to demonstrate Vince Bowman's commitment to quality filmmaking. He didn't have to pad his film with unpaid product placement, but he did it anyway. And he didn't let little things like budget or a tiny IQ stop him, either. For instance, he didn't let the fact that an injured finger has nothing to do with running get in his way. And when he realized he didn't have the technological capacity to actually insert an computer-generated image of the Nike logo over a black background into his movie, he just filmed a close-up of the logo on a black Nike t-shirt, knowing that we, as a respectful and admiring audience, would do our best not to notice.

Someone who isn't on board the Bowman train might question why the writer/director/editor/producer would need to include the newscast and commercial at all, since neither of them contribute anything whatsoever to the rest of the film and he clearly didn't have the wherewithal to pull them off? A true Bowmaniac like me knows that there's more behind Vince's questionable decisions than that. He must be up to something. And indeed he is.

After the commercial, our collective television screen cuts to static, prompting a fat, hairy fellow by the name of Mr. Henry to shake his fist in frustration and climb up to the roof of his apartment building to fix the satellite dish. (For the record, most of the movie takes place on the roof, but we never see any satellite dish. Perhaps it is meant to symbolize the satellite dish inside all of us.) From the moment Mr. Henry sets foot on the roof, a swell of heroic music fills the air, lending some genuine pathos to this epic journey of satellite adjustment. For the record, Mr. Bowman, I am moments away from figuring out which video game you swiped that music from, and when I do, I'm tattling. 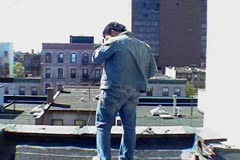 Louis may not have his girl, but at least he's still the Denim King!Just when you thought this legendary saga of a fat guy trying to fix his TV reception couldn't get any more exhilarating, Bowman throws the mother of all curveballs. Mr. Henry spots a young man standing on the edge of the roof, sobbing like a six year old girl after I put all her Barbies down the garbage disposal. Mr. Henry recognizes the young man as Louis, a neighbor whom he has know "for the past long time." Mr. Henry has watched Louis grow up, and has had many heart-to-heart chats with him over the years. He tries to talk Louis down from the ledge, but the young man is inconsolable. He will not be deterred, nor will he relent in his pursuit of the title of "Clearest Enunciation in a Vince Bowman Movie." In honor of his dedication, please read the following in as crisp and stilted a fashion as possible.

Louis: "You know me and Maria? I love her, Mr. Henry. I would do anything for her. If she told me to get the sun, I'd throw on a pair of shades and oven mitts for her."