The Curse of Lizzie Borden 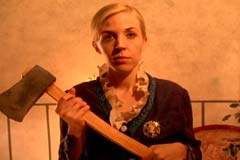 I think I've cracked the case.On August 4th, the anniversary of the original Borden murders, the professor goes to Maplecroft to pay Moody a visit. Instead, he finds an axe in his head, courtesy of "the killer." Then, just to belabor the agonizingly stupid pretense that the killer is someone other than Cassy, we see her sitting in her room, watching the killing take place. After the professor is dead, she looks down and the axe is sitting beside her. This is supposed to be a major mindfuck. It is not. Cassy is the killer, and any fancy camera tricks that try to make us think otherwise are nothing short of insulting.

That night, the remaining friends - Andrew, Ryan, Eli, and Emma - go to Maplecroft to see Cassy. None of them have made even the slightest effort to find their missing extraneous filler friend. I don't even know if they ever knew her name. They probably just called her Ol' Sausageguts. I know I would. Cassy greets them at the door, totally in her Lizzie Borden character. She speaks in an annoying "olde tymey" way and doesn't do a whole lot of blinking, but they all assume she's just sticking to her character. She sits them down and proceeds to tell a long, rambling version of the same damn Lizzie Borden story we've already heard nine times throughout this movie. But her version has a slightly different ending. Instead of just dying alone as a spinster, she claims that she sold her soul to Satan in order to get revenge on the people who falsely accused her. And thus we cross the over the threshold from dull to outright moronic. 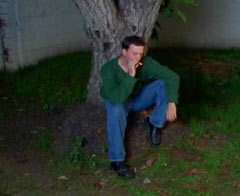 "No smoking, huh? I'll show that old man... wait, he's dead? Nice. Victory - Eli."Andrew and the others are no less thrilled with Cassy's story than any viewing audience would be. Eli heads out back for a smoke, Ryan and Emma go down to the basement to find Moody so they can tell him they're taking Cassy away, and Andrew stays with Cassy to try to get her to snap out of it. In other words, they split up in a haunted house. That's just great.

Ryan and Emma do find Moody, but he is, of course, dead. Emma's screams upon finding the body bring Andrew running, worried that something might have happened. He is relieved to discover that it's just a dead Moody, and not something important. Unfortunately, that means that he left Cassy alone. Naturally, she takes the opportunity to go kill Eli. That's what he gets for smoking on Moody's property. Twice!

Emma, Ryan, and Andrew realize their mistake and run outside, but they are too late. They find Eli dead, and Cassy standing over his body with an axe in her hand. Now, she may have an axe, but they do outnumber her three to one. Plus, every time she swings that thing, it takes her a good twenty seconds to regain her balance. I'm relatively certain that they could take her if they worked together. Of course, they don't. Cassie swings the axe at Andrew, but he ducks. Ryan, seeing the blade coming at him, ducks as well. Emma doesn't get the hint, and ends up with a face full of axe. Note that this does not kill her, and Cassy must then spend the next minute or so chopping her up in order to finish her off. Theoretically, one of the guys could have tried to stop her in that time. At the very least, they could have run away. But no, they just stand there while she slowly kills their friend. Good work, guys. 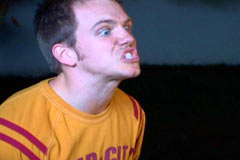 Ryan's last known photo.Ryan, who was something of a know-it-all about Lizzie Borden from the very beginning, tries a new tactic. He plays along, pretending to be one of the Fall River townspeople who accused Lizzie of the murders. I'm not really sure what he was hoping to accomplish with this. I mean, Cassy/Lizzie already wanted to kill him, so further stepping into the character of someone she wants to kill doesn't seem like the best idea. And it isn't. Don't get me wrong, Ryan does a decent job of keeping her off kilter, but after a few swings he forgets to dodge. Again, Andrew just stands there while Cassy kills his friend.

At last, it is down to just Andrew and Cassy. They have themselves a pathetic excuse for a fight sequence, which culminates in Cassy hitting Andrew in the chest with her axe. It's not enough to drop him, and he retaliates by punching her in the nose. She crumples to the ground. Somehow, Andrew assumes that one punch will have killed her, so he doesn't bother even kicking the axe away from her. He begins to walk away, but collapses from exhaustion/death. Pick whichever one you want. As for Cassy, we see her hand slowly creep toward the axe, which might be menacing if it wasn't right next to her, and there was anyone left to menace with it. 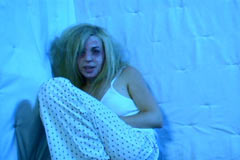 Lame. Laaaame.Suddenly, we cut to a white room, where Cassy sits, looking generally crazy. She sings the old Lizzie Borden nursery rhyme to herself, and when she gets to the end, suddenly lunges toward the camera. This is our big twist ending - maybe she was dreaming all this up in a mental institution all along. Then again, maybe she wasn't. Unfortunately, nobody cares either way. If this was all a delusion, then it was an insulting waste of time. If it was real and she was locked in a nuthouse after the fact, then there are too many questions left unanswered for anyone to give a shit about her mental problems. For instance, does anybody ever bother looking for the B-list friend or the professor? Was Andrew dead? And most importantly, did anyone really ever think that this movie would be a good idea?

Despite the beefy awesomeness of his name, Ford Austin has assembled a pretty damn weak excuse for a movie. The softcore porno music, godawful dialogue, and robotic acting aside, many of the choices made in the writing, editing, and directing of this movie are nothing short of insulting to the viewer. Presenting this thing as a mystery when the killer could only have one possibly identity is not exactly first rate storytelling. I realize there were limited resources at work, here, but were they really so strapped that they couldn't reshoot the murder scenes where the camera accidentally ruins any chance of the killer having a surprise identity? Could they really not find any way to make the sausages look like actual intestines (for example, by not filming them in a close-up)? Could they really not remember that when the axe is covered in blood in one shot, it should probably at least have a little blood on it in the next? Could they really not come up with an ending?

I think the many degrees of failure in this movie can be summed up in one small, yet indicative example of just how far it has its head shoved up its colon. Right in the opening credits, it says "And introducing Danielle De Luca." They weren't introducing anything. By the time of this film, Danielle De Luca had already been in two other movies. Somehow, that little nugget of deceit and/or idiocy says more than I ever could.