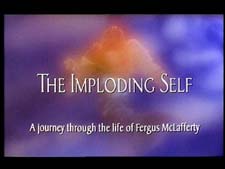 ...Who Went Up a Hill and Came Down a Mountain

The Imploding Self - written and directed by Anna Reeves

This is one of the strangest pieces of film I've ever seen. It's chock full of interesting visuals that would make Terry Gilliam proud, mostly because he's done them already. If you want to call Isabel's interest in her dog in "Bitch" an obsession, then "The Imploding Self" takes the obsession idea to a much greater length, and to a much more interesting effect. This one might make it in "Tales from the Crypt," but I still hardly think it qualifies as coming from beyond the grave. And it most definitely doesn't "lead me down a frightening path to the depths of hell." But it does creep me out a little, and that's a start.

"The Imploding Self" is a trip through the life of one Fergus McLafferty. He's a weird-looking young boy when we first meet him and his uncle gives him some money to buy a pet. Fergus goes down to the pet store, which is just a completely white background, and takes a look at some of the animals, which are also all entirely white. The pet store owner sells him an axolotl, which is an Aztec word for "Holy Sweet Jesus, what the fuck is that?" If you've never seen an axolotl - hell, if you've never pronounced an axolotl - now would be a good time to scroll right on down to the next short, thus maintaining a life where the ugliest thing you've encountered is just Isabel's smimace in "Bitch." An axolotl is like a fish that went horribly wrong. It has gills and lives underwater, but it has legs, as well as a number of other appendages which seem to have no function other than to make the damn thing look uglier. We then see Fergus's birthday party, where three of his little friends want to feed the little freak of nature (the axolotl, not Fergus) in a parody of the three Wise Men. An old, wheelchair-bound relative of Fergus helps him remove a tooth via the doorknob-string-mouth maneuver. Fergus defines the growth of his teeth in terms of the axolotl's ability to regenerate large chunks of its body when injured, which is just proof that nature protects her most repugnant creations as a way of showing us that she can destroy us whenever she sees fit. 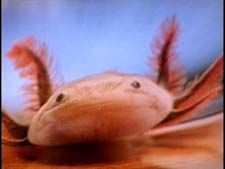 From this angle, it's almost cute. From any other angle, it's what suicide specialists call a "catalyst."

The pain of having a tooth yanked out of his mouth is used as a transition to an adult Fergus cutting himself shaving. Then the water in the sink is used as a transition to a pool. Actually, we first see a swimmer in the sink, then it becomes the same swimmer in a pool, which is sort of bizarre in one of those unnecessary sort of ways. It would have been just as effective, if not moreso, to show the water in the sink and zoom in a bit until it fills the screen, then have the swimmer come on from off camera, showing us that it's a pool. The swimmer splashing around in the sink leaves the viewer with a sense of confusion that lasts just a bit too long and ends up detracting from the smoothness of what would otherwise be a very nice series of transitions. But that's me being a film geek. The point is, the next scene is a bunch of synchronized swimming, and who in the history of watching stuff has ever given a shit about synchronized swimming, aside from synchronized swimmers and occasionally their families? After standing in the water like an idiot for a little while, Fergus is eventually approached by a girl. She introduces herself. Now, I would imagine that Fergus doesn't get too many girls hitting on him, what being a weird-looking, axolotl-obsessed nerd and all, so I can see him not being able to come up with a witty or charming response. But "Oh, we may be related!" is not exactly would I would call the old college try. Luckily for him, they're in New Zealand, where telling a girl that you're her cousin actually works as a pick-up line, and they go off together. Yes, that burning sensation is your brain. 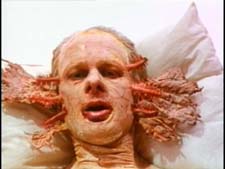 Um, mister? You're sitting on a pile of cabbage. Um, mister? The cabbage, it's... oh, never mind.

We flash forward to a date between Fergus and his new girlfriend/cousin. They're sitting in his bedroom, admiring his axolotl. Well, he's admiring it. She's shielding her eyes from its godforsaken hideousness. They start to make out, but she insists that she can't go on while the axolotl's watching. Fergus informs her that it's blind, and all is well. We step forward again, and now it's their wedding night. Fergus is watching a television show about Mexican cuisine, which of course heavily features the axolotl. Fergus denounces the Mexicans as cannibals, which is ironically the least offensive thing the Mexicans have ever been called on this site. Fergus's new bride enters the room, and he declares that they must change their honeymoon destination to someplace safer. He stares at her pregnant belly, and we see that inside, at least in Fergus's mind, is a thrashing baby axolotl. Believe me, if any woman in the world ever gave birth to something that looked like one of those things, she'd grab it, jam it in a deep freezer, wait until it was frozen stiff, then use it's weird, solidified appendages to gradually saw through her own throat.

We flash forward again, and now the woman is holding a small child and she tells Fergus that he must decide between his family or the fishmonster. He is silent, so she splits. Again, we step forward, and now Fergus is unhappy. He has just gotten out of a long and expensive divorce, and he has no one to share his woes with. No one... but the axolotl! Bum bum BUM! Sorry, I had to spice things up there for a bit. We then see Fergus laying on his back in the middle of the desert in the nude. He has his axolotl in a bowl beside him, of course, as he asks God for direction. In the next scene, God has given him a direction - a direction to cancer! Ha! Seriously, though, he's in the hospital for severe skin cancer all over his body. Probably from laying out in the sun all day in the nude. We hear a doctor and nurse talking. The nurse says his axolotl is dead, but they keep the bubbler going in the tank to keep Fergus's spirits up. Let me tell you, the man's a two hundred pound ball of melanoma. His spirits aren't going anywhere. The nurse also asks the doctor what he thinks of the patient's odd tumor. Fergus peels the bandages off his face, and he's got useless appendages sticking out the side of his head, just like an axolotl! Aaaaand... scene!

This one actually is quite a bit like a "Tales from the Crypt" short. All of the characters are sort of strange and portrayed negatively. Also, it follows the "Tales from the Crypt" pattern. As we all know, if you are obsessed with an animal of any kind on that show, you will eventually gain characteristics of that animal. The two actors who play Fergus as a child and as an adult do excellent jobs. The supporting cast is very strong. You can actually hear all of the dialogue for a change, too. So what is my complaint with this one? Anna Reeves gives the short a very distinct visual style which is highly appealing in a bizarre sort of way. The thing of it is, it's so distinct that it can be instantly recognized as someone else's. It really feels like Reeves just watched "Brazil" and then decided to make a movie. This has "Terry Gilliam" written all over it. Now, if you're going to copy a directorial style, you could choose a lot worse than Terry Gilliam, but the man makes his own movies. There's no reason to try to make them for him. Yes, a large portion of the reason this short works is because of the Gilliam-esque visual style, but that doesn't mean it couldn't have worked in another style. I found myself thinking of shots from "Fear and Loathing in Las Vegas" multiple times throughout "The Imploding Self," and that doesn't do anybody any good. Still, of the shorts we're looking at today, this is definitely the best and the most appropriate. Still not what I'd call a tale from beyond the grave, but at least it lives up to the tradition of its predecessors.