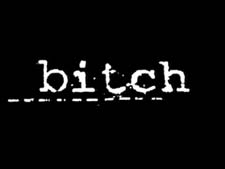 Alright, that last one wasn't exactly a tale from beyond the grave, but at least it tried to be dark. This one... well, I just don't know what this is doing here. It's a stylish piece, with realtime events happening in color and narrated events happening in grainy black and white, almost like an old newsreel. However interesting the direction may or may not be, this short has absolutely no horror elements whatsoever. There is a slight obsession thing that enters in, but it's not particularly important. Really, this is just the story of a woman who loves her dog and gets dicked over by her boyfriend. What makes it interesting is that "Bitch" stars one of the least attractive human beings I've ever seen - and I've watched Polonia brothers movies. I don't really think that's part of the Fiona Samuel's overall statement, but it is something to keep in mind. 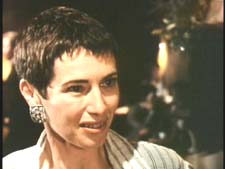 Isabel looks like the lovechild of Mark McKinney and Walter Matthau.

Isabel, the narrator and protagonist, lives with her dog Lucy and her painfully bad haircut, which I named Mr. Kensington. She is currently in a relationship with Paul, who thinks all dogs smell and doesn't want Lucy in his apartment. Boo, Paul! Through Isabel's delightfully idiosyncratic narration, we get a taste of her life (she has no sense of smell) and her relationship history (he was gay). Sadly, she does not delve into the history of Mr. Kensington. Her best friend, a weepy, bug-eyed woman named Ruth, wears contact lenses, but she seems to have problems with them which require other people to help her move the lenses around in her eyes. Perhaps this has something to do with her being so weepy and bug-eyed all the time. Maybe this is why she is so weepy and bug-eyed all the time. We don't know. The point is, when you get Ruthy Dangerfield and Isabel the shemale together at one table, it's sad just how quickly the dog becomes the attractive one in the movie. Ruth asks Isabel how the sex with Paul is. It's a very forward question, which is considered to be just incredibly avant-garde and artsy, so clearly Fiona Samuel is an artistic genius. It also gives Isabel the opportunity to make a repulsive face that only people of British ancestry, i.e. the British, the Australians, and the New Zealanders can make. It's sort of like they're trying to smile and grimace at the same time. I call it a "smimace," and its main purpose seems to be to convey the message, "No, really, my delicate sensibilities haven't been shaken! I swear!" I can't figure out how it's done, but it's just appallingly nasty to look at, and it really doesn't help Isabel's personal appearance issues too much. 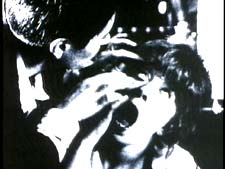 Paul asks Isabel to move in with him, but he doesn't want Lucy to come, so she doesn't do it. The Isabel treats us to a narration of why she doesn't want Paul to do her from behind. It turns out the reason is... the reason is... well she doesn't have a reason, and she's done it that way before, so really she's just being difficult for the sake of being difficult. Finally, a movie that explains female logic as it actually is! While walking Lucy, Isabel sees Paul running down the street with a bouquet, but when she calls to him, he doesn't respond. Later, she finds a contact lens in Paul's bathroom and concludes that Paul is cheating on her. Now that bothers me a little. I mean, of all the things to leave behind at someone's apartment, a contact lens is sort of a major one. How exactly did this "mystery" woman leave without her contact? As someone who wears contacts, it is not impossible to get by with only one, but you sure as hell know when you've only got one. And this lens wasn't lost. Isabel found it right in plain sight. This was not a lost lens, this was a lens someone forgot to put in, which means we're dealing with either a one-eyed woman who freely switches between a contact and a monocle and could thus go out without the lens, a woman who is a complete idiot, or a poorly written movie. You make the call! I'll go to the bathroom! 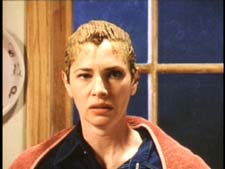 Instead of confronting Paul with the contact lens, Isabel does the smart thing and tells him she can't come over that night, giving him ample time to have crazy sex with his other lover. While she frets over her relationship, Isabel dyes her hair blonde. Now, instead of being dark and ugly, she's ostentatious and ugly. This is clearly a positive change. She talks out loud to herself about Paul, but lo and behold, she gets a response to her questions from Lucy the dog! The dog barks, which Isabel interprets as "Ruth." Lucy then whimpers and lays down (aww...) which Isabel interprets as "Ruth is over at Paul's place, banging him senseless right now." Isabel storms over to Paul's and lo and behold, catches him in bed with Ruth. She hits them both with a pillow. We flash forward a bit, and Isabel is still not talking to Ruth, although she says she's not mad. Naturally, she's not seeing Paul anymore. She takes Lucy for a walk, and passes by Ruth standing behind a fence, barking like a dog for some reason. Isabel then narrates on about how Lucy is her best friend, using precisely the terms she used to describe Ruth earlier in the short. It's all delightful turn-around, as now Ruth is the one who is just barking, whereas Isabel can apparently understand Lucy. Get it? It's symbolism. Kind of. The end.

So Isabel ends up being the morally superior one. Sure, she loses a boyfriend and a best friend, but they were obviously jerks anyway, and she's better off without them. Now, the question is, why the hell is this piece included in "Dark Stories?" Okay, she receives her inside info from her dog, that's a little weird, but people talk to their dogs every day. Isabel doesn't snap and kill Paul for cheating on her, and she's not even upset with Ruth anymore by the end of the movie. Someone please explain to me how a rational, level-headed response to a heightened emotional situation is a tale from beyond the grave. Really, I'm struggling, here. Fiona Samuel put together a fairly well-directed and well-written piece. Some of the black and white bits get too grainy to even make out what's going on, but mostly the switches from color to black and white work smoothly. The narration feels like a real thought process, although some of the dialogue is a bit forced. The star of "Bitch" is clearly Lucy, who never misses a beat. As for the human casting - and I use the word "human" loosely - this was not a good day for the People Who Should Be Allowed Outside Association. Really a major step backwards for PWSBAOA.