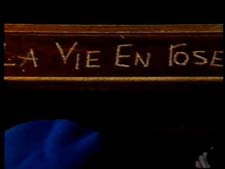 When the title shot of the movie goes off the screen, you know you're in for something good.

She delivered the best of the shorts in "The Imploding Self." Now watch as Anna Reeves tries to do it again, but then gets confused and wonders where she is, and then smokes some more hash. "La Vie en Rose" is what we in the biz call a "high concept" film, which means it has no actual point. A catholic schoolgirl goes into a confessional, where the preacher recites a poem of sorts. I hoped and prayed that this was an actual poem out there somewhere and that Anna Reeves had just adapted it to film. If that was the case, this would be a wonderful little short, if a bit overdone. But alas, all my searching turned up nothing, and since Reeves takes the writing credit, I guess we can assume she wrote this poem as the screenplay for this film.

The poem sort of tells the story of some woman. Each line begins with her name, but the preacher speaks so quickly and his New Zealand/Irish accent is so thick that it's impossible to understand. I looked in the credits, but the letters on the credits are so small that they are nearly unrecognizable, even when I zoom in on them. I think her name is Audrey Foggin, and that's what I'm going to call her from hear on out. Live with it, jerk. Anyway, so each line of the poem begins with "Audrey Foggin" and has the word "rose" worked into it in some way, shape, or form. The poem itself is really just an exercise in how the word "rose" can be used. After each line, we see Audrey enacting something based on what the line said. The whole time, the preacher remains in shadow, except for his mouth. It should be mentioned that both the preacher and Audrey's love interest, Barry, are played by Timothy Balme, star of "Dead Alive." It's sort of sad, since I never had any trouble understanding him in that movie, even when he was being chased by a horde of flesh-eating zombies, but ask him to do an Irish accent, and suddenly he's speaking a mile a minute. Oh well. 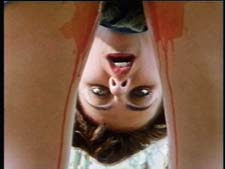 Here's the entire plot... ready.... GO! Audrey Foggin is a nice Catholic girl who meets Barry and falls in love. He promises her everything, but can't deliver. He gets her to forget about Jesus and sin, sin, sin, and she has a baby. The baby dies. Audrey is sad and goes insane. And at some point she has her period.

Whew! Did I miss anything? Wait, let me check. Uh... uh... uh... nope. That's the whole thing, scene for scene. That is, in fact, every action in the entire movie, which is only seven minutes long to begin with. And yet, Anna Reeves somehow manages to bog it down with so much self-indulgent "art" that the movie feels like it needs to be simplified. For instance, for the line "Audrey Foggin bathed in rose water," we've got Audrey in a filthy bathtub with a few rose petals floating in the water, and she's totally visible and totally nude. Now that is enough on its own. People aren't used to seeing complete nudity. Show an audience a nipple, and you've got their complete attention. Throw some pubic hair into the mix, and baby, you've got a scene.

But that's not quite all. See, the filthy bathtub is surrounded by bushes for as far as the eye can see, giving the impression that the bathtub is actually outside. But then we see a shadowy figure peering in on Audrey's nudity through a window, so she's got to be inside. Audrey eventually notices the figure and sits up in the tub. When she does, the figure runs into the background, gets on a bicycle, and rides off. Now, there's only one other character in Audrey Foggin's world - Barry, and the first time we meet Barry, he's riding a very similar bicycle. So chances are good that the peeping Tom is actually Barry. But why would Barry need to peep to see Audrey naked when he's her lover? You see, there are all these questions raised and things to consider, but none of them are even the point. The point comes at the very end of the scene, when we see that there is also a fat little baby in the bathtub. The baby cries, the baby cries, the baby cries, Audrey looks unhappy, the baby cries.... and that brings us to the next line in the poem. I'm not saying that giving people a lot to think about is a bad thing by any means, but "La Vie en Rose" continually gives the audience an overabundance of things to think about, none of which ever seem pertinent. Why should we bother asking ourselves all of these questions? Are they going to be important to the story? Hell no! The story is only seven minutes long! And it doesn't have much of a point to begin with! Every time the poem cuts away to one of these overdone shots, I hear a chorus screeching "ARTSY FARTSY" to some orchestral piece by, I don't know, Brahms or somebody. 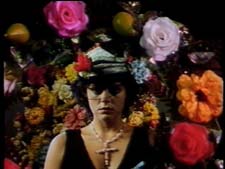 I need to see an explosion right goddamn now.

At the end of the movie, a little more of the preacher's face comes into the light. From the credits, I was able to determine that the preacher and Barry are both Tim Balme, and I think that fact is supposed to strike us when we see the preacher's face. But I watched this thing through four or five times, and I couldn't tell that it was the same person at all. Barry has a very distinctive beard. The preacher is clean shaven. We don't see either man's face for more than a second at a time. I guess if we knew the preacher was Barry, one could make the claim that Barry realized he drove Audrey away from Christ and into sin and eventually madness, and out of repentance he joined the clergy. One could make that claim. One could also make the claim that the other male actor Anne Reeves promised sexual favors to didn't show up on the day of the shoot, so Tim Balme got stuck with double duty. Either way, this is an overwrought piece of cinematic masturbation. Anne Reeves obviously put so much work into creating one visual after another that would be striking to the viewer that she lost sight of the basic rules of filmmaking, such as "Don't make overwrought pieces of cinematic masturbation." The ironic fact of the matter is that the simplest visuals in this piece are actually the most striking - Audrey's eye, a rose tattoo, a pair of lips. It's when Reeves tries to make an epic mural out of every frame that it becomes impossible to know where to look. It's interesting to note that Reeves made this one before "The Imploding Self." So she started with a very complex visual style, then cut away a number of the elements and was left with a derivative style. Perhaps she should cut the Terry Gilliam-esque aspects out of "La Vie en Rose" (oh, and there are some) and see what she has left, then make that her defining visual style. Unless that's also derivative. In any event, "La Vie en Rose" isn't a tale from beyond the grave. It's a Nirvana video gone wrong. And like a Nirvana song, I have no idea what the majority of the words in this movie are supposed to be.

That's all for this week. Check back next time for the the worst of the shorts (oh man, does that one suck), and one of the best (oh man, does that one not suck so much), as well as another appearance by "Dead Alive" hero Timothy Balme! I'll be reviewing the last three shorts and giving my final thoughts on the movie as a whole, including an overall score for everything that is "Dark Stories: Tales from Beyond the Grave." You want it. You need it. You can't live without it. Stay tuned!