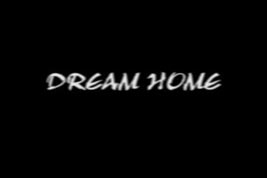 Overview: A couple moves into an old house, only to find themselves beset by vaguely supernatural annoyances.

The Case For: A primarily black cast proves that starring in abominable failures knows no color.

It probably says something about the line of work I'm in when I get genuinely excited when a DVD I'm about to review actually has a menu. It's an instinctual response - I see a menu, and I can't help but think for a few precious, fleeting moments that the movie I am about to watch might not be a colossal wad. Thus, I actually had a moment of hope when I made it past the unskippable trailers - trailers for movies I will inevitably have to one day review - and I found an honest to goodness menu waiting for me. The background showed a small child on a bicycle, staring up at a towering mansion. Very gothic. Very cool. Naturally, this instinctual response of mine is completely retarded, and neither that boy, his bicycle, or that mansion appear anywhere in this movie.

The Netflix envelope for this cinematic disaster asks:

What happens when a young, happily married migrant couple buys their dream home and moves in? Answer: They're greeted by a most un welcoming committee in this haunting supernatural thriller, where terror lurks around every corner.

If you've seen pretty much any horror movie anywhere ever, you should be able to recite the plot of this movie in your sleep. A couple buys a mysterious house whose previous owners died under bizarre circumstances. Naturally, upon moving in, this unlucky couple will be systematically tortured by all manner of supernatural forces until they either die, move out, or burn the house down, sealing its evil away from the mortal world with the healing kiss of flame. Please. You hear that sort of story every day. I had to turn down six different supernatural murder houses just while looking for an apartment. Man, even the Polonia brothers managed to drunkenly stumble through that plot. That's why it's so impressive that Amir Valinia and writer Teiryn M. Fields managed to ruin it so thoroughly. How did they accomplish this feat? Read on, and find out! Alternately, kill yourself now! 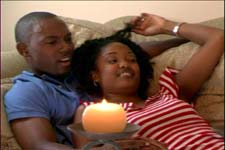 "For the last time, Faye, no, I don't think my name has too many letters in it!"Dream House establishes its blistering pace with nearly five minutes of agonizingly slow, confusingly blurry credits. At last, we meet our two protagonists: Darryll and Faye. Finally, a black leading couple with some real depth. It's difficult to capture the complexity of these two characters with text alone, but God help me, I'm going to try. Bear with me as I summon all the linguistic skills at my disposal to bring these characters to life:

Whew! I don't know how, but I got through it! I - I'm sweating from the effort, but I think that summed them up reasonably well. Wait, wait, no, I can do better. Hold on. Let me try this one more time& Jesus, give me the strength&

They're married. To each other.

Oh man! I didn't think I was going to survive that one, but somehow, I pulled through. As they say, what doesn't kill you makes you stronger, so now I should be a better writer than ever. I think I may have gained a level. 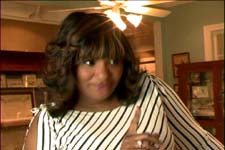 "Daaaayum, sugah, don't you be callin' me no stereotype. Sheeit."But enough about me. Darryll and Faye, those crazy, totally fleshed-out lovebirds, are driving to work, talking about how awesomely married they are. Although they've come this way plenty of times, Faye spots a house sitting along the side of the highway that she's never noticed before. Darryll drops Faye off at her ill-defined workplace, where she confesses her sudden obsession with the house to her coworker, April. April has the tricky job of being the stereotypically sassy black sidekick to a woman who is already a sassy black stereotype. She tackles this challenge with enough "Mmm-hmm, sho' nuff" head bobbing to qualify her neck as a Class-A Slinky. Unfortunately, if she put a little more effort into convincing Faye that maybe she shouldn't rush into buying a magical mystery house in the middle of nowhere and a little less effort into training for the Head Olympics, the rest of this godawful movie could have been avoided.

As luck would have it, the mystery house that suddenly appeared out of nowhere has its own realtor, who is more than happy to show the place to Darryll and Faye. It should be made clear right here and now that this house is most definitely not the one from the DVD menu. That house was an immense, Victorian nightmare with spires, gargoyles, and what could be a clock tower. This house is a ranch with a crappy paint job. Spooky. The ranch does come with its own particular blend of mystique, though. Specifically, screenwriter Teiryn M. Fields seems to have gone to great lengths to avoid attaching any particular price to the house. My guess is that Fields has never bought a house before, since the dialogue between Darryll and the realtor is filled with awkward attempts to avoid naming a specific price, but they don't seem to be able to talk about anything else. It makes sense, in a way. I mean, how much would you charge for a disappearing house situated right on the highway in the middle of an unspecified state? 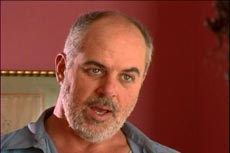 "I... like... the... way... you... talk... mmhmm..."The realtor shows the married couple one room before leaving them to decide on their own. Faye immediately wants to buy the place, regardless of the unmentionable price. Darryll decides to actually look at another room first. Bad move. Going into another room brings them face to face with a scruffy, slow-talking white guy I'll call Slingblade. Personally, I'd have second thoughts about buying a house that comes with its own retard, particularly one who seems to be trying to say that the house is alive, and that it will watch their every move. Alternately, he might just be saying that he wants a hug. I don't know. It's so hard to tell with special people. Slingblade doesn't phase Darryll and Faye, though. They tell the realtor that they want the place, without even mentioning their run-in with the short bus refugee in the living room. The realtor starts to mention something about the previous residents of this murder house dying horribly or somesuch, but he sees that it is upsetting his customers and quickly offers to knock five percent off the unnamable price. What a steal!

Now that Darryll and Faye are set to move in, you can bet that things are about to get spooky. Blood running down walls, trees attacking people, men in bear costumes going down on old men, that sort of thing. Or at least, that would be a good bet if this movie wasn't a complete waste of biological functions.

A blurry graphic informs us that it is "MONTHS LATER," or possibly "MULCH GRATER." Naturally, in all that time, Darryll and Faye have made themselves quite at home, although not so at home that it prevents Faye from immediately saying, "Wow! Look at all the changes we've made!" You know, just in case you didn't get the idea that time has passed. For the record, the two rooms we've actually seen before look exactly the same, and the décor of the rest of the house fits in perfectly, so I don't know exactly what changes she's referring to. Maybe there were only two rooms to begin with, and they've been up to some major construction. Maybe they converted to Buddhism. I don't know, and supremely don't care. What matters is, they've been living for months in a horror movie cliché. They should both be either dead or insane by now. I know I plan to be both by the end of this review. 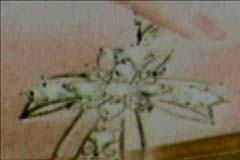 Image distortion!Faye finds a tacky crucifix necklace under a bed. The moment she puts it on, she is besieged by all the horrors of the scary movie netherworld. Color negatives! Overexposure! Crappy Camerawork! However, she ignores these visions and decides to keep the necklace, anyway. She's probably used to having bad reactions to crucifixes. I can't imagine that anyone associated with this movie could stand to touch anything holy.

While browsing for paint at a local hardware store, Darryll overhears the clerk and a customer talking about how people finally bought that creepy house where all those horrible things happened. Recognizing it as his own house, Daryl asks the clerk just what really happened there, but the clerk just brushes him off. Director Amir Valinia then makes a point of showing Darryll paying with a credit card, only to then show him walking out without signing anything. Foreshadowing, or Amir Valinia not-so-subtly saying that how even when they try to pay for things, black people just can't help stealing? You be the judge!