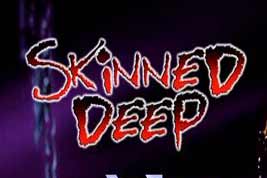 Overview: When a teenage girl is abducted by a family of homicidal freaks and forced to wed one of their own, she must rely on a fairly small amount of cunning to survive.

The Case For: Some creative makeup jobs; Warwick Davis.

The Case Against: Essentially rapes whatever integrity The Texas Chainsaw Massacre had left; Warwick Davis

Of all the classic horror movie setups, none have seen more action than the "travelers experience car trouble and soon find themselves being horrifically butchered by a family of lunatics in the middle of nowhere" premise, with the possible exception of the old "teenagers go on a sexy vacation to a haunted cabin in the woods and are somehow surprised when things go horribly wrong" chestnut. The Hills Have Eyes, Wolf Creek, Turistas (I think - like the rest of the world, I didn't actually see Turistas) - all of these have taken a stab at the premise, but they are merely paying homage to The Texas Chainsaw Massacre. I'm talking about the original, here, not the crappy remake with Jessica Biel, although they could make twenty more movies about Jessica Biel getting killed with a chainsaw and it wouldn't get old.

The Texas Chainsaw Massacre was the first movie to terrify audiences with the notion that those kindly people who help you out when your car breaks down may have more sinister motives in mind, and honestly, it wasn't all that good. I'm sure some of you horror movie nerds just spit partially-chewed Milk Duds all over your Saw 3 t-shirt at that, but it's true. The Texas Chainsaw Massacre kind of blew, and its blowing opened the door for more egregious blowing, and the cycle continued to the point where now the whole premise is so lame that not even an albino midget who kills people by throwing plates at them can make it watchable.

Skinned Deep is the brainchild of writer/director Gabe Bartalos. Now, Gabe Bartalos is a perfectly talented makeup artist. His artistic creations have often been the only good thing about some otherwise perfectly shitty movies, including some of the latter entries into the Leprechaun series. Sadly, at some point ol' Gabe got in into his gin-soaked head that knowing how to make an oozing stomach wound out of latex made him a qualified writer and director. For the record, it did not. 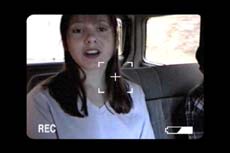 Our heroine. Yaaaaaay.The fun begins with the Rockwell family on vacation. The Rockwell family looks like the Von Trapp family if they got eaten by bears, and then the bears decided to drive across country in a minivan. There's Poppa Bear, A.K.A., Phil, whose enormous facial hair redeems every one of you out there currently sporting a neckbeard. Then there's Mamma Bear, A.K.A. Gloria Jean, a woman whose sheer girth can really only be explained by multiple pregnancies. I don't mean she's pregnant with twins or anything like that. I mean she's pregnant, her arms are pregnant, her knees are pregnant& hell, even her eyelids are just days away from giving birth to little bitty baby eyelids. Kickin' it in the back seat is Baby Bear, A.K.A., Matt, who has clearly inherited his parents' love for eating blonde German children, as well as many delicious cupcakes.

Finally, we have the lesser known, but vitally important to our story, Went-Vegitarian-To-Piss-Off-Her-Parents Bear, A.K.A., Tina, a mousey brunette. As the only member of the family to not be moronically happy about being stuck driving through the desert for hours on end, as well as the only member of the family who has more fingers than chins, we can safely assume that Tina will be the only one to survive longer than fifteen minutes. 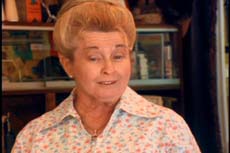 "Come on over to my place for some nice, warm death. I mean, cookies. I mean, death."Sure enough, the minivan blows a tire right outside a friendly-looking diner/convenience store operated by a kindly old woman known only as Granny. Granny tells the Rockwells that her grandson can fix up their car, and in the meantime, they are free to pass the time in her house, just across the road. Now, common sense would say not to go into this house. Stay in the store if you must, but don't go into this complete stranger's house in the middle of nowhere. And yet, the Rockwells go in the house. When the house turns out to be decorated with garbage, hundreds of model airplanes, and dismembered doll parts and broken electronics hanging from the ceiling, a normal family would respond by calmly and politely letting themselves out. And yet, the Rockwells accept an invitation to dinner. Obviously, the Rockwells just really, really want to be killed. 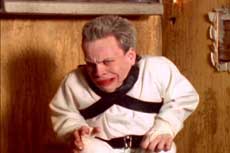 Well hello, new desktop!At dinner, Granny introduces the Rockwells to her own family. First there's Surgeon General, a hulking, silent figure in black. Next is Plates, played by the incomparable Warwick Davis. Three feet, six inches of British fury, you might remember Warwick Davis as Willow from Willow, the Leprechaun from Leprechaun, or, more recently, as Professor Flitwick in Harry Potter and the Oh My God, Is That Warwick Davis? The former Ewok Extraordinaire lends his towering talent to Skinned Deep as a hyperactive albino midget with a bizarre obsession with, as his name might suggest, plates. Although, to be honest, I'm not a hundred percent certain about the "albino" bit. It's possible the character is meant to be albino. It's also possible he's meant to look like the rest of the cast took turns rolling him in baby powder. Either way, he's one pale, plate-loving, midget motherfucker. Rounding out the family is Brain, a sweet-natured, harmonica-playing, perpetually dirty fellow in overalls with a burlap sack over most of his ludicrously gigantic head. 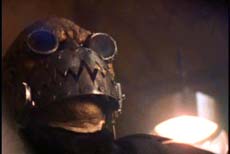 Dental plan! Lisa needs braces!Tina scoffs at the dinner of raw meat, going on a typical moronic vegetarian tirade about how it's wrong to eat animals (this is not meant as a slight against people who are vegetarian for religious reasons, who are just pussies). Even so that is not what causes the dinner to take a turn for the worst. It's when Gloria Jean decides to take a flash photo of Surgeon General that things get ugly. Surgeon General literally rips his own face off, revealing that he is actually a steel-jawed cyborg killing machine. Now, it is worth noting that despite having very prominent pointy metal teeth welded to his face, Surgeon General never bites anyone. Instead, he does all of his killing with a ridiculous hand blade that you can really only get away with using if you're a half-human/half-vampire hybrid in a leather trenchcoat. Surgeon General slices open Gloria Jean's throat, which sends Plates into a fit of hysterically throwing plates at people. Although his name comes from his love of killing people with plates, and although, as we will later discover, he was created specifically to kill people with plates - he carries a pack of spare plates on his back at all times, the man loves his goddamn plates, alright? - it will be some time before he manages to even land a successful hit. For now, he's just breaking china. 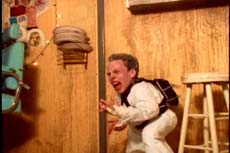 Seriously. Dude loves plates.Eventually, Surgeon General gets around to killing Phil, too. In the meantime, Tina tries to escape through a window, but finds that it has been locked not once, not twice, but five separate times. So, she just smashes it with a chair and escapes anyway. You'd think whoever took the time to put five padlocks on the window would have considered putting in a sheet of glass that doesn't shatter when someone looks at it hard. Oh well.

Tina and Matt make a run for it, but Surgeon General catches up with them with ease and slices Matt in half. When the rest of the evil family (that is, the family that is still alive) arrives on the scene, Brain begs Granny to spare Tina so he can keep her for himself. Then, in the film's most disgusting moment, Brain pulls the burlap sack off his gigantic exposed brain and puts it over Tina's head. The combination of dirt, sweat, brain juice, and shame must make the inside of that bag absolutely revolting. It's no wonder that Tina passes out. Oh, and Surgeon General smacks her on the back of the head. Still, I'd like to think it's the smell that does it.