Back to the "plot": Jessup and Amber have concealed the true nature of their dastardly relationship from the public under the clever guise of a smut mogul and a religious councilman who are having casual sex. They must have met through a Satanic dating service in that there crazy "big" city. Then, Amber and Jessup (I'm calling some people by their character names and some by their real names. I do this because I really don't give a damn) decide they need McGavin to be their political spin doctor, so they don't kill him even though he's stumbled blindly onto their evil, inconspicuous plot to kill virgins and rule the world. They specifically want him even though he's the maverick reporter at a shitty paper where his boss feebly yells at him like a dangly turd from the "Lethal Weapon" police chief's ass, even though he's a bad writer, even though he has the charisma of mulch, because they need him to ensure world domination. Maybe it has something to do with his hat. 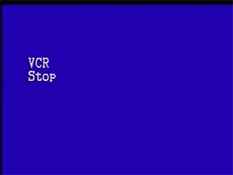 The most exciting part of the video for me.

There's a random no skill henchman who looks like he wanks off to the movie "Clerks" who's supposed to be protecting the evil Satanic mayor / governor / president. He laughs a lot and gets beat up by a Smurf girl. I think he's supposed to be scary because he's like an animal. A disaffected, 20-something, Generation X animal. I've heard of people who didn't make it out of the sixties, but I have a feeling this guy's not gonna make it out of the nineties. At least I hope he doesn't.

Then there's Lucy Frashure's "modeling" scene where she dances in a montage to some (presumably) Ohio rock band's attempts at a song. She's a 21-year old virgin with breast implants who gyrates and rubs herself like she's about to orgasm while wearing almost nothing and trying to make it as a model. Did I mention she's supposed to be a virgin? Yeah, right, I'm more likely to buy that Hitchcock crap or a fuckin' bridge for that matter. This scene's sort of like the bastards who put this "film" together are saying, "Hey, don't shoot yourself, buddy! Here's some boobs. Thanks for sticking in there with us on this whole plot thing. We'll try to get you out of here soon."

For being a movie in a big city concerning persons in positions of great power, there's hardly any people walking around. Ever. There's nobody on the streets except for the principle characters, nobody in the high powered modeling agency except for the president and his receptionist, and only two people at the office of a guy running for mayor or something. Big cities are obviously very efficient.

Let's see, as my life force drains from thinking about this picture, I can only remember that the "nice" girl dies from random green ooze in the bathtub, the token "chubby victim" gets unnecessarily naked while the "Clerks" jerk watches in impish delight, my brain explodes, and then Satan swings by and resolves the plot. Oh, in case you didn't know, Satan is a forty-something bald white guy with big horns and a suit who kills all the bad guys on a technicality and wraps up the plot out of nowhere really quickly. I hate to sound like I wrote this line as if I wanted to say something paradoxical and witty, but "thank God".

So what have we learned from this video? If you want to run for mayor, you have to be Satanic. The Devil, who is a middle aged white guy, is a jerk. Grizzled newspaper reporters are a key recruiting element for the forces of evil. Nobody ever ventures out onto the streets of Cincinnati, Ohio. All the women in the world are sleazy strippers who can't act. Oh yes, and never watch a film made by "B+ Productions".