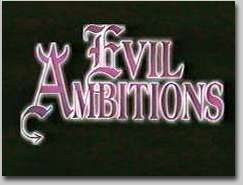 Overview: Some guy runs for public office and tries to conquer the world by making a vague deal with the Devil. It's up to a repulsive reporter to stop him, which he does, but I'm not sure exactly how.

The Case Against: Incredibly long, boring, and fuzzy "plot" is like some kind of painful joke. There's hardly any nudity (except for a woman who looks like my grandma) and nobody can act for a damn. 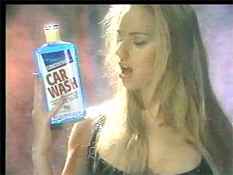 Some "Evil Ambitions" include modeling with a bottle of "Car Wash".

So, you're a pretty twenty to thirty-something woman with breast implants and a hunger for the bright light-big league-blitzkrieg of show business. Where do you go? Ohio, of course! That's right, Cincinnati Ohio, the place that reinvented pasty whiteness is ALSO the entertainment capital of 7th grade boys' pants everywhere thanks to Michael D. Fox, president, founder, producer, editor, waterboy, fluffer, and director for Indi-Edge Pictures. Their motto: "Alfred Hitchcock was a B filmmaker with an A vision." What they fail to mention is Alfred had talent out the whazoo and big-studio backing. It's kind of like saying "Michael Jordan was a high school basketball player with an NBA locker." With that said, let's delve into the world and mind of Michael D. Fox with my first review installment, "Evil Ambitions".

After the breathtaking success of "VAMPS: Deadly Dreamgirls", Fox re-enlisted his army of strippers to make a more "artistic" piece entitled "Evil Ambitions". In this video, the breast parade revolves around some semblance of a plot murkier than a Scottish Loch and dialogue duller than a melted spoon. The story follows Pete McGavin, a reporter who works for "the number three newspaper in a two paper town", and aspiring model Lucy Frashure, who is unaware she has no potential acting talent whatsoever. Lucy goes to this town to make it as a model, not realizing she's about to stumble onto an ambitiously stupid / evil plot to make some guy mayor of this vague, cruddy, semi-rural, "big" city by sacrificing women to Satan.

One of the truly shining aspects of this movie is the editing. An early, typical scene from the video goes as follows:

MCGAVIN'S CAR PULLS UP TO NOTHING IN THE MIDDLE OF SOME NOWHERE OHIO FIELD THAT'S SUPPOSED TO BE NEW ENGLAND OR SOMETHING. A COP WALKS UP TO DRIVER'S SIDE WINDOW. 7 SECOND PAUSE.

COP: Hey, I think there was an Elvis sighting not too far from here.

FIVE MINUTE PAUSE. MCGAVIN THEN SPEAKS WITH ALL HIS MIGHT.

THREE MINUTE PAUSE AS MEN STAND STILL AND STARE AT EACH OTHER. BACKGROUND NOISE IS FROM A CARNIVAL OR A WASHING MACHINE OR A WIND TUNNEL. MCGAVIN EVENTUALLY WALKS OVER TO LESLIE KELLOGG, "NICE" GIRL REPORTER WITH "SMALLER / REAL" BREASTS. 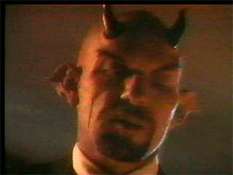 It's the Lord of Darkness, or perhaps a pro wrestler.

Meanwhile, "Councilman Jessup" (the bad Satanist running for mayor or governor or mechanic) and bad girl / model mogul Amber Newman are cooking up quite an elaborate and original scheme to take over the world. It seems that while Jessup pretends on the outside to be a law abiding, very religious political hopeful, he's actually making a pact with the Devil! I didn't see that one coming - a religious guy who in reality is a bad person on the inside! WOW! It's too bad the title "Twister" was already taken because this "film" has more curves than a fat whore. Also interesting to note: if you want to run for mayor of a small town, you should sacrifice your soul to Satan or else you'll never win. After you've done that, you get to take over the world. It's in the political handbook they give you when you go to run for any public office.

Even more horrible than that, our hero McGavin narrates this movie like he expects us to laugh with him instead of at him. He tells us, as he dons his predictably worn out baseball cap and eats his clichéd chili dog that all big city reporters eat because they are so pessimistic they don't worry about their health or the future, "What you need to be a reporter is a stubborn streak, a fundamental lack of respect for authority, and basic typing skills. I'm still working on the typing skills." This is why the movie is truly something awful.