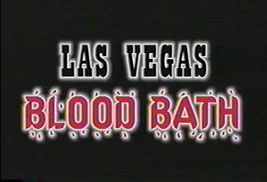 Overview: An angry Jewish man finds his wife in bed with a rent-a-cop, and after weighing his options and looking for a rational decision decides to kill every woman in the world.

The Case For: The abortion scene.

The Case Against: Everything before and after the abortion scene. 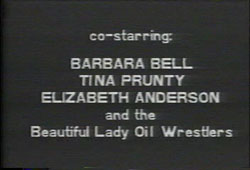 Honestly, if you see this in a movie's opening credits and think it's a good idea to continue watching, you should probably find something more productive to do with your VCR. Like plugging it in and taking a bath with it. If you read SA like I know I don’t you may be aware of a man I like to call Dr. David Thorpe. Thorpe, of course, is responsible for several popular SA features, including Weekend Web and Drew Curtis’ FARK.com. He is also pretty much the biggest prick on the Internet. While browsing the shelves at Old Town Video in Eureka, California he came across a movie with a mutilated pregnant woman on the cover. Since the only thing Thorpe enjoys more than a pregnant woman is a mutilated pregnant woman, he lit a clove cigarette and charmed the socks off the old lady behind the cash register. The old woman naturally became distraught and started looking for her socks, at which point Thorpe shoved the movie in the back pocket of his JNCOs and headed out the door, sniffing the sweet success of old lady feet all the way back to the trailer park. Years later he would trade the movie to Josh “Maxnmona” Boruff for a carton of cigarettes and a couple naked lady air fresheners. Boruff, who swore the movie burned his hands every time he touched it, sent it to another SA writer. The movie has now been passed around the staff more than Johnny “Doc Evil” Titanium, and while it certainly doesn’t smell as bad as Johnny it still stinks.

But however it got to me “Las Vegas Blood Bath” is a simple tale about a simple man and his simple wish to appease his wife’s decapitated head by killing everything with a vagina. While the thought of killing everything with a vagina has certainly crossed my mind from time to time I have to admit I’ve been too timid to try it, mostly because I am a spry, sullen little man and the average woman could reduce me to a pile of viscera and urine-stained blue jeans before I could even throw a punch.

My violent misogyny isn’t totally unfounded. Shortly after the opening title shot (which features that awesome effect where the screen kind of flips backwards and disappears into the upper-left corner of the frame) and the main character’s introduction (which is just a five-minute-long unbreaking still shot of a guy named Sam talking on a phone about a sports car), we are introduced to the first of the movie’s women. Sam’s wife, although she has the general size, proportions, and hair of a Treasure Troll, is a whore. An incredibly ugly whore. So ugly, in fact, every time I think about her my genitals roll up into something resembling a tiny pink turtle shell and disappear into my stomach. I don’t know about you guys but I personally don’t enjoy using a carrot to coax my penis out of my innards every time I need to take a leak.

Despite having a face that looks like a big swollen ham hock Sam’s wife has found a man willing to forget his pride long enough to brave the smells and sounds wafting out of her dark, gooey vagina. He is a cop and possibly the most awkward-looking man in the world when he removes his clothing. The two roll around in a cacophony of slapping thighs and greasy, fast-food-laden grunts when Sam walks in and notices something fishy is going on.

Chances are if you are reading this you aren’t blind, and thus you can see the screencaps on this page. If you are blind you are likely using a computerized reading program to listen to my review, and I would like to offer you and your text reader a single statement: Aasdoian33s2d2aisnd9999asl55inasdpqqqqqqqq. This might not seem like anything profound, but let me remind you of something: There is someone standing in front of you flipping you off right now, and you can’t see him. For the rest of you guys, the ones with, you know, vision, here’s a screencap: 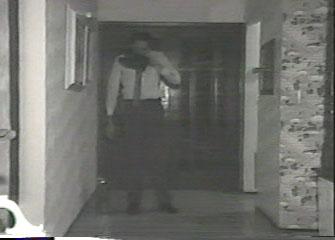 Since the movie’s film quality couldn’t be worse if it required you to wear a paper bag over your head and hit yourself in the face with a hammer every time you watched it, let me explain the shot to you: It is a grown man sniffing a shoe because he doesn’t know who it belongs to. I’m probably going out on some crazy limb here but when I see a strange pair of shoes in my entryway I don’t sniff them to see whose they are. I don’t have some bizarre olfactory memory where I can bury my nose in a Birkenstock and instantly know who stopped by for a visit. I save that kind of activity for my dog, who has a magic radar nose that allows him to headbutt any and all guests directly in their balls before they’re two steps into the house.

After his shoe-sniffing adventure Sam discovers his wife and her lover rubbing their dirty feet together. He picks the cop’s gun up off the floor and “shoots” them “both”. Of course, by “shoots” I mean “gets ready to cut a wicked sneeze or something” and by “both” I mean “kind of sways around a little bit before the scene cuts to a shot of a cat laying on a car”. When you plug the “real meanings” into the sentence you might think it doesn’t make any sense, but a lot of Internet users are afflicted with ADD and HEY MAN LOOK ANOTHER SCREENCAP HOLY SHIT: 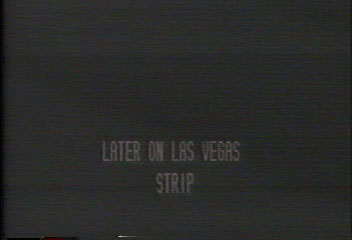 This bit of cryptic, haunting writing segues us into the next scene, in which Sam goes insane and decides every woman in the world needs to die. There’s not a lot to add to that other than this screencap, which shows an old woman who stops, smiles at the camera, and waves at it before walking off frame. At this point you may think you’re watching the goddamn classiest movie in the world, but you’re wrong. If the first ten minutes of this movie are a gas station hot dog and a chilled glass of Night Train 20/20 the remaining time is like sharing your meal with a homeless old crackhead who garnishes his grease-stained paper plate with pus from his mouth-sores.

Sam hops in his bitchin’ businessmobile and after a solid ten seconds of driving finds his first target, a whore wearing a urine-splattered disco ball. After persuading her into his car (he calls her a “filthy whore” and commands her to get in), they hold this interesting conversation (??? kb). Sam drives her to a nice, secluded dumpster behind an auto body shop and commands her to lay down. The prostitute informs him that she is a “lady” and won’t lay there. Sam, the nice guy that he is, throws a dirty old blanket out of his trunk, thus eliminating the shame associated with being a nappy whore who has sex with men by dumpsters in broad daylight. 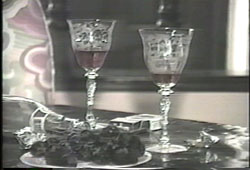 Class. I realize hookers aren’t the brightest ladies to roam the streets. If I was on that show “Cash Cab” I would not use my streetside shoutout to ask a whore the answer to my question, unless said question asked something about STD statistics or how much people will pay to watch a person eat glass while pleasuring herself with a hot radiator hose. But seriously, when your john is calling you a filthy whore and pulling ropes and shit out of his car trunk, how much common sense does it take to get the fuck out of there? I don’t care if I had enough crack to kill Tina Turner floating through my herpes-tainted blood: the second some Balki-looking motherfucker with a knife and a rope told me to lay down behind a dumpster, my stilettos would be click-click-clicking all the way back to the abused women’s shelter.

Sam lays his wife’s severed head by the whore and says “if you give me head, I’ll give you head”. The hooker, having all the reaction time of Strom Thurmond’s festering corpse, kind of goes “ehh” for a second before Sam shoves a knife up under her upper lip. This gets the whore’s attention and this time she kind of goes “ughhh”. Sam ties a length of rope to his car’s bumper and then the whore’s leg, then drives off. The leg gives a little more resistance than your average bundle of straw before it flies away, leaving the whore with only one leg to spread, a nasty labret piercing, and a shiny new dumpster to call home.

With two women and a rent-a-cop dead Sam decides it’s time for a drink. He storms into a bar and orders a drink for himself and his wife’s head, then changes his mind and shoots the bartender in the face instead. On his way out of the bar he sees a bumper sticker (read: a piece of paper taped to a car’s rear windshield) advertising “B.L.O.W.: Beautiful Lady Oil Wrestlers”. Somehow the name of the organization is enough to tell Sam where the ladies are, what they look like, and how they spend their off-time, since in the next scene he is rolling towards their apartment with the determination of – ah, fuck it, the guy can’t act “determined” any more than he can put on a pair of boxer shorts without hospitalizing himself. It’s a plot hole bigger than the gap in his wife’s teeth.

Given the terrible misogyny we’ve seen thus far, it’s refreshing to see women painted as something other than cheating housewives and whores. The women of B.L.O.W. present a positive, forward-thinking look at the fairer gender – instead of being ugly women who have sex for money they’re ugly women who roll around on trash bags covered in baby oil for money. This was a very bold move for a movie made in 1989, a year when most women were still referred to as “mole people” and kept in filthy subterranean dungeons until their male overlords required sex or manual labor.