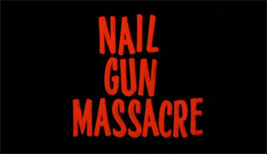 Overview: A gang rape in a small town conjures a serial killing vigilante who wields a nail gun and drives a big golden hearse in pursuit of rapists, construction workers and any other random person. The mysterious man in a taped-up motorcycle helmet dishes out justice, nails and bad jokes in equal measure.

Directed By: First-time and last-time directors Bill Leslie and Terry Lofton, with the story that had to be told.

The Case For: Well, hell, you might just want to see a badass in a motorcycle helmet driving around in a sweet golden hearse and serving up pneumatic justice to a bunch of yokels. No other movie I can think of boasts a demon-voiced antihero telling jokes at the expense of his murder victims.

The Case Against: Pointless dialogue is delivered in random directions, the copious nudity is way more disturbing than the unconvincing murders, and the backwoods atmosphere will leave you feeling stupider than when you started watching the movie.

Unsafe viewed at any speed. Chief among the lessons I have learned from watching home improvement shows is that if you want something done right, either you or Mike Holmes from "Holmes on Homes" has to do it. That guy is Canadian, so pretty much just go ahead and get the supplies and tools you need to do the job. If you want to put a deck in your bathroom, go get some hot glue and pressure-treated lumber. If you want to build a moat around your garage, go get a backhoe and a couple thousand gallons of pitch. If you want to avenge your daughter's gang rape, go get a nail gun and a golden hearse. It's just that simple.

Nail Gun Massacre takes place in a nameless small town in the rural south. They probably mention the name of the town once or twice in the movie, but there's no establishing shot of a sign with the town's name and population on it. Without that I have no concrete sense of location, so let's just make up a name. Nail Gun Massacre is set in New Shittington, South Carolina. It's a town in the throes of economic decline, with jobless families lining up to take cabins in the middle of nowhere as soon as the previous inhabitants are murdered. Despite the recession wracking New Shittington, construction seems to be the biggest source of employment.

He who controls the hat controls the rapeaverse. The movie opens with six men at a construction site dragging a screaming woman over to a pile of sand. They cackle and grin as they hold her down so that the guy wearing the worst hat can rape her. Maybe they take turns based on who has the stupidest hat. Green and white polka dot goes first, followed by the trucker hats, and then if anyone wants to go get a hardhat they can go next. The scene fades out on the redheaded woman's grimacing face as the woozy synthesizer music reaches something intended as a crescendo.

Meanwhile, or possibly days later, or possibly a century before, a fat woman is hanging clothing out in the middle of the woods. She and her dopey towheaded child are either located next to a smoke machine or an ongoing civil war battle. Whatever the source, thick clouds of smoke gust across the scene. They're probably meant to heighten the tension, but they just lead me to question the woman's decision making process about when and where to hang laundry out to dry.

The shack visible in the background proves to be the happy home of woman, child and a foul-mouthed and ill-tempered ape of a man. He screams at Mary-Sue for mishandling of the clean shirt schedule, but his tirade is short-lived. Back outside, Mary-Sue is oblivious to the arrival of a man in a camouflaged jumpsuit and a motorcycle helmet. I'm sure the suspense is killing you so I'll go ahead and reveal that this is the nail gun killer who is about to begin his titular nail gun massacre.

The costume for the nail gun killer is just one of many unnecessarily stupid aspects of the movie. They could have thrown a camouflage suit and a motorcycle helmet on a person, but that wouldn't have been stupid enough. They had to put in that extra effort and use a broken motorcycle helmet with a visor that is half-open and taped over with black electrical tape to create a tiny viewing slot. The camouflage suit is also rendered immediately pointless by the bright yellow scuba tank that is connected by a bright yellow spring of air hose to the nail gun. When the nail gun killer speaks he/she speaks with a modulated "demon" voice that sounds like the villain from a bad videogame.

"Those are the worst headaches," quips the nail gun killer, "right between the eeeeyes, mhahahahaha!"

Not only does this dork in a broken motorcycle helmet kill you, but he has to disrespect you with really terrible jokes right before he finishes you off. Mary-Sue returns to the house with her dullard child in one arm and her empty cardboard laundry box in the other. She steps into the house and finds her man totally disrespected and also dead on the floor. She screams and gags, but we are thankfully spared the threatened puking sequence as she begins a thunderous flight through the woods. Mary-Sue and her child may have escaped the nail gun killer or they may have been murdered. The movie is pretty unclear about that.

After a fade out there is an amateurish credits sequence set to the soothing sounds of the nail gun killer laughing. This fades into a man and a woman rolling around in bed. This scene is about three minutes long and can be boiled down to the woman showing her tits for three minutes and then the man saying "I have to go cut wood." Beneath a leonine mane of 80's hair the tits aren't terrible, so call it whatever you like, buddy. If you make the mistake of watching this movie, enjoy these breasts while you can, as later breasts are ineptly obstructed by hairy man-backs.

The frisky woodcutter and a male companion park their pickup along the side of the road and head deep into the woods in search of a tree. Their gas-powered chainsaw seems adequate for self defense, as chainsaw massacres are generally regarded as overall better massacres than nail gun massacres. Moments after they have disappeared into the woods, a golden hearse arrives carrying everyone's favorite drywall-hanging Goofus.

The woodcutter and his pal locate a sufficiently huge tree for their nebulous purposes, but then the woodcutter's chum feels nature calling. He excuses himself to a more private tree while the woodcutter prepares to do things that would make Captain Planet weep.