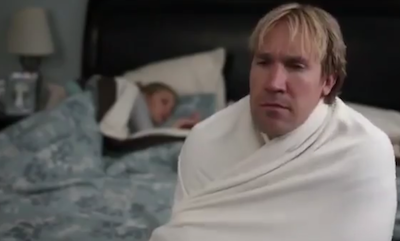 The most traumatic part of Marriage Retreat for us is that Jeff Fahey has been sucked into the vortex of Jesus-themed hijinks, playing the wise yet tough backwoods marriage counselor. Just kidding, that's not even close to the most traumatic part. We already know that he's a man who seems to pick his screen roles based solely on how stupid and unwatchable the premise sounds (links), although even for a man who appeared in a shot-for-shot remake of Carnosaur 3, this is a whole new sort of self-debasement. Apart from the actually being funny once many years ago part, he's like a real-life Homer Simpson!

On the other hand, maybe we shouldn't rush to judgement, because Jeff's character basically spends the entire movie brutally owning all of the mewling evangelicals who come into his marriage fantasy camp. When he's not laying down the sickest of burns on David A.R. White and company (which is just immensely satisfying to watch), he just fucks with their minds. His marriage counseling session with one of the wives ends with him doodling a triangle on her hand with a Sharpie and just saying "figure that out". He literally chains together the married couples, including an extremely pregnant woman, and then drops them in the middle of the wilderness for a long, brutal hike. When you think about it, he's only like one or two beats away from becoming some kind of PG-rated Leatherface protege, which as far as this movie's concerned, makes him our new hero.

Aside from Jeff Fahey mentally slam-dunking all over everyone in sight and further soiling his One Life to Live, there isn't much substance to be found in Marriage Retreat. The rest of the plot is a tedious slog through a list of marriage problems with obvious, Christian solutions:

2. Husband doesn't want a baby (have a baby, like Jesus wants you to)

3. Husband is a soap-opera star (become Nathan Fillion, who Jesus jerks it to)

We had a little trouble figuring that last one out (we admittedly probably don't watch nearly as much One Life to Live as THE LORD-AH), but if you're not Nathan Fillion, apparently Jesus wants to you quit your acting career so you can spend more time with your wife and kid, who are also not Nathan Fillion, which just doesn't make a goddamn lick of sense. Also, we had no idea that "attempted acting" was considered a mortal sin, but after seeing this movie we're starting to come around to the idea.

What we do know lots about is how watching Marriage Retreat voluntarily is the filmic equivalent of giving yourself cancer over and over while being blasted directly in the pee-hole by Johnny Knoxville with a powerwasher full of Louisiana hot sauce and apple cider vinegar. If you think we're exaggerating - something our regular readers know we have never done not once not never no sir - go ahead, make our day(s). If you're not pulling off your own fingernails like a North Korean interrogator by the end of the first 30 minutes you're probably even less human than David A.R. White. And we guess we'll owe you a coke, or something.